Tim Graham
|
Posted: Oct 20, 2021 12:01 AM
Share   Tweet
The opinions expressed by columnists are their own and do not necessarily represent the views of Townhall.com. 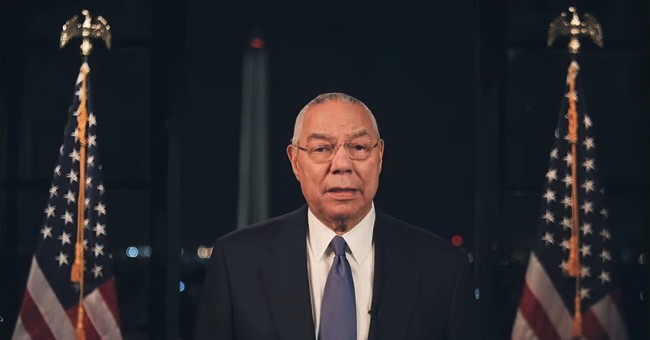 When the sad news broke that Gen. Colin Powell had died of complications from COVID-19, much of the coverage was reverent of his decades of public service and his status as the first black national security adviser, chairman of the Joint Chiefs of Staff and secretary of state.

The most annoying part of Powell remembrances was the media Democrats dragging the Republican Party into it. At CNN.com, Chris Cillizza quickly wrote a piece, "The Colin Powell Republican no longer exists in the Republican Party." This neatly fits the constant CNN narrative that the GOP is now a den of extremists. Cillizza wrote, "in an acknowledgment of how far the party had moved away from his views, Powell no longer considered himself a Republican," noting he said this to CNN's Fareed Zakaria in January.

In 2008, Powell endorsed Barack Obama over Republican maverick John McCain, a fellow Vietnam veteran. Cillizza didn't try to explain why Powell would do that as a "moderate Republican." Powell then endorsed Obama over moderate Mitt Romney, and then endorsed the Democrat against Donald Trump twice. At that point, he should be considered a Democrat. But each and every time, the liberal media treated this endorsement as an immensely valuable possession.

NBC's Andrea Mitchell tried to claim Powell turned to Obama because the GOP was filled with racial resentment, booing a speech at the 2000 Republican convention where he talked up "affirmative action." But we found a video of the speech. All you see is wild cheering for Powell.

Within an hour of the news of Powell's death breaking, NPR "Morning Edition" anchor Steve Inskeep remembered with Mara Liasson how Powell's endorsements were treated as "big media moments," with people "hanging on his every word" for the Obama endorsement. "It seemed like a big moment at the time."

Liasson said maybe it was a no-brainer that the first black secretary of state would back the first black president. But it was "a kind of establishment, good-housekeeping seal of approval." That's what the liberal media loved about it. Obama had next to no experience, no military service, and seemed exotic and global (which they loved). Powell made him more plausibly mainstream and American.

Like Cillizza, Inskeep tried to pretend Powell should still be considered a Republican after 2008, just like the "Republican" Trump haters who populate CNN and MSNBC. He asked Liasson, "How did Colin Powell for, really, the last decade or so represent a particular wing of the Republican Party? I guess we could say an internationalist wing, a national security wing." Liasson agreed. It was "a wing of the Republican Party that believed that America stood for an idea, for values that were defined as a nation not by blood and soil or ethnicity, but by the values that we represent," as opposed to "Trumpism."

This pretends that today's conservatives and Republicans don't believe in traditional American values in foreign policy, like the promotion of an American way -- just in some form of badly disguised racism and xenophobia.

The Democrats in our media would never let a Democrat endorse a Republican in four presidential cycles and keep suggesting he or she was a Democrat, or represented an admirable fraction of Democrats. But Powell's endorsements always allowed them to troll the Republicans.