Tim Graham
|
Posted: Feb 05, 2021 12:01 AM
Share   Tweet
The opinions expressed by columnists are their own and do not necessarily represent the views of Townhall.com. 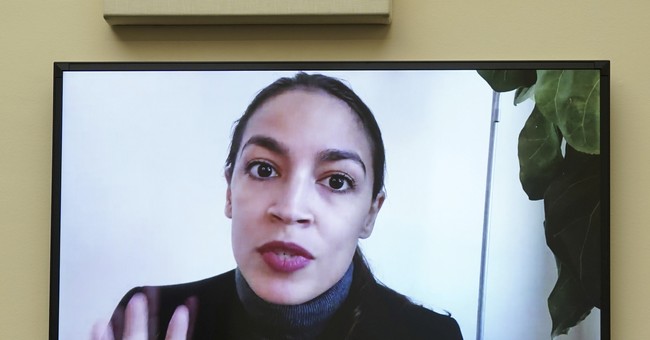 Alexandria Ocasio-Cortez is a darling of the left, not just in the news media but in Hollywood and pop culture venues. She's been on the cover of Time, Vanity Fair, Rolling Stone, Bloomberg Businessweek, New York Magazine and the Hollywood Reporter. She is hailed all over for her social media prowess.

But at a time when these left-wing venues have expressed a massive panic over misinformation on the internet and the need for fact-checking, they don't seem to feel this way about anything spouted by AOC.

In the Feb. 1 CNN "Reliable Sources" newsletter, a top story headline read, "AOC reveals she's a sexual-assault survivor in emotional IG Live." Reporter Oliver Darcy did not use the word "alleged" in front of "assault." There were no questions reporters usually ask -- the questions of who, when or where. All Darcy offered was AOC's emotional wallop. "In an emotional moment on Instagram Live, Alexandria Ocasio-Cortez blasted Republicans as she revealed she is a survivor of sexual assault," he wrote.

"The congresswoman said she was 'getting emotional' because 'they told us to move on, that it's not a big deal, that we should forget what happened,'" he wrote. Ocasio-Cortez characterized the GOP as employing "the tactics of abusers."

Then came the punch. "I'm a survivor of sexual assault and I haven't told many people that in my life," she said. "But when we go through trauma, trauma compounds on each other." So Republicans were carelessly compounding trauma. CNN loved that narrative, pushing the AOC video at least 11 times the next day.

MSNBC's Brian Williams -- no stranger to narrating himself into stressful situations -- touted AOC on "The 11th Hour" on Feb. 1. "The Congresswoman there, Tim, was talking about the possibility of dying during the insurrection," he said. "She also tonight talked forthrightly about being a victim of sexual assault in the past. ... Where do you come down on witnesses if they're half as compelling as the congresswoman?"

These "gatekeepers" of information echoed one another. Twitter, which banned former President Donald Trump, also touted AOC's Instagram Live as breaking news, with a headline reading, "Alexandria Ocasio-Cortez opens up about being a sexual-assault survivor as she describes trauma of Capitol insurrection."

On "CBS This Morning" on Feb. 2, reporter Vladimir Duthiers said, "Congresswoman Ocasio-Cortez recalled the traumatic events inside the Capitol, and the aftermath brought forth another painful memory from her past." On "CBS Evening News," Kris Van Cleave compounded it, saying, "Speaking to more than 150,000 watching on Instagram Live, AOC also revealed she's a sexual assault survivor and criticized the push from the right to move on after the violence."

Everyone should understand the fear and trauma of the riot. But is everything based on emotion here? Did anyone contemplate asking AOC for more details? Apparently, it's rude to check after a traumatic event.

After it was revealed that AOC was not in imminent danger during the riot -- she was in the Cannon House Office Building a block away -- conservatives got the hashtag "#AlexandriaOcasioSmollett" to start trending. This was a bit off, since the attack on Jussie Smollett was fake and the Capitol riot was real. But there was a similarity in the media's dramatic reluctance to question any factual element of the story when it went so viral.

A better analogy is Christine Blasey Ford, who was hailed as a heroine and glamorized on magazine covers as a sexual assault victim without ever having to establish when or where she met or was allegedly assaulted by Supreme Court Justice Brett Kavanaugh in high school.

Perhaps someone can be grateful that AOC didn't name an assailant. But the media's self-proclaimed gatekeepers sometimes let the gates swing wildly open when there are Republicans to be shamed as akin to sexual abusers.