Tim Chapman
|
Posted: Jun 09, 2021 12:01 AM
Share   Tweet
The opinions expressed by columnists are their own and do not necessarily represent the views of Townhall.com. 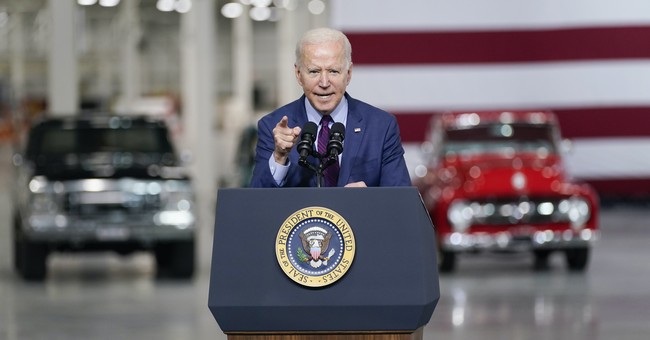 Will the third time be the charm?

Will a third dismal jobs report finally cause President Joe Biden and the Democrats to realize the economic disaster they’ve created?

The jobs report released last week revealed that employers hired 100,000 fewer workers than expected in May. April was even worse: Unemployment spiked as the number of new hires missed the mark by more than 700,000.

This hiring problem isn't for lack of jobs. Nearly half of America’s business owners have available positions they’re trying to fill. They just can’t fill them—and Joe Biden is to blame.

Back in March, Democrats in Congress passed and Joe Biden signed a $1.9 trillion stimulus bill that pays jobless workers an extra $300 each week. It nearly doubles the amount the average unemployed worker already receives from state unemployment programs.

No wonder unemployment is soaring and businesses are suffering. Biden is paying jobless workers more to sit at home than they’d earn working full-time. But the Democrats are denying the proof right under their noses that their policies created this hiring crisis.

And the proof goes beyond just the jobs numbers. Businesses across the country are taking extraordinary steps to break down the barriers Biden built up to stop them from hiring.

For starters, they’re boosting wages to attract new workers and keep current ones. Some companies are offering signing bonuses of up to $2,500 to people who simply accept a job with them. Others are giving current employees hundreds of dollars for referring people to apply for open positions.

For a good dose of irony, look to Michigan, where restaurants and hotels are begging the state to give them federal stimulus funding so they can use it to offer hiring bonuses to new recruits. They’re trying to use Biden’s “American Rescue Plan” to combat the jobs disaster Biden’s policies have imposed on them.

In the words of one small business owner from New Jersey, “It’s impossible to get help right now. … If they keep giving these extra benefits, there is no reason for people to get out and work.” The Democrats are looking everywhere but the mirror to blame for their failure. Some are even blaming companies—countless of which have struggled to stay afloat after a year of shutdowns—for not paying workers more.

The evidence is clear that Biden’s payouts are holding workers, businesses, and America back. The good news is that Republican governors are acting swiftly to undo the damage. Twenty-five Republican-led states have shut off his work-discouraging giveaways before they’re set to end in September.

Even some state Democrats have felt enough heat from businesses that they’re starting to follow the GOP’s lead. In North Carolina, Democrat Governor Roy Cooper (D-NC) issued an executive order requiring unemployed workers to prove they’re looking for work before they receive extra cash from Biden. And he may soon face a decision to veto or sign a bill that would stop the extra benefits altogether.

It seems that the coronavirus and trillions of dollars spent in federal aid are what it takes to relearn the lessons of 1990’s-era welfare reform: Paying people not to work results in fewer jobs.

It is time to end Biden’s job-killing policies, for the good of workers and families. The pandemic is subsiding, Americans are aching to get back to normal, and the businesses that can lead the way back are ready to roar. But they can’t do that if they don’t have workers.

Predictably, some Democrats want to make the Biden giveaways permanent and even make the handouts more generous. This, of course, should be rejected. The longer workers stay unemployed, the harder it is for them to get a job in the future, and the longer they’ll depend on the government for their basic needs. Not only do they miss out on the dignity that comes with hard work; they lose skills they’ve already built up and face higher risks of physical illness, mental breakdown, and poverty.

We’re less than one month away from what could be another disappointing jobs report. It’s time for the Democrats to face the facts. Their anti-recovery economic agenda only leads to fewer people working and more government dependency. That’s bad news for America’s economy and businesses. But it’s even worse news for America’s workers.

Tim Chapman is the Executive Director of Stand For America, an advocacy group dedicated to promoting public policies that strengthen America’s economy, culture, and national security.