Democrats Are Terrified of Georgia

Tim Chapman
|
Posted: Apr 19, 2021 12:01 AM
Share   Tweet
The opinions expressed by columnists are their own and do not necessarily represent the views of Townhall.com. 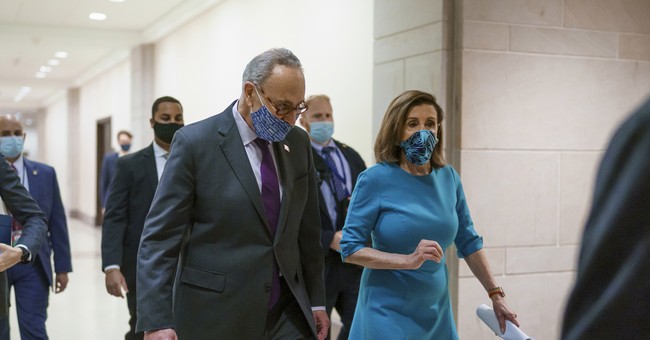 Georgia’s voting reform success has the liberal coalition on high alert. Why? Because the left fears common sense voting reforms will stand in the way of their dream—a federal takeover of state and local elections.

By now we are used to the unholy alliance between liberal activists, the media, and Democratic lawmakers. But the Democrats have recruited a new member to join in their assault on GOP voting bills: corporate CEOs.

What motivated big businesses to join the fray this time? It’s simple. They see it as an opportunity for woke virtue signaling. It’s easy to speak out against so-called “racist” voting laws if it boosts their bottom line.

For the Democratic Party, the motivation behind the GOP voting law attack is more strategic. And it’s rooted in pure power politics. They know they must sway public opinion against election efforts like the one in Georgia. They have to in order to maintain momentum toward the real prize they seek—passage of Nancy Pelosi’s dream election bill, H.R.1.

This is the real reason for the massive, coordinated (albeit deceitful) assault the far left has launched on states’ sensible voting reforms. It’s why politicians and activists convinced corporations to rally with them and condemn Georgia’s voting bill as “Jim Crow” legislation and a “blatant attack” on voting rights. They claim it suppresses votes, even though it actually ensures a more open voting system than many blue states.

Now the woke apparatus is aiming its arrows at Texas and Arizona, where GOP-led voting reform bills are advancing through state legislatures.

Democrats and their CEO sidekicks already lost the battle in Georgia. And they’ll likely lose in Texas and Arizona, where election bills are expected to pass. But their attacks have only gotten stronger, and their complaints have only gotten louder.

That’s because the Democrats are playing the long game, not the short one. They want to shame prudent state voting reforms so people will support Pelosi’s “For the People Act” (H.R.1)—which has passed in the House and is coming for the Senate soon. Pelosi’s bill is not only the antithesis of good laws that states like Georgia, Texas, and Arizona are passing. It would overrule these laws—along with all other state voting laws—and replace them with the Democrats’ favorite error-prone practices, like ballot harvesting, automatic voter registration, and a provision that allows the government to pay for campaigns.

If you thought the 2020 election was disorderly, confused, and riddled with abuse, wait until you see an election that takes place after the passage of the Pelosi bill - and that is by design.

Indeed, the good reforms in Georgia and the proposed reforms in states across the country stand diametrically opposed to the so-called reforms in the Pelosi bill. These are two completely different visions for the future of the country. On one side, you have the rule of law, the principles of free and fair elections, and real efforts to ensure that every vote cast is legally counted. On the other, you have cynical attempts to dilute the value of those principles while ushering in practices that will undermine the integrity of all future elections.

Conservatives are winning the fight to protect our elections. The only way the far left can take the upper hand is if they get people to believe the lie that GOP laws will doom American democracy while H.R. 1 will save it. They wouldn’t be lying so loudly and aggressively if they didn’t realize how much the truth threatens their plan to take control of our elections.

That’s why Americans who support the rule of law and legal and fair elections must speak the truth loudly, clearly, and calmly. They need to keep repeating the facts about the merits of bills like Georgia’s and exposing the flaws of H.R. 1. It’s the only way to preserve the integrity of our elections and keep our voting systems out of the hands of deceptive Washington politicians.

Tim Chapman is the Executive Director of Stand For America, an advocacy group dedicated to promoting public policies that strengthen America’s economy, culture, and national security.