Tim Ball
|
Posted: Feb 15, 2019 9:49 AM
Share   Tweet
The opinions expressed by columnists are their own and do not necessarily represent the views of Townhall.com. 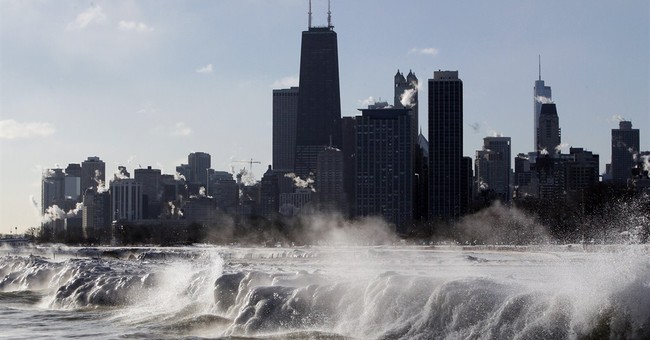 Editor's Note: This column was co-written by Tom Harris

Americans used to call an outbreak of cold air from Canada an “Alberta Clipper.” It's also the name for a low-pressure system track. Now, in an attempt to promote the hypothesis that humans are causing dangerous climate change, they call it a “polar vortex.” Global warming supposedly causes these vortices to break away from their normal positions around the poles and move to more southerly latitude, bringing frigid Arctic conditions to the northern United States.

This idea is completely wrong but conveniently masks the illogic climate activists face since real-world observations contradict their claim: we are seeing more cold outbreaks despite the belief that we are in a period of warming.

Dr. John Holdren, a former science advisor to President Barack Obama, created the polar vortex term and pronounced its supposed global warming connection from his pulpit at The White House. This is the same Holdren who proposed compulsory abortions and mass sterilizations. He argued that abortions could occur under the existing Constitution, saying,

It has been concluded that compulsory population-control laws, even including laws requiring compulsory abortion, could be sustained under the existing Constitution if the population crisis became sufficiently severe to endanger the society.

Holdren denied still holding these views during his Senate approval hearings for his position as Obama’s science czar, but his stance was so extreme that it cannot simply be swept under the carpet. Besides the fact that he was completely wrong on this too—there is no population crisis—it illustrates Holdren’s ability to distort reality to bolster his agenda, a skill honed throughout his career. Notice how he controls all the parameters. He concludes that compulsory laws “could be sustained,” and he decides when a crisis is sufficiently severe.

This approach parallels how environmental extremists identify problems and demand solutions even when the problems don’t exist. Invariably, they take normal events and identify them as abnormal and, then promote solutions that fulfill their global governance agenda. It works because people don’t know what is normal. In Agenda 21, the United Nations’ global control plan, they provide justification for acting without significant evidence. In Principle 15, we can see a clause eerily reminiscent of Holdren’s proposal:

In order to protect the environment, the precautionary approach shall be widely applied by States according to their capabilities. Where there are threats of serious or irreversible damage, lack of full scientific certainty shall not be used as a reason for postponing cost-effective measures to prevent environmental degradation.

This is the standard environmentalist’s fallback precautionary principle: we should act anyway, just in case. Like Holdren, they determine the problem and control all the decisions.

The easiest way to get people to think something that is normal is a new problem is to create a new name for it. That is what Holdren did with the polar vortex. Yet, outbreaks of cold Arctic air and accompanying blizzards are well documented in folklore and scientific reports. Historian and meteorologist David Ludlum documented them in dozens of books, including Early American Winters, 1604-1820 and Early American Winters II, 1821-1870.

Our understanding of cold outbreaks began when World War II pilots discovered the Jet Stream that flows around the Poles in both Hemispheres. Pilots returning from bombing raids against the Japanese found their trips home much quicker than their outbound trip when they flew within the Jet Stream, a fast-moving river of air that flows from west to east at about 10 km altitude.

The Jet Stream coincides with the boundary between the dome of cold air sitting over the poles and the warm tropical air in between. As the Jet Stream moves through the atmosphere, large waves develop called Rossby Waves.

There are two major patterns which occur over time. Zonal Waves are low amplitude, that is, their north/south range covers just a few degrees of latitude. Weather associated with this pattern has predominantly northwest winds in winter and southwest in summer. Temperatures and precipitation vary, but the variation is small. General weather conditions change every 4 to 6 weeks as the waves migrate from west to east.

Meridional Waves are high amplitude waves pushing much more toward and away from the Pole. This results in precisely what we are seeing now—frigid Arctic air moving south to normally warmer latitudes and warm tropical air pushing into polar latitudes. Associated weather includes winds predominantly from the north and south with greater extremes of temperature and precipitation. These Waves migrate from west to east as well, but often more slowly than Zonal Waves, so weather patterns tend to persist for longer periods. This creates problems because any prolonged and persistent pattern is hard on flora and fauna, including humans.

Over the centuries, there are periods of predominantly Zonal or Meridional Waves. Meridional Waves mark a global change from warm to cold. Right now the world is cooling, a trend that began in 1998. Despite the hysteria of alarmists, the global temperature dropped 0.56°C between February 2016 and February 2018 and dropped further still in 2018. This makes a mockery of the claim that a 0.6°C warming in 120 years was proof of catastrophic human-caused warming.

The polar vortex/global warming myth is just one example of how effective the propaganda machine is in taking the normal and creating the illusion that it is abnormal. It shows once again why the human-caused global warming/climate change scam is the biggest fake news story in history.