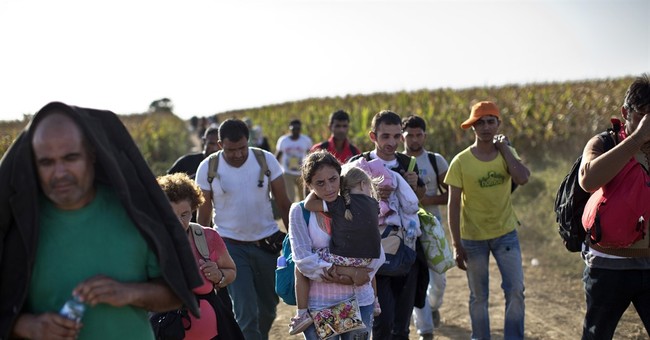 There's a giant migration, emigration, refugee problem in Europe. What the United States has been dealing with in dribbles and drabs (relatively) the European nations are swimming in. And they are falling all over themselves, each other, and the hole in their thinking in failing to come up with realistic solutions.

The progressives in the United States think we should shoulder the burden of our own illegal immigrants willingly, openly, compassionately. But that isn't the real problem in Europe. Our immigration situation is at least shared with those who are our cultural brothers and sisters. The émigrés from the Middle East who flood Europe are at odds with almost everything for which European culture stands.

As usual, the debate in the European situation begins at square two--what do they do to care for all these desperate people who are moving away from wars, literally of their own making.

Of their own making? Yes, few, if any, of those fleeing did anything to stop ISIS or whoever else is making mincemeat of their people (Saddam, Khomeini, et. al.). How do we know they didn't do anything--because they are still there to flee. But, claim the defenders of those who flee, there were guns involved, and weapons of mass murder. That's how marauders and barbarians work...not indoctrination or even intimidation, but simple widespread murder. Those waging war in the Middle East supposedly have a reason, those who are in their way clearly have an excuse.

There are those who don't offer excuses, they offer resistance and refusal, they offer their principles, they fight--to the death if they have to. That is square one. "Who does that?" ask the politically correct. We did--in 1776. The French did not in 1940. The British did from 1939 to 1945. The Chinese did not in 1931.

In offering this solution (and remember the colonists fought in 1776 with shovels and broom handles and swords and knives as well as guns) no one is going out on a limb--we are at the end of the limb, sometimes one just is. On the 150th anniversary of the Bill of Rights Eleanor Roosevelt intoned "It is not fair to ask of others what you are not willing to do for yourself." She then wondered if she had lived her life in a worthy manner that reflected the honor of the men who were dying for her right to be free.

The refugees who are flooding Europe are there because they don't know how to fight, or, literally, why to fight, so they want others to do that for them. The fight is unfair they say, so they run. But all fights are unfair. The colonists in our history fought the most powerful nation on earth--that did not daunt them. And we live, humbly, in their shadow. This nation is free because people were willing to die for their beliefs and for eternal truths; were willing to die for others: their children, grandchildren.

Those who run from the fight with ISIS don't want freedom, they want a free ride. They want to throw themselves on the mercy of the welfare systems of the countries at whose doorsteps they cry for protection, while decrying the political systems and religious foundations and culture of their sought-after benefactors. The long-term conflict that will result from this situation is far worse than the immigration Europe faces today.

Who said life isn't fair? Oh yes, John F. Kennedy, and myriad leaders before him, back to Socrates. It surely isn't fair, and what is most unfair is for people to seek protection, succor, and life so they don't have to fight for themselves while asking others to die for them. This might sound harsh but that's because life can be harsh.

Can these folks really fight for themselves? You bet, they just need encouragement (what General George Patton used to call a kick in the pants) and materiel, of which we have plenty, and courage and principles.

If they lack the latter they will not earn their freedom, and freedom that is earned, not given or bestowed, is the only kind that counts. Real freedom is kept because it is paid for with real lives; that which is given is lost because the recipient never understands it in the first place

It is no fun being politically incorrect--it always nets slings and arrows--but sometimes it is just necessary when one is faced with reality. So, good luck, Europe. How's all that political correctness workin' for ya'?