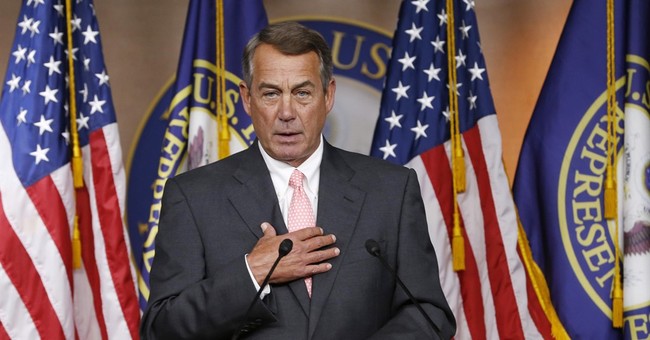 The impending departure of Speaker of the House John Boehner gives the House Republicans a real opportunity to accomplish something. But an opportunity is not a guarantee. It is a little like a football team being first down and goal at the ten-yard line.

You have a good chance of scoring a touchdown from there -- if you can get your act together. But you could also find yourself having to settle for a field goal. Or for a missed field goal.

And of course you can also fumble the ball and have the other team grab it -- and run it all the way back across the field to score a touchdown against you. With Republicans, it would be chancy to make a bet as to which of these scenarios is most likely.

Speaker Boehner had a tough hand to play, given the internal splits among House Republicans. But Boehner's biggest problem was Boehner. And it is a recurring Republican problem.

Nothing epitomized Boehner's wrong-headedness like an occasion when he emerged from the White House, after a conference with President Obama and others, to face a vast battery of microphones and television cameras.

Here was a golden opportunity for Speaker Boehner to make his case directly to the American people, unfiltered by the media. Instead, he just walked over to the microphones and cameras, briefly expressed his disgust with the conference he had just come from, and then walked on away.

Surely Boehner knew, going into this White House conference, that it could fail. And, surely, he knew that there would be an opportunity immediately afterwards to present his case to the public. But, like so many Republican leaders over the years, he seemed to have no sense of the importance of doing so -- or for the time and efforts needed to prepare for such an opportunity beforehand.

Whoever the next Speaker of the House is, someone should have a plaque made up to put on his desk -- a plaque reading: TALK, DAMMIT!

If the political situation in Washington is such that many of the expectations of Republican voters cannot be met, then at least take the time and trouble to spell that out in plain language to the public.

Maybe the smug consultants in Washington don't think the public can understand. But Ronald Reagan won two landslide elections by doing what subsequent Republican leaders disdained to do.

In between, he accomplished what was called "the Reagan revolution" without ever having a majority in both Houses of Congress. He could go over the heads of Congressional Democrats and explain to the public why certain legislation was needed -- and once he won over the voters, Democrats in Congress were not about to jeopardize their reelection chances by going against them.

One of the secrets of Reagan's political success was a segment of the population that was called "Reagan Democrats." These were voters who traditionally voted for Democrats but who had been won over to Reagan's agenda.

Contrary to the thinking -- or lack of thinking -- among today's Republican leaders, Reagan did not go to these Democratic voters and pander to them by offering them a watered-down version of what the Democrats were offering. He took his case to them and talked -- yes, TALKED -- to let them know what his own agenda offered to them and to the country.

Today's Republicans who proclaim a need to "reach out" to a wider constituency almost invariably mean pandering to those groups' current beliefs, not showing them how your agenda and your principles -- if you have any -- apply to their situation and to the good of the country.

You won't swing a whole constituency of Democrats your way, and neither did Ronald Reagan. But he swung enough of them to win elections and to force Congressional Democrats to respect the "Reagan Democrats" he had won over.

There are issues on which Republicans can appeal to blacks -- school choice being just one obvious and important issue. And it is unlikely that all Hispanic voters want open borders, through which criminals can come in and settle in their communities.

But unspoken words will never tap these sources of votes, nor perhaps even convince Congressional Republicans. And if the quarterback is unsure what to do, being first and goal on the ten-yard line may not mean much.