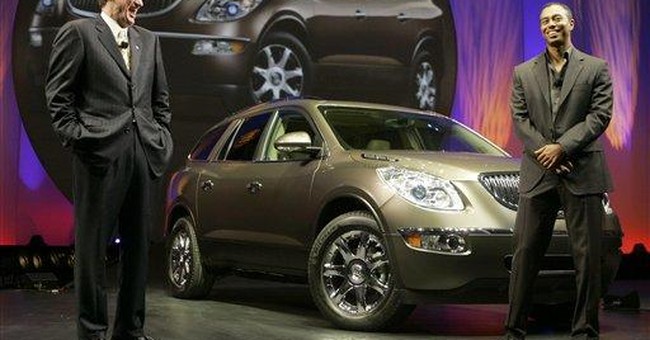 There is an old Russian fable, with different versions in other countries, about two poor peasants, Ivan and Boris. The only difference between them was that Boris had a goat and Ivan didn't. One day, Ivan came upon a strange-looking lamp and, when he rubbed it, a genie appeared. She told him that she could grant him just one wish, but it could be anything in the world.

Variations on this story in other countries suggest that this tells us something about human beings, not just Russians.

Too many people are like Ivan, who wanted Boris' goat to die.

It is not even that the average corporate CEO makes as much money as any number of professional athletes and entertainers. The average pay of a CEO of a corporation big enough to be included in the Standard & Poor's index is less than one-third of what Alex Rodriguez makes, about one-tenth of what Tiger Woods makes and less than one-thirtieth of what Oprah Winfrey makes.

But when has anyone ever accused athletes or entertainers of "greed"?

It is not the general public that singles out corporate CEOs for so much attention. Politicians and the media have focused on business leaders, and the public has been led along, like sheep.

The logic is simple: Demonize those whose place or power you plan to usurp.

Politicians who want the power to micro-manage business and the economy know that demonizing those who currently run businesses is the opening salvo in the battle to take over their roles.

There is no way that politicians can take over the roles of Alex Rodriguez, Tiger Woods or Oprah Winfrey. So they can make any amount of money they want and it doesn't matter politically.

Those who want more power have known for centuries that giving the people somebody to hate and fear is the key.

In 18th century France, promoting hatred of the aristocracy was the key to Robespierre's acquiring more dictatorial power than the aristocracy had ever had, and using that power to create a bigger bloodbath than anything under the old regime.

In the 20th century, it was both the czars and the capitalists in Russia who were made the targets of public hatred by the Communists on their road to power. That power created more havoc in the lives of more people than czars and capitalists ever had combined.

As in other countries and other times, today it is not just a question of which elites win out in a tug of war in America. It is the people at large who have the most at stake.

We have just seen one of the biggest free home demonstrations of what happens in an economy when politicians tell businesses what decisions to make.

For years, using the powers of the Community Reinvestment Act and other regulatory powers, along with threats of legal action if the loan approval rates varied from the population profile, politicians have pressured banks and other lending institutions into lending to people they would not lend to otherwise.

Yet, when all this blows up in our faces and the economy turns down, what is the answer? To have more economic decisions made by politicians, because they choose to say that "deregulation" is the cause of our problems.

Regardless of how much suffocating regulation may have been responsible for an economic debacle, politicians have learned that they can get away with it if they call it "deregulation."

No matter what happens, for politicians it is "heads I win and tails you lose." If we keep listening to the politicians and their media allies, we are all going to keep losing, big time. Keeping our attention focused on CEO pay-- Boris' goat-- is all part of this game. We are all goats if we fall for it.