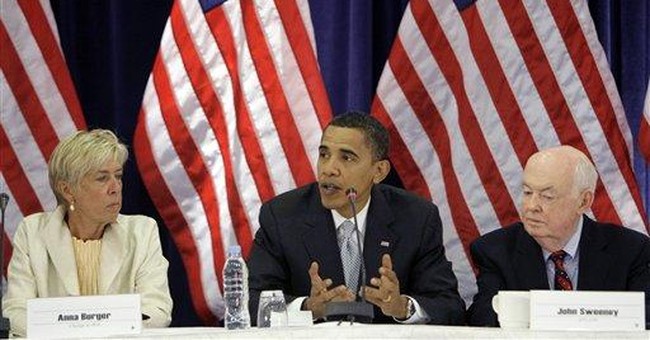 We take it for granted that a vote means a secret ballot but it was not always that way. Moreover, it will not remain that way for workers who vote on whether or not they want a labor union, if legislation sponsored by Congressional Democrats and endorsed by Senator Barack Obama becomes law.

Before there were secret ballots, voters dared not express their true preferences if those who watched them vote could retaliate-- whether by firing them, beating them up or in other ways.

Anyone who is serious about people being free to express themselves with their votes wants a secret ballot.

Since unions are losing the game under the current rules, their obvious answer is to change the rules. Specifically, they want to do away with secret ballots when the government conducts elections to determine whether the workers in a particular company or industry want to be represented by a union.

With labor unions being major supporters of the Democratic Party-- spending hundreds of millions of dollars in this year's election campaign-- it is hardly surprising that Congressional Democrats have lined up solidly behind legislation to let union organizers simply collect signed cards from a majority of workers, in order to be certified as the officially recognized union for those workers.

Of course, the union organizers will then know who did and who did not vote for them. And they may have long memories or short fuses, or both. Moreover, the workers themselves know that, so they may find it prudent to sign up for a union, whether they want one or not.

This legislation passed the House of Representatives last year but did not make it through the Senate. "I will make it the law of the land when I'm President of the United States," Barack Obama has said to the AFL-CIO.

Neither are the environmental extremists who support the Democrats called special interests. But the green zealots who have for decades blocked the country from using oil within our own borders-- more oil than in Saudi Arabia, by the way-- are also among the special interests with a big voice in the Democratic Party.

They are also a major factor in shutting down the democratic voting process-- in this case, in the House of Representatives, where Speaker Nancy Pelosi refuses to allow a vote on drilling for oil in places where the green zealots don't want drilling.

The Congressional Democrats could of course vote to continue forbidding drilling in those places. But voters paying $4 a gallon for gas are not likely to agree with the green zealots-- and recent polls show that they do not.

Rather than lose votes in the November elections by voting with the green zealots, or lose the money that the green zealots contribute to the Democratic Party coffers, Nancy Pelosi simply shut down the House of Representatives, so that there could be no votes, and turned off the lights so that C-SPAN could not broadcast Republicans' speeches protesting what happened.

After all, what is democracy compared to support from the green zealots?

It is the same story when it comes to the teachers' unions, the biggest special interest of all in the Democratic Party. They not only contribute money, they can contribute people who walk the precincts on election nights, rounding up the faithful to go vote.

Even the Congressional Black Caucus dares not vote for vouchers or any other form of school choice that the teachers' unions oppose. Better to let a whole generation of black children be trapped in failing schools that employ union teachers.

But special interests? Not at all.