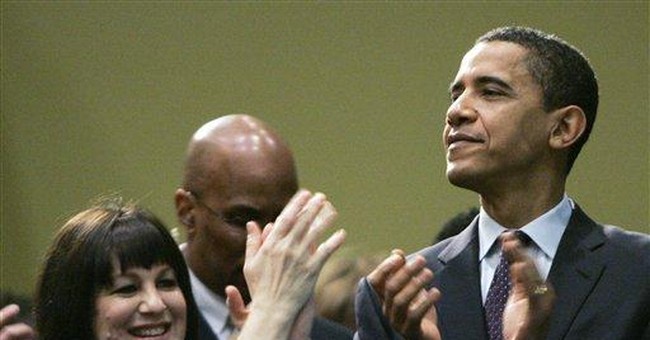 Whatever one may think about Barack Obama as a candidate or as a potential President, his candidacy has brought something new to the American political scene.

His stunning victory in the Iowa caucuses, in a state where more than 90 percent of the population is white, was an unmistakable signal that racism is not the invincible thing that some seem to think it is.

Unlike Jesse Jackson or Al Sharpton before him, Obama has not been running as a black candidate for symbolic purposes but as a serious contender who happens to be black.

Into this upbeat national scene Bill and Hillary Clinton have brought race back as one of their many sleazy tactics to try to win in any way possible, whether clean or dirty.

First, there were the surrogates bringing up youthful peccadillos that Obama had already admitted in his autobiography. They milked this for all it was worth.

Then came the claim from the surrogate that his statement was misinterpreted, which got still more media time.

But these cheap shots have been by no means as poisonous as Bill Clinton's obvious attempts to reduce Obama to just a black candidate.

Even after much of the media had gotten on him for this, Bill Clinton returned to that theme after Hillary lost the South Carolina primary big time, by saying that Jesse Jackson had won South Carolina before.

If Hillary wins the White House, that will mean 16 consecutive years -- and perhaps 20 -- in which Presidents of the United States have come from just two families.

Surely the country is not that lacking in political leadership.

Incidentally, those who have been shocked that John McCain's age has been brought up as a political issue should brace themselves for the inevitable and repeated raising of that issue in the general election if Hillary Clinton is the opposing candidate.

Hillary herself will probably not raise the age issue but she has all sorts of surrogates who will, including the surrogate in chief, Bill Clinton.

When Bill Clinton first ran for the White House in 1992, his fawning fans coined the term "Billary" to highlight the fact that Hillary was part of the team -- "two for the price of one," as they liked to put it.

We need to keep that in mind today and not let Hillary escape responsibility for what her surrogates do.

At the same time, we need not let the radical feminists get away with depicting Hillary Clinton as representing some potential breakthrough for the independent woman.

When Margaret Thatcher became Prime Minister of Britain, she did not do it by riding on her husband's coattails. Neither did Indira Gandhi in India, Golda Meier in Israel or other women who rose to be leaders of their countries in other parts of the world.

The whole bean-counting mentality -- the first woman, the first black, the first this, the first that -- is an unbelievably irresponsible self-indulgence at a time when Americans may soon be facing nuclear weapons in the hands of terrorists.

At a time like this, we need the best qualified people at the top, whether they are Asian-American women, left-handed Hispanics or whatever.

Obama's win in Iowa signalled that many Americans seem to feel the same way. The Clintons' attempts to bring us back to bean counting is only the latest in a long series of their disservices to this country.