Thomas J. Farnan
|
Posted: Mar 03, 2018 12:01 AM
Share   Tweet
The opinions expressed by columnists are their own and do not necessarily represent the views of Townhall.com. 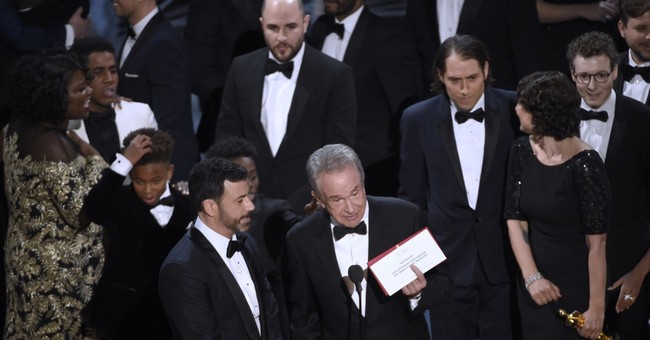 Last year, the 89th Academy Awards was to be an affirmation of American institutions, a night of speeches and sermons culminating in the selection of the Best Picture.  President Trump, and his associated rapscallions and usurpers, would give way once again to those who knew best.

Millions would watch as their moral betters projected superior political sensibilities to salve a national wound.  Their glamour and insight would be attractive alternatives to the crudities and chaos that had descended since Trump’s election.

All they had to do is what they had done for 88 years: correctly stuff the envelope and read the result.

It was fitting that the task fell to Warren Beatty.  He is so vain, he probably thought the award was about him. He hesitated.  In the great battle between improvisation and script, his face tightened.  Faye Dunaway snatched the envelope.  Bonnie to his Clyde, caught again in an ambush.

With the utterance of the words “La La Land” – you can’t make this stuff up – the once glorious Hollywood establishment proved hapless.  Not merely by its inability to compete with anything on Netflix, but by the failure to complete the evening’s dramatic arc by delivering the climactic line on cue.  The very thing, in other words, that filmmaking is supposed to do well.

It was a major screw up, coming as it did at the precise moment when establishments had suffered in the common man’s estimation for their failure to accomplish the ordinary.

It was ironic, too.  The Oscars were sponsored by the New York Times’ unprecedented marketing campaign that employed the catchy slogan, “The Truth Is Hard to Find.”

Picking up on the sponsor’s theme, Beatty’s words immediately before they bestowed the Best Picture award upon the wrong movie were: “Our goal in politics is the same as our goal in art, and that’s to get to the truth.”  Except when the truth is not in the envelope where you expect it to be.

With that, Hollywood hung itself on the gallows it had prepared for Trump.  And, in the process, accidentally vindicated Trump voters.

Trump was elected because the great institutions, whether government or religious or financial, and even the licensed professionals Pricewaterhouse Coopers employs to tally Oscar votes, have grown ossified and sclerotic when it comes to doing what they are supposed to do.

People were essentially saying that the Washington establishment is fired, and we’re sending a New York real estate mogul to fix it.  There was a similar sentiment on the Democratic side which, absent shenanigans by Hillary Clinton and the DNC, may have sent Bernie Sanders into the general election.

Voters saw Trump as a stubborn project manager, in Hollywood parlance a Goldwyn, a Mayer, a Zanuck.  Someone who would look up from his plate of eggs at the complaining director and say, “The kid stays in the picture.”  Someone whose insolence could be broken only by finding his favorite horse’s head severed and in his bed.

Someone who would put the right card in the right envelope.

Not that Hollywood will learn the lesson.  This year’s awards will once again be hosted by Jimmy Kimmel, whom the Washington Post has ordained “America’s Conscience.”  Yes, that guy.

Those in attendance will speak truth to power by talking about guns, hypocritically garnering applause while safely ensconced behind their wealth and armed bodyguards.  They will refuse to consider that the Parkland shooting is fundamentally about the failure of institutions.  You know, the very problem that got Trump elected in the first place.

The FBI missed dire warnings about the Parkland shooter like a star struck accountant tweeting his association with celebrity backstage.  Instead of creating strict policies and protocols to deal with threats of mass killing in the wake of 9-11, which was their job, the last two FBI directors have conjured a whole lot of ridiculousness about Russian interference.

It’s not only the FBI.  Police officers on the scene did not enter the building to stop the carnage.  Their Sheriff immediately went on TV to blame guns, without addressing the institutional failures of his own department.

There are credible reports that this shooter may have escaped criminal prosecution in the past by an invention of the Obama Administration called The Promise Program, a complete abdication of Broward County authorities at the behest of the federal government to burnish crime statistics.

If so, that is the greatest failure of American institutions yet.  Nikolas Cruz had a gun because laws on the books were purposely not being enforced.  You’re telling me the remedy here is more laws?

At last year’s Academy Awards, an accountant’s mistake rendered farcical Hollywood’s gigantic pose that it courageously embraces the truth, while the deplorables – all 62 million (and counting) of them – reside in a deliberate falsehood.

The people who voted for Trump see the same facts as the reigning cultural elite but favor different policies, as happens in democracies.  It is childish to the point of rude to commandeer the resources of popular culture to say political opponents are stupid or blind or both.

That’s not going to stop them this year, unfortunately.  Those in attendance will be accepting adulation as the best actors of our time even though it was learned this year that parts have been distributed in Hollywood based on a willingness to play along with systematic abuse.

Meaning, by principles of subtraction, that better actors may still be slinging hash in Ohio because they refused to play along, on principle.  Which, you would think, should stop self-righteous preening.  Don’t count on it.