I Toured an Immigration Detention Facility. Here’s What I Saw.

Terry Schilling
|
Posted: Dec 04, 2019 11:15 AM
Share   Tweet
The opinions expressed by columnists are their own and do not necessarily represent the views of Townhall.com. 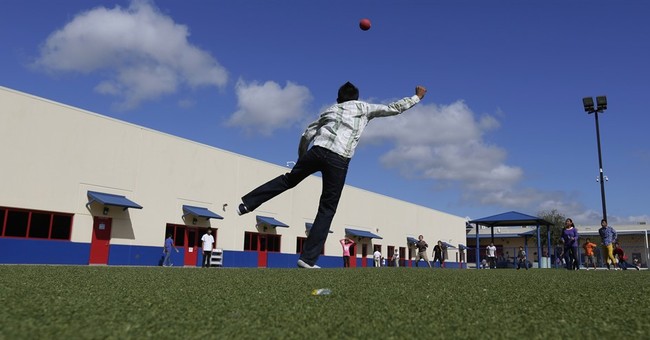 When my dad served in Congress, I had a couple of opportunities to tour state-run prisons. Both times I went in with the expectation that the nightmarish portrayal of prison life depicted in movies and on TV was surely an exaggeration. Instead, I sadly found that fiction mirrored reality — and frankly I was just relieved to get out of there without getting shanked or worse!

So when I began hearing about immigration detention facilities on the news, I imagined those same dreary places I visited, except worse, with barbed wire and chain-link fences locking crying and starving children in cages. After all, this is what we are told to believe — prominent Democrats have even compared these facilities to Nazi concentration camps.

However, I was greatly surprised when, upon recently visiting an immigration detention facility and private prison in Florida, I found the media and Hollywood-driven storylines about these places to be overwhelmingly false. Far from “concentration camp” conditions, both of these facilities placed an emphasis on respecting the human dignity of those incarcerated — providing them with adequate food, water, toiletries, and many other amenities. The experience gave me renewed hope that a just and humane solution can be found to the crisis in our immigration system.

My whirlwind day was spent at the Broward Transitional Center in Pompano Beach, Fla., and the South Bay Correctional and Rehabilitation Facility in South Bay, Fla. Both are managed by the GEO Group, a corrections firm that has had its share of negative headlines.

Nevertheless, what I experienced was very different than the typical media portrait. At the transitional center, instead of dark and dirty cages, I found bright, clean facilities with amenities such as a brand new soccer field with artificial turf. The atmosphere was relaxed, as detainees moved around freely, played sports in the yard, took books out of the library, and used the available iPads to call home or speak with their attorneys.

Similarly, at South Bay, I found an environment far better than the dangerous one I had previously encountered at state-run prisons. Instead of fear and distrust, a mutual respect seemed to exist between detainees and staff, whose main focus was rehabilitation rather than punishment. Most impressive was the educational opportunity available to detainees, who were able to access basic GED classes as well as advanced courses in subjects ranging from horticulture to commercial driving.

At the end of the day, I was dumbfounded — this was entirely different from what I had been led to expect by Democrats in Congress or by allegedly objective news outlets. However, perhaps I shouldn’t have been surprised.

For years, my job as executive director of the American Principles Project (APP) has involved work on the issue of immigration. APP is a rare organization in these polarized times: a pro-immigration group that also believes strongly in border security and law enforcement — a balanced view shared by many Americans across the political spectrum. This has unfortunately not been the case in Washington, however, where politicians and media elites — especially on the Left — derive more benefit from spreading misinformation and demagoguery than proposing actual solutions.

Thankfully, outside of D.C., things seem to be moving in a different direction. After all, if a privately run immigration detention facility and private prison can show such respect for those in their care, perhaps we can have an equally respectful debate as a nation over our broken immigration system. Perhaps we can put a stop to the gaslighting and the political posturing and finally address the serious problems which have been pushed off or ignored for too long.

At least one can hope.