The Age of Rage

Terry Paulson
|
Posted: May 16, 2022 12:01 AM
Share   Tweet
The opinions expressed by columnists are their own and do not necessarily represent the views of Townhall.com. 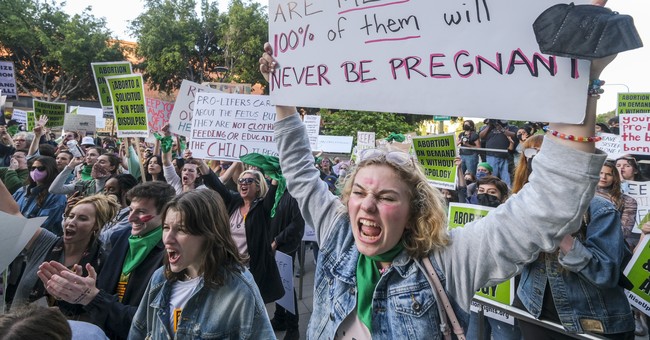 Many Republicans are seething in response to Biden's destructive agenda that has contributed to high inflation, ad exploding deficit, urban lawlessness, and an out-of-control Southern border. More and more Americans are eager to turn their anger into a November landslide against Democrats. They're tired of the rampant lawlessness, the irresponsible DAs unwilling to prosecute criminals, and the deficit spending that has unleashed inflation impacting the lives of every American.

The recent leak about the reversal of Roe v. Wade has given woke extremists all they need to justify angry, even violent, demonstrations. The decision is not even final, but liberals are marching on the homes of conservative Supreme Court Justices. Some justices have moved from their homes to ensure the safety of their families.

The lockdowns and restrictions tied to the COVID pandemic have certainly added to the anger of many citizens. People watch shows that reinforce their own views. Such one-sided journalism helps justify violent actions. But let's be clear. Viewers respond with high ratings from the steady stream of extremists. Rage is the "eye candy" that now attracts viewers. Yes, there are extreme views expressed on either side of our political divide, but the
vast majority of rage and violence is coming from the left.

Press Secretary Jen Psaki has complained about threats and personal attacks, but Republicans point out that the party has not publicly shared the addresses of any Biden administration official's home address.

After the leak of a potential Supreme Court reversal on Roe v. Wade, a pro-abortion protest in downtown Los Angeles turned into a violent clash with law enforcement after officers were called to disperse the increasingly
disruptive crowds, resulting in the injury of at least one officer. What started as a small protest outside the city's federal courthouse building, grew increasingly rowdy and disruptive. The protest grew despite promises from state officials and liberal lawmakers to codify the ability to access abortion in California.

A group called "Jane's Revenge" claimed to be behind the attack on the offices of Wisconsin Family Action.  The "warning" demanded that pro-life organizations disband in 30 days. They claimed, "We have run thin on patience for those who seek to strip us of what little autonomy we have left." The group claimed that it had groups "all over the U.S."

Columnist and pundit Victor Davis Hanson wrote, "Politics are resembling the violent last days of the Roman Republic. An illegal leak of a possible impending Supreme Court reversal of Roe v. Wade that would allow state
voters to set their own abortion laws has created a national hysteria. Never has a White House tacitly approved mobs of protesters showing up at Supreme Court justices' homes to rant and bully them into altering their votes."

Commenting on the angry demonstrations, Senate Minority Leader Mitch McConnel said it well, "It is an attempt to replace the rule of law with the rule of mobs." It's the mobs that get the coverage, and that coverage encourages more attacks.

The rage hasn't been limited to the abortion issue. In January, the leftist ShutDownDC group picketed outside Sen. Josh Hawley's (R-MO) home in Virginia. Hawley said at the time, "Tonight while I was in Missouri, Antifa
scumbags came to our place in DC and threatened my wife and newborn daughter, who can't travel. They screamed threats, vandalized, and tried to pound open our door. Let me be clear: My family, and I will not be
intimidated by leftwing violence."

We may have ushered in the age of rage, but the vast majority of Americans do not want it to continue. It's time we all demand an end to violence and stop legitimizing destructive demonstrations. The answer to hate speech is not violence or forced silence. The answer is more speech, more respectful, thoughtful, even passionate dialogue across our divide. Freedom and rights are only real when you extend and ensure those rights to those who openly disagree with you. Let freedom ring. Let's return to disagreeing without being quite so disagreeable. Rage may get you on the news, but it doesn't ensure the future of our republic. Demand more. Start being part of the answer by being responsible for your own actions.