Terry Paulson
|
Posted: Dec 07, 2020 12:01 AM
Share   Tweet
The opinions expressed by columnists are their own and do not necessarily represent the views of Townhall.com. 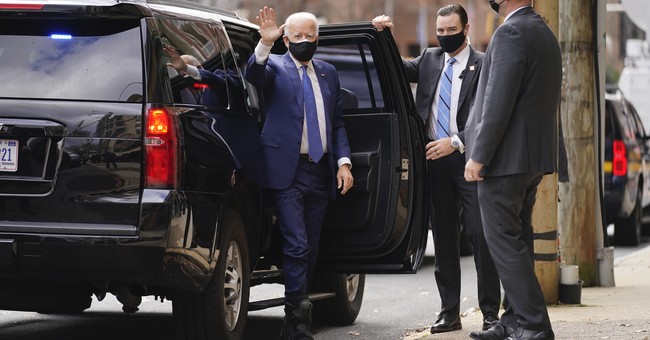 Joe Biden and his supporters will certainly be disappointed if the fraud investigations reverse the results of this election. But there are other disappointments ahead if he takes office. He’ll face the reality of his campaign promises and the high expectations of the many factions who worked to elect him. Unfortunately for him, his reliance on identity politics has a cost. Each of those vocal “identities” need to be fed from the federal trough to meet their divergent demands.

Will Rogers, telling truths with humor, observed, “Our foreign policy dealings are an open book—a checkbook.” With Biden in office, that checkbook is going to be open to fulfill expensive domestic and diplomatic promises. You can almost hear the cash register sounding—“Ka-ching, Ka-ching, Ka-ching.”

The Black Lives Matter crowd are coming with their laundry list and won’t take no for an answer. They want special treatment. They want reparations—"Ka-ching, Ka-ching, Ka-ching." But do payments extend to immigrant blacks who supported President Trump? What percentage black do you have to be to receive benefits and how do you verify it? If your black ancestors came after slavery or grew up in states that did not have slavery, do they receive benefits? If not, who is going to tell them “No?” How do you convince the rest of America to pay people who never were slaves and just claim that they were victimized by “white privilege?”

There’s Biden’s promise of free college education for all and forgiveness of student loan debt—“Ka-ching, Ka-ching, Ka-ching.” What would stop colleges from raising tuition since “free money” is coming soon! How long can you go to school and have government pay? Does government pay for all majors no matter how unlikely to contribute to a self-sustaining career? What about non-citizens—do they get free college education? How do you convince Americans who already paid dearly for their college education and just finished paying off their debt to pay more taxes so that others don’t have to?

Don’t worry about finding a good-paying job after college. Democrats what to give everybody a guaranteed monthly income whether they work or not. Will we never learn that “temporary free stuff” given by government is NEVER temporary? Such entitlements just keep growing—“Ka-ching, Ka-ching, Ka-ching.” I don’t think Biden or any other Democrat will be able to convince working Americans to give a big chunk of their hard-earned income to those who don’t work.

Now, don’t forget global warming! If John Kerry is chosen as America’s “Climate Czar,” the sky is the limit on the havoc to our economy—“Ka-ching, Ka-ching, Ka-ching.” They will rush to sign the Paris Climate Accord where environmentally conscious America pays big time for the reported “evil excesses of capitalism” while allowing China and India more time to pollute at our expense.

The socialist championing progressives led by AOC and Bernie Sanders are already upset by Biden’s projected cabinet appointments. They’re screaming betrayal! Will that give the rioters and looters all the excuse they need to justify taking to the streets again? Their destruction doesn’t come cheap—“Ka-ching, Ka-ching, Ka-ching.”

Big government is cheering! Voters in Washington, DC went Joe Biden by 92 percent. We know why. The deep state is tired of Trump’s cuts. The deep state wants to expand and grow way deeper. They want their high-paying government jobs secured. After all, with all the regulations Trump rescinded, Biden putting them back will require many government worker to administer them and punish non-compliance—“Ka-ching, Ka-ching, Ka-ching.”

Let’s not forget the blank check needed to take care of the outstretched hands from foreign countries starved for aid cut by President Trump. They want their foreign aid—“Ka-ching, Ka-ching, Ka-ching.” After all, being a “developing country” forever is forever profitable for the crooked ruling classes and keeps the average citizen trapped in aid and charity instead of free-enterprise growth.

Special investigators don’t come cheap and could be a distraction for the Biden administration. Many GOP leaders are calling on Trump to appoint a special prosecutor to look into a number of things—election fraud, the Obama-Biden’s Justice Department’s handling of Trump’s fake Russian conspiracy, and Joe Biden’s involvement in the Hunter Biden influence payments. That means more money for lawyers—“Ka-ching, Ka-ching, Ka-ching.”

By the way, with Republicans having a distinct possibility of holding onto Senate control and having a huge advantage in redistricting in the House, that means congressional support for Biden’s priorities may be seriously limited. With any luck, House Speaker Nancy Pelosi wilI be applying for unemployment in 2022.

Know that the Trump resistance is fired up for the midterms; they feel cheated whether or not they can prove that there was enough fraud to reverse the election result. Biden’s calls for unity are falling on deaf ears after four years of constant attacks and obstruction by Democrats against President Trump. Just remember that when any party goes too far, it just mobilizes the party out of power.

Yes, I almost feel bad for Joe Biden. Of course, Joe Biden knows how to handle the media and uncomfortable questions. I wonder if the White House has a basement that Biden can hide in until he is kicked out of office?