The Respect Due Our Soldiers Is Forever Unimpeachable

Terry Paulson
|
Posted: Jan 27, 2020 12:01 AM
Share   Tweet
The opinions expressed by columnists are their own and do not necessarily represent the views of Townhall.com. 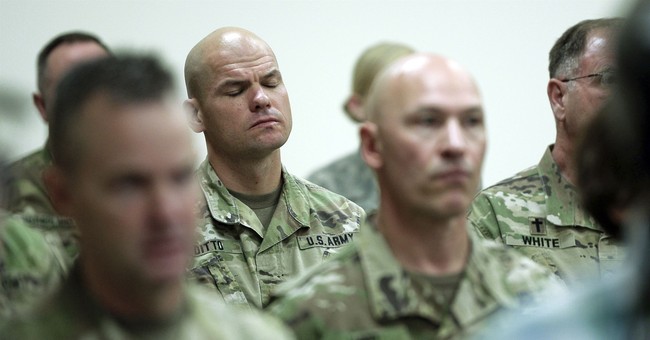 One thing that ought to be unimpeachable to all Americans is the value and respect due our soldiers and their families. They will always be needed, and the debt we owe them is great.

The world vacillates between the need to forcefully confront evil people and regimes that impinge on the rights of others and working to create a world that promotes and maintains peace without war. War is hell. War is sometimes necessary. Because the cost of war is so high, it should never be the first choice nor be taken lightly.

The play “Last Out – Elegy of a Green Beret,” written by Ret. Lt. Col. Scott Mann, lets you viscerally experience the reality of war for soldiers and their families through an innovative series of images, stories, and unsettling questions. The play is written, acted, and produced by veterans. It’s their story, told by them and acted by them. It strings together stories from many soldiers into a stirring “universal story of those who served in combat.”

The play centers around Sargent Danny Patton who was killed in combat in Afghanistan. Danny, killed early in the play, is faced with moving from the battleground to his final resting place for warriors, Valhalla. He finds peace by reliving and coming to grips with his own heroes journey through the help of others who have gone before him.

Is this show anti-war? That’s difficult yet easy to answer. Scott Mann confided, “No one hates war more than a warrior. Anyone who does not believe war is hell hasn’t seen enough of it.” But Bryan Bachman, one of the other three actors in the show, was quick to reply to the question about whether peace is possible. He confessed, “There will always be evil, bad people that need to be defeated.”  It’s anti-war to the extent that it should never be entered into lightly. Diplomatic efforts should always be encouraged first, and yet evil cannot be allowed to go unchecked.

Every year, 200,000 veterans transition from military service into civilian life. Storytelling can help the daunting challenge of coming home from war. As Scott Mann writes, “’Last Out’…is a story of love, honor, and letting go.” How do you let go? You don’t isolate yourself. You don’t remain silent bearing the burden of post-traumatic stress alone. You tell your story to people who will listen, to people who care enough to understand and still love you.

Founded by Scott and Monty Mann, The Heroes Journey, is a 501C3 helping veterans and their families find their own voice and tell their own hero’s journey. Telling their story helps them cope and become more resilient in their transition back to public life. You can support their efforts at www.theheroesjourney.org.

The audience full of veterans and family members found release in watching this painful but truthful story of Danny Patton and his wife Lynn. That’s why group therapy is often more helpful than individual counseling. In a group experience, you are confronted with the reassuring reality that “I am not alone!” Others have had to face this. They have talked about their experiences, have been supported, and come out the other side.

The production company ensures that that there is support for those attending. Doc Diego, licensed clinical psychologist Diego F. Hernandez, works with the team in handling post-traumatic stress issues that might surface. Doc Diego travels with the show and is there at the theater to talk with anyone who needs to take the first step in coping with their own transition.

“Last Out” is a powerful story for all to hear. Its purpose is three-fold. First, inform civilians on the cost of war. Second, validate the sacrifice and struggle of the warriors and their families, and finally, provide storytelling skills and training for veterans in transition. Whether you support their organization or not, may we never forget those who have paid so much to keep us free—our veterans and their families. We honor those who have died and those who have had to live with the cost of serving.

“Saving Private Ryan” and the current movie “1917” portray vividly the cost of war. The closing line from the lips of the dying Capt. John Miller to the saved Private Ryan rings true today as strongly as it did when first uttered, “James . . . earn this. Earn it.”

Soldiers pay a price. The families of soldiers pay a price, and we should never desensitize ourselves to that cost. We should all live worthy of the lives sacrificed by so many to ensure our freedom. May we keep earning that sacrifice!