The Iron Lady and the Titanium Man

Terry Paulson
|
Posted: Nov 04, 2019 12:01 AM
Share   Tweet
The opinions expressed by columnists are their own and do not necessarily represent the views of Townhall.com. 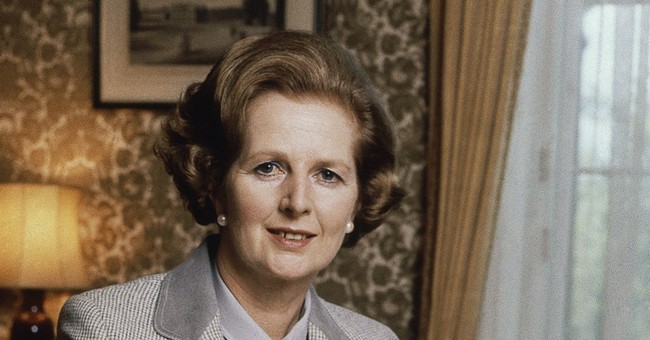 In my recent trip to Europe, I was forced to see American politics through a limited progressive lens. Having only one “American” channel, CNN International, I wonder how any European could appreciate what President Donald Trump has done except to deserve impeachment.

CNN seems sure of Trump’s well-deserved demise. Their glee over his perceived imminent impeachment and resulting election defeat is hard to hide. But like their early predictions of Hillary Clinton’s victory in 2016, they underestimate this President.

While visiting Grantham England, the birthplace of Margaret Thatcher, I was struck by a tribute to the prime minister’s early roots at the city museum. Thatcher, the Iron Lady, was born to entrepreneurial, Christian parents who helped nurture her rock-solid principles that would guide her through tough choices.

Purchasing her memoir, Margaret Thatcher; The Path to Power, provided my CNN antidote for the remainder of my European trip. Like Trump, she was called names and vilified in the progressive press. But her vision for her country’s future and her values provided a ready political compass. Her comments in the 70’s could be said today.

In a Daily Telegraph op-ed, she attacked those who thought she stood only for the rich: “If ‘middle-class values’ include the encouragement of variety and individual choice, the provision for fair incentives and rewards for skill and hard work, the maintenance of effective barriers against the excessive power of the state, and a belief in the wide distribution of individual private property, then they are certainly what I am trying to defend…. People believe too many Conservatives have become socialists already. Britain’s progress towards socialism has been an alternation of two steps forward and one step back…and why should anyone support a party that seems to have the courage of no convictions?”

In a passionate statement of her core political beliefs, she asserted: “I believe we should judge people on merit and not on background. I believe the person who is prepared to work hardest should get the greatest rewards and keep them after tax. That we should back the workers and not the shirkers: that it is not only permissible but praiseworthy to want to benefit your own family by your own efforts.”

Her memoirs helped me understand Trump’s appeal. If Thatcher was the Iron Lady, Trump is the Titanium Man. In my view, his actions reveal these rock-solid guiding principles:

We will find and kill terrorists who attack Americans. You cannot hide where we can’t find you.

Fight your own wars. We will no longer use our soldiers to be the world’s police. If American interests are not involved, fund your own defense. If you are going to be an ally, pull your own weight.

Provide a strong border and a legal immigration system that welcomes those committed to preserving the American Dream. We do not support illegal immigration. If you want to come to America, do it legally and wait your turn. If you’re already here illegally and commit a serious crime, you’ll be deported. If you return and commit a crime again, you’ll serve time.

Your American Dream and your self-sufficiency must be earned. We will reward productive work by letting you keep more of the money you earn. We will provide a hand up, not a perpetual hand out that creates dependency.

Winning friends in the media is not my goal. Fulfilling what I promised is. The media’s constant attacks are expected. If a President has to be liked by the media, they’re in control. Trump won’t change to win applause from progressive puppets.

If you choose to impeach him, be ready for a fight. Make your case for impeachment but know that Trump will defend his administration’s actions aggressively.

This President was elected as an outsider committed to changes that were long overdue. Trump was ready to lead with a business acumen few possess and a New York street fighter mentality that backs down from no one. After three years, the Democrats should know that, but in the coming months, they’re going to find out the hard way that this Titanium Man fights! Trump will not be forced from office, and he will win the November election.