Time to Focus on Solutions

Terry Paulson
|
Posted: Aug 12, 2019 12:01 AM
Share   Tweet
The opinions expressed by columnists are their own and do not necessarily represent the views of Townhall.com. 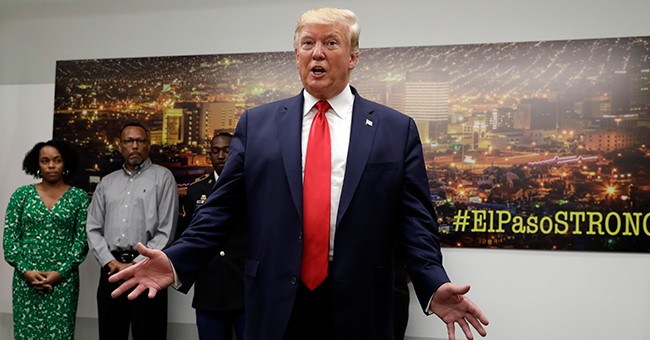 There are no sure solutions to mass attacks; one man with a weapon and motivated to kill is hard to stop. The rash of murders in El Paso, Dayton, Gilroy, and Chicago has delivered a wake-up call to a divided and angry America. There are no easy answers, but collectively searching for ways to make such attacks less likely is far more constructive than getting stuck in the current blame game!

It’s easy for politicians to get coverage by blaming President Trump’s supposed “racism” while ignoring their own hateful rhetoric. The president is no more responsible for the El Paso domestic terrorist than Bernie Sanders was responsible for his supporter who nearly killed Rep. Steve Scalise at a Republican baseball practice or Democratic presidential candidate Elizabeth Warren is responsible for her supporter unleashing carnage in Dayton. Whether fueled in part by environmental extremism or white nationalism, such views are just used to justify their hateful attacks.

President Trump has made it clear that improved background checks have to be a part of the plan. No one wants guns in “the hands of mentally unstable people or people with rage or hate.” He’s confident that Republicans and Democrats can find a bill they can pass.

The president has also pointed to the dark web on the internet as “a dangerous avenue to radicalize disturbed minds and perform demented acts.” The El Paso killer’s manifesto was posted on 8Chan. The site was also used by the Christchurch killer and the San Diego mass murderer. Responding to pressure, the founder of 8Chan has already taken down his site.

President Trump is also open to the controversial “Red Flag” laws, also known as Extreme Risk Protection Orders. When evidence of a real threat is provided, he wants to expedite due process to take firearms from “those judged to pose a risk to public safety.”

Acknowledging how mental health plays a role, the president supports reforming our mental health laws to better identify mentally disturbed individuals who may commit acts of violence and to help them get treatment or authorize involuntary confinement if necessary. In many states, therapists are already required to report individuals who specifically claim to do harm.

There are more ideas worth considering. We should support aggressive and expedited application of the death penalty for mass shooters. Quick justice is a warning to those considering attacks.

Most players of violent video games don’t kill anyone, but gaming companies should voluntarily tone down some of their more violent products that reward the number of kills. Parents should monitor and limit what youths play.

Media outlets should severely limit mentions of mass shooters' names and suppress images of their faces that gives them the fame they crave.

Target hardening is an obvious answer for schools, but it’s too costly and limiting for all public places.

Resist the temptation to establish “gun free zones” which marks such areas for easy targets for mass shooters. The Cielo Vista Mall and the Dayton eateries banned guns. Mass killers go to gun free zones where there is no one to return fire.

The Second Amendment guarantees the right to keep and bear arms. Let citizens who qualify carry weapons. In the 2017 Sutherland Springs shooting, Steven Williford used his automatic weapon to put two shots into the killer that day. If the killer had not been stopped, many more would have been murdered. It’s not the gun; it’s the people behind the gun that matter most.

Some politicians have “had enough about prayers,” but as Dostoevsky once observed, “If there is no God, everything is permissible.” In a nation filled with self-absorbed, isolated children and adults, there is a need for a religious revival.

Texas Lt. Governor Dan Patrick observed, “Everyone drops to their knees and prays after an event. Let’s start coming to God before the event so we don’t have to pray after the event. I will tell you after going to countless funerals, … I can tell you if it weren’t for their faith in God, these communities and these parents couldn’t get through. I don’t know how they do it without faith.”

President Trump said what all Americans should affirm and act on, "In one voice, our nation must condemn racism, bigotry and white supremacy. These sinister ideologies must be defeated. The best solution requires individual intervention and social responsibility. Hatred has no place in America. … I am open and ready to listen and discuss all ideas that will actually work and make a very big difference.” If you see something, it’s your job to say something. When people do, let’s each join in to do our part.