The Perfect Storm: A Gotcha Media and the Myth of the Perfect Candidate

Terry Paulson
|
Posted: Feb 22, 2016 12:01 AM
Share   Tweet
The opinions expressed by columnists are their own and do not necessarily represent the views of Townhall.com. 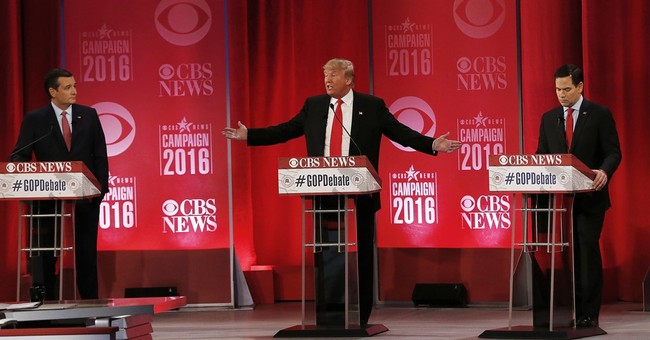 One has to wonder whether the current way we pick our president has evolved to the point that it no longer serves our republic or preserves our future. We’ve dumbed down our debates and news coverage and, as a result, keep citizens uninformed. As a result, we may get the president such deterioration warrants.

When Lincoln debated Douglas at that pivotal point in American history, they weren’t given three minutes to explain their position and 45 seconds to respond. They did a series of debates with a different issue in each city.

The candidates alternated who would present their position first. Each was given an hour to make their case, and the first candidate was given 30 minutes to rebut the second candidate’s response. Then it was off to the next city for a new issue. The newspapers fully covered their responses.

What’s the mainstream media’s response to today’s debates? Certainly, the entire transcript for debates are available online. But the majority of Americans are lucky to catch the evening news campaign coverage. They get 15-second clips of the candidates’ most provocative and divisive statements or their most glaring mistakes.

If all you see of “establishment” candidates is their worst moments and mistakes, it’s no wonder that our collective view of politicians is in the single digits! If you want reasons to “throw the bums out,” the media provides all the evidence you need. The constituents who’ve been helped, the laws they’ve passed that made a difference, and their informative speeches don’t make the headlines or the nightly news.

Marion Wilholm reported, “In a… study by George Washington University, the evening news was monitored for 100 nights. The research found 8,600 negative news items and only 370 positive news items…. The conclusion is that we are grossly over-informed about catastrophes we can do little or nothing about.”

Before ending his campaign, Gov. Chris Christie complained about the “robotic” statements by Sen. Marco Rubio in a GOP Debate. But how many times did you hear Christie remind voters that he was “the only candidate who had actually prosecuted…?” You can fill in the rest.

Every candidate repeats core messages at every speech or interview. Candidates want voters to remember the anchor statements that differentiate their campaigns. They want phrases that are remembered and repeated by their faithful.

Even more comical were the reporters’ “robotic questions” to Rubio about his “robotic messages.” The news anchors repeated the same ‘talking points” in their leads—Rubio’s performance could derail his march to the White House!

Talk about robotic! Once they’ve gotcha, the media won’t let go. After all, it’s not their job to inform, but to attract viewers. Advertisers want eyeballs to see their products and service. Disasters, car chases and politicians who fall short get those eyeballs every time.

Neil Postman, author of “We Are Amusing Ourselves to Death,” observed that Americans have a short attention span, a constant need to be entertained, and an inability to look at anything in depth. Obviously, enough said!

The only places that perfect candidates exist are in campaign promos. We all make misstatements. We all forget key words and can’t remember names. Our mothers, spouses, and children could easily add chapters to our book of sins. Candidates are no different. We just don’t have to see our shortfalls on the six o’clock news!

Can’t find a candidate that you can enthusiastically endorse? Maybe it’s because the view of ALL our candidates are so negatively slanted by the media that we never get to see what our candidates have to offer.

What’s the answer? Dig deeper. Go to candidate websites to find their positions that matter to you. Listen to some of their longer speeches to see what they emphasize. Look for endorsements from people you respect.

Even then, you won’t find the perfect candidate. A preacher once warned, “if you find a church where you like everything about it, you’ll have a church of one.” The same could be said about political parties and their candidates.

We are blessed to have people who care enough about this country to run the long campaign gauntlet. Let’s bring some realistic expectations to our party, and do our homework in finding candidates who have the skills, the values, and the positions that most match your views and who will serve our country and preserve our future.