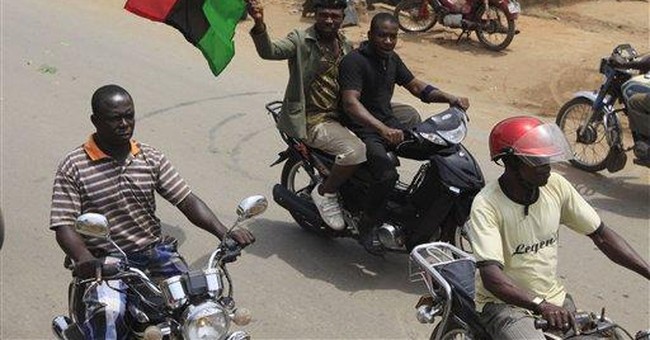 Pope Francis’s speech to the UN called for a coordinated international response to the plight of Christians in the Middle East and Africa: “Christians, together with other cultural or ethnic groups,… have been forced to witness the destruction of their places of worship, their cultural and religious heritage, their houses and property, and have faced the alternative either of fleeing or of paying for their adhesion to good and to peace by their own lives, or by enslavement.

“There are individual persons, our brothers and sisters, men and women, young and old, boys and girls who weep, suffer and die. Human beings who are easily discarded when our only response is to draw up lists of problems, strategies and disagreements.”

While conducting Good Friday services in April, Pope Francis prayed, "We see in you our persecuted brothers, beheaded and crucified because of their faith in you, before our eyes or often with our complicit silence. In this third world war, waged piecemeal,… a form of genocide is taking place…."

As he led services, al-Shabab gunmen attacked churches in Kenya massacring nearly 150 people, singling out Christians for point-blank executions. Yes, prayer and international responses are needed, but the “complicit silence” of the media on the blatant abuse of religious freedom by militant Muslims is irresponsible.

One such continuing abuse is the ongoing genocide of the people of Biafra in what is now southeastern Nigeria. Prior to the creation of Nigeria by Britain’s departure, Biafra was a prosperous indigenous people with over a thousand years of history and a rich connection to Judeo-Christian values and free enterprise capitalism. The yoking together of these proud Igbo people with their Muslim neighbors from the North was an invitation to conflict and abuse.

After Igbo citizens attempted to establish the Republic of Biafra in 1967, a holy jihad was proclaimed by Islamic extremists in the Nigerian army. With army support, the Nigerian government initiated an economic blockade and tried justifying starvation as a legitimate weapon of war. The result was the genocide of millions of Igbo citizens and the systematic elimination of a majority of Biafran elites and leaders.

On December 15, 1968, the American Jewish Congress issued a memorandum, “The Tragedy of Biafra,” stating, “For more than a year, a little noticed but nonetheless savage and tragic war has been going on between the Federal Government of Nigeria and the former Eastern Region of that country which, in May 1967, proclaimed its independence as the Republic of Biafra.”

This September, Justice Oscar Onyeani Umah sent an open letter to the International Court of Justice in the Hague, noted that the 1967 war drew little public attention despite being responsible “for more deaths than have occurred in Vietnam, Burundi, and Sudan. The thirty-month-long war led to the death of over six million ethnic Igbos and other Easterners.”

Sadly, the silence of the international media regarding the plight of Biafra continues to this day. Recent killings of harmless Baifrans on August 30th by a combinations of military and police remains just one of many attacks allowed under the leadership of Nigerian President Mohammed Buhari.

In response to such killings and calls for a referendum for the peaceful secession of Biafra, Justice Oscar Onyeani Umah, called on the United Nation, The International Court of Justice, The Russian Government, The American Government, and the world at large to stop the continuing genocide in Biafra.

Nnamdi Kanu, the leader of Biafra Restoration Movement and the director of Radio Biafra (http://radiobiafra.co/), recently received a warm reception at the World Igbo Congress (WIC) Annual Convention in Los Angeles. Nnamdi and his supporters would welcome a peaceful secession by diplomatic means, but, if necessary, are ready to take up arms to achieve independence for Biafra.

The efforts to silence Radio Biafra by the Mohammed Buhari administration has failed. Recent trend data indicates that Radio Biafra is number one in growing audiences worldwide, ahead of CNN. It’s time for the world’s media and international leaders to wake up to the plight of Christians in Biafra, demand an end to persecution, and to support efforts to establish the Republic of Biafra.