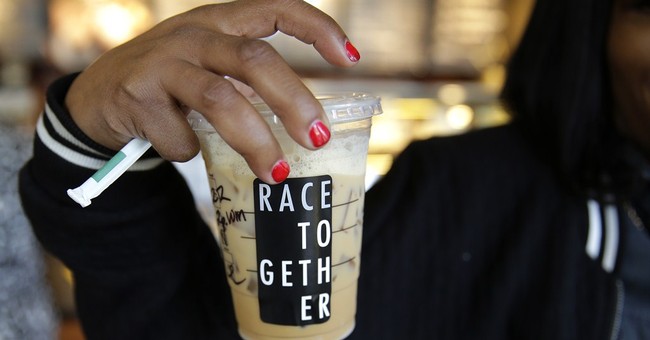 Little did the Starbucks barista know that in scribbling “Race Together” on the cup, he’d launch an important conversation. Wearing a Rams cap and shades, Darrel Wilson sat sipping his morning coffee alone, away from the angry barrage of stares and taunts. A black man across the room looked at his cup and then Wilson. A tear rolled down his face. You could sense a deep sadness as walked toward Wilson’s table. This conversation is fiction, but I wish it were true.

Darren: “Then you’d understand why I’d rather not talk….”

Darren: “Many were. I’ve got nothing to add.”

JD: “I do. I was one of the men who wrongly accused you.”

Darren: “Wait, yes, you were one of the men screaming at me.”

JD: “I was, and I lied to the grand jury. I didn’t see Michael Brown with his hands up. I saw him on the ground. I heard Dorian Johnson say his hands were up and that you killed him in cold blood.”

JD: “I believed Dorian. I didn’t want you to get away with it, so I lied. But what Dorian said happened, didn’t happen. I’m sorry. I know this has ruined your life, man. Every time I see anyone raise their hands in protest, it tears me up inside.”

JD: “It’s not over for me. The guilt. It’s like God put this message on my cup this morning and had you here waiting.”

Darren: “Thank you. Nobody has said they were sorry. No way did I want that young man to die. I just wanted him to stop. Look, I was scared. I think of other things I might have done, but I killed him. It was my job to arrest him, not shoot him!”

JD: “All the Justice Department reports, the grand jury. You did what you felt you had to do.”

Darren: “I learned later that 8% of officers killed are killed with their own guns. All I could think about was that I was almost shot with my own gun in my patrol car. He was so strong. When he left, I knew I had to go after him, but damn I was scared. My heart was pounding. Everything happened so fast. And then he was down. People screaming at me. Sirens blared.”

Darren: “Every time there’s a problem with a cop and a black man, Ferguson comes up. My name comes up. Demonstrators raise their hands. They keep perpetuating a lie. Sure there are a few bad cops and the Ferguson Police Department have changes they have to make, but most are good officers trying to keep streets safe. I know I was.”

Darren: “Took guts to come over here. Our chaplain told me that not forgiving is like taking a little bit of poison every day in hopes that the man you hate dies from it.”

Darren: “It’s always a feeding frenzy around anything to do with race. Many don’t want the facts. They made up their mind before they even knew the facts. They were into anarchy, not justice. As a cop, I was presumed guilty until proven innocent. Oh, man, I can feel that poison coming back…” Shaking his head and laughing, “You know, the media would never believe this conversation could happen. They certainly wouldn’t report it!”

JD: “God doesn’t care what the media reports. There’s hatred on both sides that could use God’s forgiveness and love”

Here’s to a world with a little less blaming, a lot more humble conversations across our divide, and more shared forgiveness and commitment to build a future we can proud of…no matter what our race.