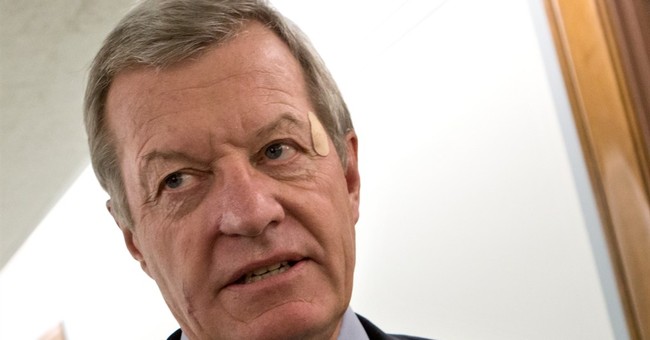 The magical spell that President Barack Obama has placed on Americans is unraveling. It's painfully evident that President Obama's words no longer match the self-evident facts. His rambling filibusters at press conferences invite more questions than provide needed clarity.

Because of the stream of broken promises--you can keep the healthcare  insurance you have, healthcare costs will go down, unemployment won't go above 8%, the national debt will be reduced in my first term, using chemical weapons is a "red line" that requires a stronger response--more and more Americans are losing trust in their president. Even once-supportive liberals are no longer enamored by his soaring but vacuous rhetoric.

After 35 years of service in Washington, Montana Democrat Max Baucus is leaving the Senate, but he's not going quietly. After helping to craft and pass Obamacare as chairman of that tax-writing panel, Baucus confessed in March that the health care law is "a huge train wreck coming down." The design and implementation of online insurance exchanges to serve 20 million  people across 34 states is terribly behind schedule and the cost is estimated to be $240 billion more than planned.

With companies cutting employees and work hours to avoid the crippling costs  of the new law, this "train wreck" is going to negatively impact the very  people Obamacare hoped to help! We're experiencing the truth in P. J.  O'Rourke's observation: "If you think health care is expensive now, wait  until you see what it costs when it's free."

The Washington Post, the paper whose Woodward and Bernstein story launched  Watergate, is not a bastion of conservative thought. Their fact-check columnist has already given Obama the dreaded Four Pinocchio rating for  untruthfulness for  "Obama's fanciful claim that Congress 'proposed' the sequester."

Even as he blamed Republicans for the sequester, a bipartisan Congress,  facing rage from their constituents, put an end to President Obama adminstration's politically motivated airport delays. This president talks  "non-partisan solutions" but lives "my way or the highway." Instead of working with Congress to find real savings in a bloated bureaucracy,  President Obama tried scoring political points by fueling a phony crisis.

Bloomberg News reported that there were more than enough air traffic controllers to operate without flight delays if furloughs were only used at overstaffed airports. Even the liberal leaning editorial board of Obama's  Hometown Chicago Tribune slammed the Obama administration for making "a  terrible miscalculation" by encouraging the FAA's "phony crisis." They added, "We'd guess that either ex-chief of staff would have told the president: Don't inconvenience people; try to blame someone else and think you'll do anything but lose."

If an Obamacare "train wreck" and a "phony" air traffic controller crisis aren't enough, he continues to raise taxes instead of taking spending cuts  seriously. After reaching a compromise with Republicans which allowed tax cuts for everyone making less than $400,000 and some spending cuts, President Obama now wants more taxes on the "rich."

With nearly 50% of all Americans paying no income taxes and the top 1%  already paying 30.2% of the load, it's no wonder that even the conservative-bating Bill Maher seems to have had enough. In a recent Friday  night tirade on his HBO show, he blasted, "Rich people - I'm sure you'd agree with this - actually do pay the freight in this country." After noting that California's wealthy carry the vast bulk of the tax burden in the state, he continued, "I just want to say liberals - you could actually lose me. It's outrageous what we're paying - over 50 percent. I'm willing to pay my share, but yeah, it's ridiculous."

Welcome to what conservatives have known since President Obama was elected--he's all hat and no cattle. Talk is cheap except when the president does it. His policies are as bankrupt as his budget. In spite of the liberal  media whitewash, our "emperor" has no clothes, but at least more now know it.