Terry Jeffrey
|
Posted: Apr 06, 2022 12:01 AM
Share   Tweet
The opinions expressed by columnists are their own and do not necessarily represent the views of Townhall.com. 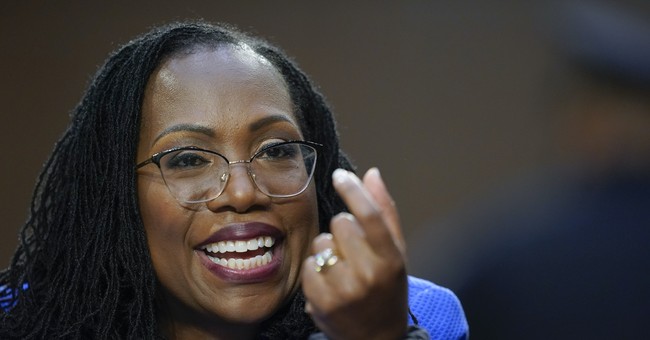 In a written response she presented to the Senate Judiciary Committee, Judge Ketanji Brown Jackson put herself at odds with a 2,000-year-old understanding of the nature of the law and the foundation of human rights.

A half-century before Christ was born, the Roman senator Cicero plainly explained the foundation of a just law.

"There is a true law, a right reason, conformable to nature, universal, unchangeable, eternal, whose commandments urge us to duty, and whose prohibitions restrain us from evil," he said.

"It is not one thing at Rome and another at Athens; one thing today and another tomorrow; but in all times and nations this universal law must for ever reign, eternal and imperishable," he said.

"It is the sovereign master and emperor of all beings," said this great Roman statesman. "God himself is its author, its promulgator, its enforcer. He who obeys it not, flies from himself, and does violence to the very nature of man."

Almost 1,900 years later, Thomas Jefferson, the primary author of the Declaration of Independence, sent a letter to Henry Lee, citing Cicero as one of the inspirations for that document.

"This was the object of the Declaration of Independence," Jefferson wrote Lee in 1825, "not to find out new principles, or new arguments, never before thought of, not merely to say things which had never been said before; but to place before mankind the common sense of the subject."

"All it's authority rests then on the harmonizing sentiments of the day," Jefferson said, "whether expressed in conversations, in letters, printed essays or in the elementary books of public right, as Aristotle, Cicero, Locke, Sidney, etc."

How exactly did the 18th-century American Declaration of Independence echo the pre-Christian declarations of Cicero? Both are based on the correct belief that, as Cicero put it, there "is a true law, a right reason, conformable to nature, universal, unchangeable, eternal" and that "God himself is its author, its promulgator, its enforcer."

In the Declaration, Jefferson invoked "the Laws of Nature and Nature's God" and noted that "all men" have "unalienable rights."

"We hold these truths to be self-evident, that all men are created equal, that they are endowed by their Creator with certain unalienable Rights, that among these are Life, Liberty and the pursuit of Happiness," says the Declaration.

Unfortunately, for much of its history, the United States violated this principle, first by allowing slavery to persist and then by allowing segregation.

In 1963, when he was unjustly locked in the Birmingham jail for peacefully protesting segregation, the Rev. Martin Luther King Jr. explained why segregation was an un-American system of unjust laws.

"One may well ask: 'How can you advocate breaking some laws and obeying others?'" King said. "The answer lies in the fact that there are two types of laws: just and unjust. I would be the first to advocate obeying just laws. One has not only a legal but a moral responsibility to obey just laws. Conversely, one has a moral responsibility to disobey unjust laws. I would agree with St. Augustine that 'an unjust law is no law at all.'

King then called for America to live up to the fundamental principles enshrined in the Declaration and the Constitution.

"One day the South will know that when these disinherited children of God sat down at lunch counters, they were in reality standing up for what is best in the American dream and for the most sacred values in our Judaeo Christian heritage," he said, "thereby bringing our nation back to those great wells of democracy which were dug deep by the founding fathers in their formulation of the Constitution and the Declaration of Independence."

The Founding Fathers, as noted, said in the Declaration that "all men are created equal" and "endowed by their Creator with certain unalienable Rights" including "Life, Liberty and the pursuit of Happiness."

A set of written questions that Republican Sen. Ted Cruz of Texas (for whom this writer's daughter works) submitted to Jackson during her confirmation hearings asked the following: "Please explain, in your own words, the theory prevalent among members of the Founding Fathers' generation that humans possess natural rights that are inherent or inalienable."

Jackson responded: "The theory that humans possess inherent or inalienable rights is reflected in the Declaration of Independence, which states: 'We hold these truths to be self-evident, that all men are created equal, that they are endowed by their Creator with certain unalienable Rights, that among these are Life, Liberty, and the pursuit of Happiness."

The very next written question asked Jackson: "Do you hold a position on whether individuals possess natural rights, yes or no?"

Jackson responded: "I do not hold a position on whether individuals possess natural rights."

So, she does not agree with the foundational principal of the Declaration of Independence?

Cicero, the Founding Fathers and King clearly had a different view.