They Failed to Coerce Americans Out of Their Cars

Terry Jeffrey
|
Posted: May 12, 2021 12:01 AM
Share   Tweet
The opinions expressed by columnists are their own and do not necessarily represent the views of Townhall.com. 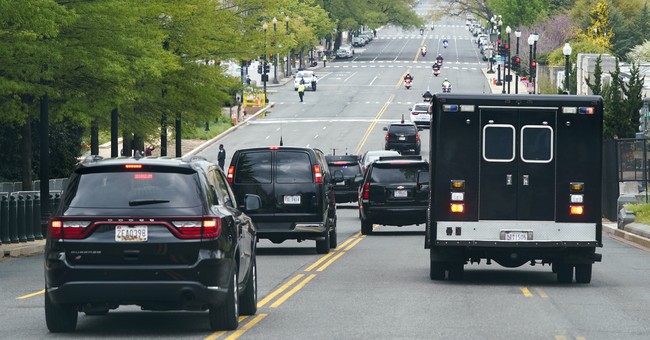 Commuting by subway -- or some other form of public transportation -- and commuting by car epitomize two dramatically different lifestyles in the United States.

In the former, for example, an American might live in a high-rise building in a densely populated urban area. He rides an elevator to the street each morning and then descends via an escalator to an underground chamber, where he stands on a concrete slab until a crowded train comes along.

When he boards that train, he is likely to stand, holding the metal rail above his head to make sure he does not fall when the train lurches forward.

He hopes the coughing, sneezing person standing next to him does not have a communicable disease -- but doubts it.

In a hypothetical example of the latter lifestyle, an American might walk through the door of her single-family home into a two-car garage. She gets into her four-door sedan, pushes a button to open the garage door, starts the car, turns on the air-conditioning and backs into her driveway.

She then heads down to the street, passing through a bright green lawn shaded by a massive oak.

She now turns the dashboard stereo to her favorite music.

That same morning, some other Americans would be heading to work via bus, bicycle, cab, carpool, ferryboat or even their own two feet.

So, which commute would you choose?

A recent Census Bureau report indicates the vast majority of American workers have made the same choice: They drive -- by themselves -- in their own cars.

That means that 84.8% commuted in a private vehicle, either alone or in a carpool.

Nor was the use of public transportation evenly distributed across the country.

Shortly after President Barack Obama took office, as this writer pointed out in a 2010 book ("Control Freaks"), he indicated his desire to have Americans reduce their use of automobiles.

"I would like for us to invest in mass transit, because potentially that's energy-efficient," Obama said at a 2009 town hall in Fort Myers, Florida.

"The days where we're just building sprawl forever, those days are over," he said.

Then-Transportation Secretary Ray LaHood -- a former Republican congressman -- suggested taxing Americans for every mile they drove. But even the Obama White House rejected that idea.

Obama's Transportation Department then launched what it called the "Livable Communities Initiative."

The AARP Bulletin asked LaHood in October 2009 to "describe" what a livable community was.

"It's a community where if people don't want an automobile, they don't have to have one," LaHood explained. "A community where you can walk to work, your doctor's appointment, pharmacy or grocery store. Or you could take light rail, a bus or ride a bike."

On May 21, 2009, LaHood spoke about this plan at the National Press Club. "Some in the highway supporters and motorists groups have been concerned by your livability initiative," the moderator asked him. "Is this an effort to make driving more torturous and to coerce people out of their cars?"

"It is a way to coerce people out of their cars, yeah," LaHood responded.

The moderator followed up: "Speaking of, some conservative groups are wary of the livable communities program saying it's an example of government intrusion into people's lives. How do you respond?"

"About everything we do around here is government intrusion in people's lives," said LaHood.

A decade later, according to the Census Bureau report, most Americans were still driving their cars to work.

There is one word that explains why they insist on doing so: freedom.