An American Hero Then -- and Forever

Terry Jeffrey
|
Posted: Dec 30, 2020 12:01 AM
Share   Tweet
The opinions expressed by columnists are their own and do not necessarily represent the views of Townhall.com. 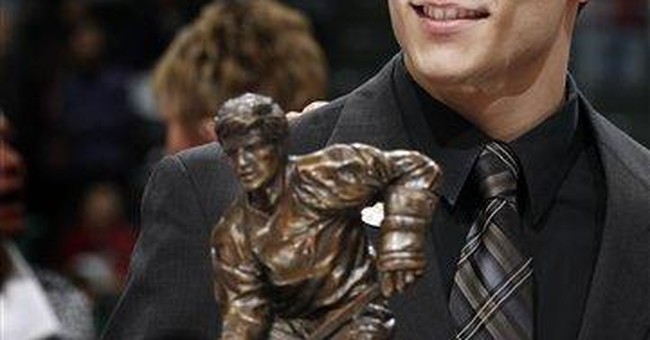 The Great War had been over nine days when Hobey Baker took off in his Spad airplane to explore some of the territory the Allies had seized back from the Germans.

"On the way home my engine suddenly went dead and I had to land on the side of a hill only ten kilometers from Metz," he wrote in a letter to his father. "Had my engine stopped the same way any time during my work over the lines when the war was on I would have been a prisoner."

Hobey was one of the first pilots America sent to France in 1917. While there, he regularly wrote to his father, who then lived in Princeton, where both father and son had attended college.

Hobey's letters home in 1918 -- preserved by the Princeton University Library -- tended to focus on four things: the German planes he hoped to shoot down; his romance with Mimi Scott; his desire to get home as soon as possible after the war; and the mechanical problems suffered by the French planes he flew.

He had made an emergency landing that spring.

"I wish I could smash this machine of mine and get a new one," he wrote his father on May 18. "I am sick of having it always being repaired."

"I learned something about bringing a S.P.A.D. down with a dead motor," he said. "They are very heavy and lose height remarkably fast."

Before enlisting, Hobey was a famous athlete. As noted by his biographer Emil R. Salvini, "He is the only player to be enshrined in both the College Football Hall of Fame and the Hockey Hall of Fame."

"His name was known throughout the United States," a New York paper reported in 1918. "Naturally, the people who have been used to get a thrill when Hobey ran around the end or bucked a line in a football game or skated like the wind over the smooth surface of a hockey rink, received the same thrill when word came from France that 'Hobey had got a Hun.'"

Hobey was, in fact, credited with downing three German planes in combat.

While in France, he also became reacquainted with Jeanne Marie "Mimi" Scott, a wealthy New York debutante, who trained as a nurse and cared for wounded Allied soldiers in a hospital near the German lines.

She "was the most paragraphed and most widely photographed young woman in American society," said one newspaper report.

Hobey occasionally met with her in or near Paris in the spring and summer of 1918.

"We stopped at Paris and had three wonderful days there," he wrote his friend Percy Pyne on July 9. "Mimi Scott was in town and I saw her all the time. We really had a perfect time together."

As August turned to September, he went to meet her again.

"Well, it is all fixed and we are engaged," Hobey wrote of that trip. "Don't quite understand how I put it across, but I did and she is so much what I have always wanted that I feel all sort of safe and happy. She is a very decided sort of a person with lots of brains, not beautiful, but oh, I don't know, just so sweet and big and real."

But in mid-October, Hobey sent an entirely different message to his father.

"I think she is in love with some man in Paris," Hobey said. The engagement ended.

In a subsequent letter, Hobey expressed his earnest desire to return to America -- alive.

French Gen. Ferdinand Foch, he wrote his father on Nov. 8, had given Germany "seventy-two hours to accept the armistice terms, and I hate the idea of flying during those seventy-two hours. It would certainly be tough luck to get bumped off now."

Just before Christmas, he got orders to go home.

Lt. Edward C. Olds, a fellow Princeton grad, wrote a letter to the Princeton Alumni Weekly describing what happened then.

"Only yesterday morning, about eleven o'clock, he was here in my office as I dictated the order relieving him from the Second Army Air Service," wrote Olds. "He was to have left last night on the nine o'clock train for Paris on his way home.

"He was delighted with the prospect of returning and left the office radiantly happy," Olds said.

But then Hobey drove back to the airfield "to take a final short trip in his old Spad."

"However, as luck or fate would have it, there was a ship in his hangar belonging to one of his officers, Lieutenant Foster, the engine of which had gone bad a few days ago," said Olds. "It had been repaired, and Captain Baker, with his typical conscientiousness, decided to use his last trip to test out the repaired machine instead of using his own. Both officers and mechanics strongly urged him not to do so, but he insisted. He took off, made a short turn to the right, and was up only 150 metres over the field when the engine failed."

Hobey, Olds wrote, "tried to get back into the field, nosed down to get headway, started into a vrille and crashed, being almost instantly killed."

One report suggested Hobey's death might have been linked to his failed engagement with Mimi Scott. "But most unhappily," wrote biographer John Davies, "a newspaperman in Paris wrote a garbled account of their engagement and hinted at suicide, adding a fillip of suspicion for the sensation-minded."

Ten years later, F. Scott Fitzgerald wrote in "The Last of the Belles" about an Army pilot named Horace Canby, who unsuccessfully courted Ailie Calhoun: "He told her that if she married Knowles he was going to climb up six thousand feet in his aeroplane, shut off the motor and let go."

Fitzgerald's fictional Canby did die when his plane crashed.

But in the final days of the real Hobey Baker -- after Mimi Scott broke their engagement -- he did not threaten to die. He expressed his will to live and go home.

"I wish I had some influence so I could be relieved of this command and get home," he wrote his father on the day of the armistice.

"It was mean work flying on the lines those last few days," he wrote Percy Pyne on Nov. 16, "for we knew it would be over soon and hated the idea of being killed right at the finish."