Has Nadler Consigned Himself 'To The Condemnation Of History'?

Terry Jeffrey
|
Posted: Jan 22, 2020 12:01 AM
Share   Tweet
The opinions expressed by columnists are their own and do not necessarily represent the views of Townhall.com. 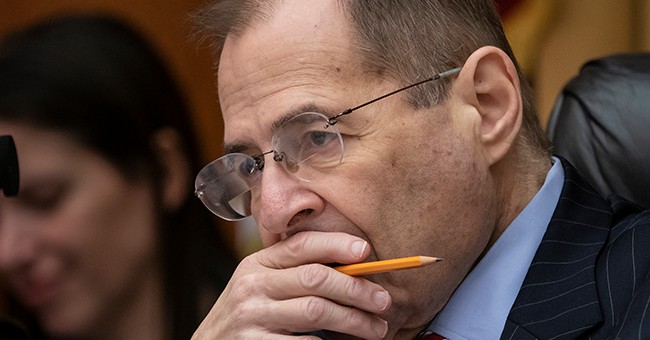 Or that is what Nadler claimed in 1998, when he was a dissenting minority member on a Judiciary Committee that approved four articles of impeachment against President Bill Clinton.

The full House voted to approve two of the four articles against Clinton -- with five Democrats voting for each of the approved articles.

"The Committee concluded that, on August 17, 1998, the President provided perjurious, false, and misleading testimony to a Federal grand jury concerning the nature and details of his relationship with a subordinate government employee," said part of the committee's summary of that article.

The other article the House approved alleged Clinton obstructed justice.

The committee cited seven different ways it concluded Clinton had done this. The first it summarized as follows: "The Committee concluded that on or about December 17, 1997, William Jefferson Clinton corruptly encouraged a witness in a Federal civil rights action brought against him to execute a sworn affidavit in that proceeding that he knew to be perjurious, false and misleading."

Nadler said he did not believe the committee had proven these charges -- but that, even if true, they were not impeachable.

"The conduct alleged -- even if proven -- does not rise to the level of an impeachable offense," he said in the committee's Dec. 10, 1998 hearing.

"We should not dignify these articles of impeachment by sending them to the full House," he said. "To do so would be an affront to the Constitution and would consign this committee to the condemnation of history for generations to come."

"There must never be a narrowly voted impeachment or an impeachment substantially supported by one of our major political parties and largely opposed by the other," Nadler said in that 1998 hearing.

That night, Nadler appeared on CNN's "Crossfire" -- where he argued a president could commit "serious crimes" but not merit impeachment.

"Now, I can understand where you say you don't think it's proven," host Pat Buchanan said to Nadler. "I don't understand how you sit there and say it's not serious."

"Oh, I didn't say it's not serious," said Nadler. "I said it's not impeachable. It's a different question. If those charges are proven, they are crimes. They are serious crimes and the president is subject to prosecution -- to indictment and prosecution."

Three days before that, Nadler said on CNN it would be wrong for the House to impeach Clinton if members believed the Senate would not remove him.

"It is almost a crime against the country to vote -- for the House to impeach the president, if they are morally certain that the Senate would not convict," Nadler said.

Nadler made an issue of this point in a hearing that day.

He asked Sean Wilentz, a Princeton history professor, to comment on "the propriety of voting for impeachment if you think (of it), as a punishment in and of itself, and if you think the Senate will probably not convict on the evidence you have?"

"There has never been a case where a House of Representatives has decided to move on (an) impeachment proceeding with the idea that the Senate would not convict," Wilentz said in part of his answer.

Nadler also argued that Republicans seeking impeachment were attempting to nullify an election -- "absent the fundamental threat to our democratic form of government that would justify" such an act.

"Members of Congress have no power, indeed they have no rights, to arrogate to themselves the power to nullify an election absent such a compelling threat," he said.

Last month, Jonathan Turley, a professor at the George Washington University School of Law, explained to Nadler's committee why Clinton's impeachment was correct.

Turley stated that an impeachment could be "based on a non-criminal allegation of abuse of power," but rebutted the argument that the crimes alleged against Clinton were not impeachable -- even if proved.

"There was not a debate over whether Clinton lied under oath," Turley said in written testimony. "Indeed, a federal court later confirmed that Clinton had committed perjury even though he was never charged. Rather, the issue was whether some felonies do not 'rise to the level of impeachment' and, in that case, the alleged perjury and lying to federal investigators concerning an affair with White House intern, Monica Lewinsky.

"My position in the Clinton impeachment hearing was simple and remains unchanged," Turley said. "Perjury is an impeachable offense. Period."

Now Nadler will try to convince a Republican-controlled Senate that a Republican president should be removed even though the articles of impeachment against him allege no crime -- and won not a single Republican vote in the House.

Will this consign Nadler -- to use his own terms -- "to the condemnation of history"?