Terry Jeffrey
|
Posted: May 22, 2019 12:01 AM
Share   Tweet
The opinions expressed by columnists are their own and do not necessarily represent the views of Townhall.com. 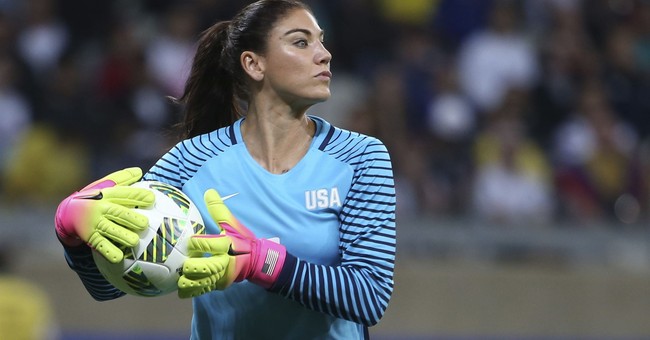 But English Gardner edged her out, running 10.74.

A month later, at the Rio Olympics, Bowie won the bronze in the 200-meter dash, the silver in the 100-meter race dash, and -- running with her USA teammates -- the gold in the 4x100-meter relay.

All these races -- in the Olympics and Olympic trials -- featured women competing against women.

Even though she was one of the fastest women in the world, Bowie would not have won competing with males.

Doriane Lambelet Coleman, who as a student at Cornell in the 1980s was the U.S. National Collegiate Indoor Champion in the women's 800-meter race, is now a law professor at Duke. Together with her colleague, Wickliffe Shreve, she has explained why Bowie would not win the male competition.

"If you know sport, you know this beyond a reasonable doubt: there is an average 10-12 percent performance gap between elite males and elite females," Coleman and Shreve wrote in an analysis published online.

"The gap is smaller between elite females and non-elite males, but it's still insurmountable and that's ultimately what matters," they wrote.

"Translating these statistics into real world results," they wrote, "we see, for example, that: Just in the single year 2017, Olympic, World and U.S. Champion Tori Bowie's 100 meters lifetime best of 10.78 was beaten 15,000 times by men and boys. (Yes, that's the right number of zeros.)"

This brings us to Washington, D.C., where the legality of all-female athletic competition is now a matter of legislative debate.

Democratic House Judiciary Chairman Jerrold Nadler of New York has described the so-called Equality Act as a bill that "amends the Civil Rights Act of 1964 and other core civil rights statutes to explicitly prohibit discrimination on the basis of sexual orientation and gender identity."

In the Judiciary Committee report on the bill, published this month, dissenting Republicans quoted Coleman's analysis at length.

"The new legislation would amend the 1964 Civil Rights Act by redefining 'sex' to include 'gender identity,'" Republican Rep. Greg Steube of Florida explained in a House floor speech last week.

"Without an exception, the definition would apply to all amendments to the 1964 act, including Title IX," he said. "Most schools, colleges, the NCAA, and the Olympic Committee would be affected because they receive federal funds and operate in interstate commerce."

"For example," he said, "a sports team couldn't treat a transgender woman differently from a woman who is not transgender on the grounds that the former is male-bodied. Yet the reality is that putting male- and female-bodied athletes together is co-ed or open sport. And in open sport, females lose."

"Requiring that biological females face competition from biological males will mean the end of women's sports in any meaningful sense," Steube said.

In the Judiciary Committee, Steube had made a straightforward effort to stop the Equality Act from effectively banning women's sports. He offered an amendment that said: "Nothing in this act may be construed to require a biological female to face competition from a biological male in any sporting event."

The committee rejected Steube's amendment. No Democrat voted for it. No Republican voted against it.

When the Equality Act came up on the House floor last Friday, Steube tried again to amend it to protect women's sports.

This time his motion would have added language to the bill that said: "Nothing in this Act or any amendment made by this Act may be construed to diminish any protection under Title IX of the Education Amendments of 1972."

Title IX says: "No person in the United States shall, on the basis of sex, be excluded from participation in, be denied the benefits of, or be subjected to discrimination under any education program or activity receiving federal financial assistance."

The House rejected Steube's proposal 181 to 228. One Democrat voted for it, and one Republican voted against it.

The champions of this bill do not deny that it would allow biological males to compete in women's sports.

Democratic Rep. Katie Hill of California took to the House floor to specifically champion this cause.

"State schools and athletic organizations across the country have found for many years that letting LGBTQ student athletes, including girls and women who are transgender, participate in sports does not harm women's and girls' sports in any way," she said.

"As an athlete, athletic success is based on so many factors, like individual ability and strength, and those abilities vary widely for people who aren't even trans," she said. "It has nothing to do with whether someone is transgender or not."

This bill will not pass the Republican Senate.

But it is another indicator of how the American left's radical agenda forces it to deny objective facts. To justify their abortion agenda, they have long needed to argue that some human beings are not human beings.

To justify their transgender agenda, they now argue that not all boys are boys.