Terry Jeffrey
|
Posted: Oct 03, 2018 8:15 PM
Share   Tweet
The opinions expressed by columnists are their own and do not necessarily represent the views of Townhall.com. 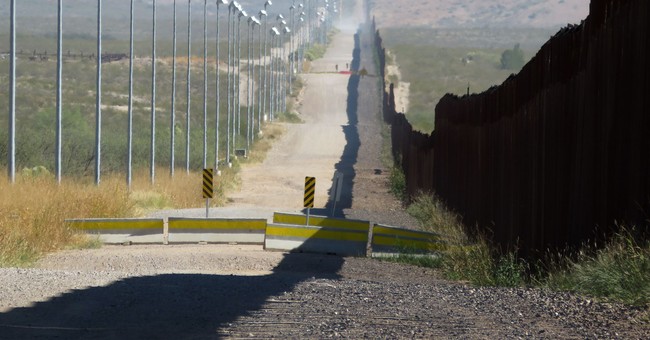 "But I say to Congress, I will never sign another bill like this again," said President Donald Trump. "I'm not going to do it again."

That was at a March 23 press conference after Trump had signed a $1.3 trillion continuing resolution that would fund the government through the remainder of fiscal 2018, which ended this past Sunday.

One of the things that angered Trump about that $1.3 trillion bill was that it only provided $1.6 billion for work on the border wall he had made one of his signature campaign promises. Trump had been seeking a long-term commitment of $25 billion.

Flash-forward six months to Sept. 15. Now Trump expressed his dismay in a tweet, not a press conference.

"When will Republican leadership learn that they are being played like a fiddle by the Democrats on Border Security and Building the Wall?" Trump said.

"Without Borders, we don't have a country," he said. "With Open Borders, which the Democrats want, we have nothing but crime!

"Finish the Wall!" he declared.

What inspired this presidential declaration?

A House-Senate conference committee had just finalized another massive spending bill. They called this one a combined "minibus" and "continuing resolution."

Unlike the "omnibus" Trump had signed in March, this minibus-continuing resolution did not fund the entire government in one bill. The "minibus" part of it, however, did "marry" the spending bill for the Department of Defense to the spending bill for the Departments of Labor, Education and Health and Human Services. It would fund those departments through all of fiscal 2019.

The "continuing resolution" part of it would fund only until Dec. 7 -- and, according to the House Appropriations Committee, only at "current levels" -- any other federal departments that did not have their own appropriations bills signed into law by Sunday, when fiscal 2018 ended.

In other words, those departments would be funded until one month after the upcoming midterm elections.

The Department of Homeland Security -- which is responsible for the border wall -- was one of these.

During the year, the House Appropriations Committee had approved a Homeland Security bill that provided $5 billion for the wall for fiscal 2019. The Senate committee had approved only $1.6 billion, making no increase from the 2018 level. And the massive minibus-continuing resolution would presumably maintain fiscal 2018's funding level -- but only through Dec. 7.

On Sept. 20, Trump tweeted about the bill again. This time, he put some of his words in capital letters.

"I want to know, where is the money for Border Security and the WALL in this ridiculous Spending Bill," he said, "and where will it come from after the Midterms? Dems are obstructing Law Enforcement and Border Security. REPUBLICANS MUST FINALLY GET TOUGH!"

Six days after this tweet, the Republican leadership brought their minibus-continuing resolution up for a vote in the House. It passed with 185 Democrats voting for it but only 176 Republicans. House Minority Leader Nancy Pelosi, D-Calif., joined House Majority Leader Kevin McCarthy, R.-Calif., in voting for it, while 56 House conservatives voted against it.

Funding for the border wall was not the only significant issue in this bill.

The original Labor-HHS-Education spending bill that the House Appropriations Committee approved in July included language that defunded both Planned Parenthood and research that uses tissue taken from babies killed in induced abortions. But that language was not included in the final minibus-continuing resolution that funded HHS for all of fiscal 2019.

On Friday, Trump signed into law the bill he had correctly called "ridiculous."

"This spending package reflects the compromise Republican leaders sought with the White House that postpones a fight over Trump's demand for a border wall until after the Nov. 6 midterm elections," the Washington Post reported that day.

If the Democrats win control of the House in November, Trump will have lost any chance he had of building the border wall he promised his supporters. If the Republicans hold the House and the Senate, Trump will need to decide whether he is going to follow them on border security or they are going to follow him.