Can the US Fix Afghanistan?

Terry Jeffrey
|
Posted: May 17, 2017 12:01 AM
Share   Tweet
The opinions expressed by columnists are their own and do not necessarily represent the views of Townhall.com. 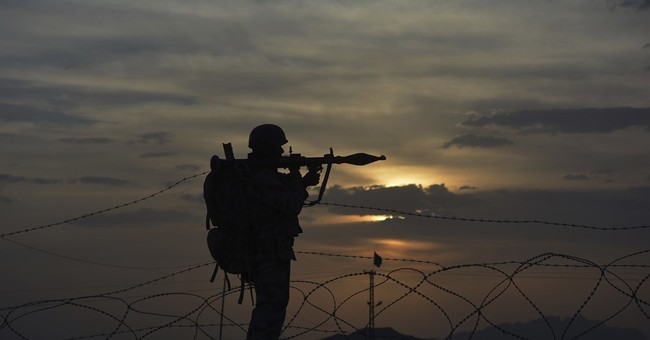 Trending
Three days after the 9/11 attacks both houses of Congress voted correctly -- and without objectors -- to authorize the president to use force against those who perpetrated the attacks and those who aided them.

Al-Qaida leader Osama bin Laden had been living in Afghanistan, where the radical Islamist Taliban regime gave him sanctuary.

The U.S. sought to end that regime, capture or kill bin Laden and other al-Qaida terrorists, and prevent Afghan territory from being used to harbor and train terrorists who could attack the United States in the future.

"We are committed to freedom in Afghanistan, in Iraq and in a peaceful Palestine," Bush said on May 1, 2003.

"The advance of freedom is the surest strategy to undermine the appeal of terror in the world," he said. "Where freedom takes hold, hatred gives way to hope. When freedom takes hold, men and women turn to the peaceful pursuit of a better life. American values, and American interests, lead in the same direction. We stand for human liberty."

When Barack Obama was elected president in 2008, the U.S. still had about 32,500 troops in Afghanistan, according to the Congressional Research Service. By the second quarter of fiscal 2011, Obama had increased those forces to 99,800. In the fourth quarter of fiscal 2016, as he prepared to leave office, there were still 9,800 there.

But have we eliminated the threat al-Qaida, and those who share its ideology, pose to the United States?

The most recent inspector general's report on the U.S. military mission in Afghanistan indicates the Taliban and al-Qaida are still active there and the Islamic State has established a presence.

"Insurgent attacks continued across Afghanistan this quarter with the Taliban remaining the greatest threat to the Afghan government," said the report.

'U.S. counterterrorism operations this quarter disrupted al Qaida's ability to attack the U.S. and Afghan forces by reducing its numbers to under 100 fighters and killing 3 of its top leaders," said the report. "However, al Qaida in Afghanistan remained affiliated with the world-wide al Qaida organization and, according to (U.S. commander) General Nicholson, 'these groups together have the intent and capability to conduct attacks outside Afghanistan.'"

And how is freedom doing in Afghanistan?

The Worldwide Threat Assessment that Director of National Intelligence Dan Coats presented to the Senate intelligence committee last week did not paint an optimistic picture for Afghanistan.

"The overall situation in Afghanistan will very likely continue to deteriorate, even if international support is sustained," said the threat assessment. "Endemic state weaknesses, the government's political fragility, deficiencies of the Afghan National Security Forces, Taliban persistence, and regional interference will remain key impediments to improvement."

"The fighting will also continue to threaten US personnel, allies, and partners, particularly in Kabul and urban population centers," said the assessment. "ISIS's Khorasan branch -- which constitutes ISIS's most significant presence in South Asia -- will probably remain a low-level developing threat to Afghan stability as well as to US and Western interests in the region in 2017."

The same threat assessment pointed to a terror threat to the "homeland" that is now "homegrown."

"US-based homegrown violent extremists (HVEs) will remain the most frequent and unpredictable Sunni violent extremist threat to the U.S. homeland," said the assessment. "They will be spurred on by terrorist groups' public calls to carry out attacks in the West. The threat of HVE attacks will persist, and some attacks will probably occur with little or no warning."

"In addition to the HVE threat, a small number of foreign-based Sunni violent extremist groups will also pose a threat to the U.S. homeland and continue publishing multilingual propaganda that calls for attacks against US and Western interests in the US homeland and abroad," it said.

The ultimate strategic aim of the United States in responding to the terrorist threat exemplified by al-Qaida and the Islamic State should not focus on establishing freedom in Afghanistan or any other distant land but rather on maintaining the God-given rights of life, liberty and property here.

Key to that is preventing terrorists from entering this country and depriving us of those rights here.

In the coming months, Republicans in Congress working with a Republican in the White House will have the opportunity to take concrete acts to secure our border and more aggressively vet those we let legally cross it.

If they want to keep America secure and free, they need to do it.