Nine Things the GOP Congress Must Do

Terry Jeffrey
|
Posted: Dec 28, 2016 12:01 AM
Share   Tweet
The opinions expressed by columnists are their own and do not necessarily represent the views of Townhall.com. 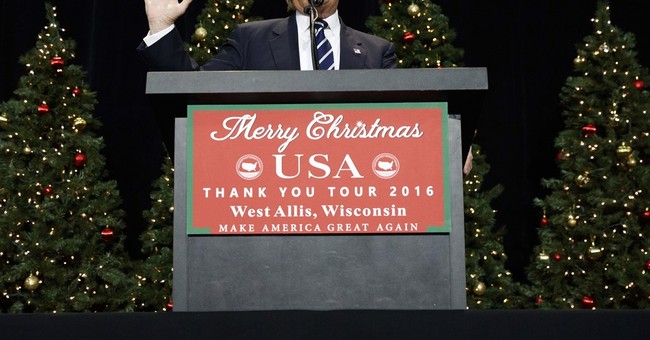 Donald Trump can be a great president.

But for that to happen, two things must occur: He must follow through on key campaign commitments, and the Republican Congress must act on them.

Here are nine commitments Trump made that the incoming Congress should make happen:

It further stated that reforms put in place after the repeal should "follow free market principles that will restore economic freedom and certainty to everyone in this country."

"The freedoms we cherish and the constitutional values and principles our country was founded on are in jeopardy," Trump stated in September. "The responsibility is greater than ever to protect and uphold these freedoms and I will appoint justices, who, like Justice Scalia, will protect our liberty with the highest regard for the Constitution."

In a letter to pro-life leaders, Trump added: "I am committed to ... (n)ominating pro-life justices to the U.S. Supreme Court."

The Senate should confirm only nominees who fit the model Trump advocated.

3. Build the wall and enforce the immigration laws.

In his immigration plan, Trump promised to: "Begin working on an impenetrable physical wall on the southern border, on Day One."

"All immigration laws will be enforced -- we will triple the number of ICE agents," said the plan. "Anyone who enters the U.S. illegally is subject to deportation."

Congress should enact all legislation needed to build Trump's wall and fully enforce the immigration laws.

"I am committed to ... (s)igning into law the Pain-Capable Unborn Child Protection Act, which would end painful late-term abortions nationwide," Trump said in his letter to pro-life leaders.

Congress should place that bill on Trump's desk by Jan. 27, the day of the 2017 March for Life.

"The Trump Plan will collapse the current seven tax brackets to three brackets," says Trump's tax plan. It would cut the top rate from 39.6 percent to 33 percent.

Additionally, Trump's plan would "repeal the death tax," which can be a confiscatory tax on family owned businesses. It also drops the corporate tax rate from 35 percent to 15 percent.

A great Congress would go further than Trump's plan. It would enact the "Fair Tax Act" that would eliminate the income tax, replace it with a sales tax and set the stage for repeal of the 16th Amendment, which made direct federal taxation of individual incomes plausible.

But enacting Trump's plan to cut tax rates and abolish the death tax is a good start to reining in federal tax collections.

In 2015, the U.S. had a merchandise trade deficit of $745.66 billion, according to the Census Bureau. Since 1979, according to the Bureau of Labor Statistics, the nation has lost more than 7 million manufacturing jobs.

The Senate should ratify better trade deals when they are negotiated.

Trump's foreign policy plan says he will end "the current strategy of nation-building and regime change." Congress should support this, including by reasserting its constitutional authority over the use of military force. That means the president may not use force -- except to repel a sudden attack on the United States -- unless Congress authorizes it.

Sean Hannity asked Trump on Fox News on June 17, 2015: "Would you insist on a balanced budget as president?" Trump responded: "I would insist on it relatively soon."

When President Barack Obama took office, the federal debt was about 10.6 trillion. Now it is about $19.9 trillion.

Alabama Five Guys workers refuse to serve cops. Now they don’t have to serve anyone
Hotair
The Drafting of the Indictment Against Roger Stone Shows The Duplicity Of Mueller’s Special Counsel Prosecutors
Redstate