Will Anti-ISIS Strategy Backfire at an Open Border?

Terry Jeffrey
|
Posted: Dec 14, 2016 12:01 AM
Share   Tweet
The opinions expressed by columnists are their own and do not necessarily represent the views of Townhall.com. 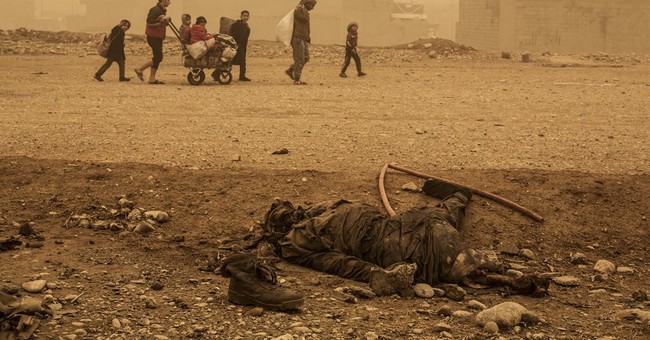 In combatting the Islamic State, has the current administration pursued a strategy that increases or decreases the terrorist threat to people in the United States?

The U.S.-led military campaign against "ISIL" in Iraq and Syria began in August 2014.

"First, we will conduct a systematic campaign of airstrikes against these terrorists," Obama explained in a Sept. 10, 2014 speech.

A report the next day in The Washington Post quoted a CIA spokesman: "CIA assesses the Islamic State of Iraq and the Levant (ISIL) can muster between 20,000 and 31,500 fighters across Iraq and Syria, based on a new review of all-source intelligence reports from May to August, an increase from our previous assessment of at least 10,000 fighters."

Brett McGurk, the president's special envoy for the coalition, said this Tuesday: "The number of battle-ready fighters inside Iraq and Syria is now at its lowest point that it has ever been. We estimate about 12,000 to 15,000."

The Department of Defense, meanwhile, has made some public estimates of the number of ISIL fighters killed by the coalition in Iraq and Syria.

Lt. Gen. Sean MacFarland, who commanded the coalition campaign from September 2015 to August 2016, gave a press briefing on Aug. 10 of this year.

"And although it's not a measure of success and it's difficult to confirm, we estimate that over the past eleven months we've killed about 25,000 enemy fighters," McFarland said. "When you add that to the 20,000 estimated killed prior to our arrival, that's 45,000 enemy taken off the battlefield."

In response to a follow-up question about the number of ISIL fighters killed, McFarland sounded a note of caution.

"Yes, and you know the thing about these numbers is they are pretty soft, pretty squishy," he said. "It's why we don't typically quote them a lot."

"The U.S.-led coalition has killed an estimated 50,000 Islamic State fighters since President Barack Obama first ordered military action against the group in August 2014, according to a senior military official," the Voice of America reported. "The official, speaking on condition of anonymity, told reporters the number was considered a 'conservative estimate.'"

In sum: The CIA estimated there was a maximum of 31,500 ISIL fighters in Iraq and Syria at the beginning of the campaign in 2014. DOD estimated last week the coalition had killed 50,000. The White House said this week there might be as many as 15,000 left in Iraq and Syria.

Obviously, the number and location of ISIL fighters is not static.

So, back to the question: Has the current administration followed a strategy that increases or decreases the terrorist threat to people inside the United States?

"(T)he group's foreign branches and global networks can help preserve its capacity for terrorism regardless of events in Iraq and Syria," CIA Director John Brennan told the Senate intelligence committee in June. "In fact, as the pressure mounts on ISIL, we judge that it will intensify its global terror campaign to maintain its dominance of the global terrorism agenda."

"ISIL has a large cadre of Western fighters who could potentially serve as operatives for attacks in the West," Brennan said. "And the group is probably exploring a variety of means for infiltrating operatives into the West, including refugee flows, smuggling routes, and legitimate methods of travel."

"There will be a terrorist diaspora sometime in the next two to five years like we've never seen before," Comey said.

"Because when ISIL is reduced to an insurgency and those killers flow out, they will try to come to Western Europe and try to come here to kill innocent people," he said. "We have to keep our eye on it and be ready for it."

Special Envoy McGurk made yet another similar point at his White House briefing.

He summarized the last message top ISIL propagandist Abu Mohammad al-Adnani delivered to would-be jihadists before he was killed in August: "If you can't come (to the caliphate) -- because you can't, because it's hard to get in here now -- stay home, pick up a knife, and attack someone down the street."

McGurk also argued that the flow of foreign fighters into Iraq and Syria, which he estimated had been "almost 40,000," had been curtailed by better border security -- over there.

"That's really thanks again to our efforts on the ground and our special operators have done an incredible job to clear out that area of the border just south of Turkey," he said, "and now the intervention from Turkey to protect its border -- to make sure that these terrorists cannot get in and out."

But the ultimate question is not: How many Islamic State fighters are killed over there or stopped as they enter Syria? It is: How many do we let in here?