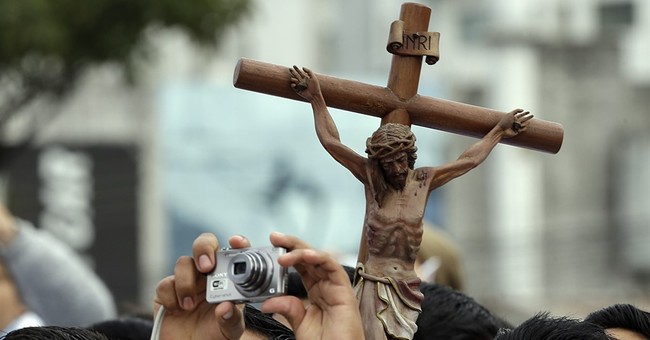 Trending
The woefully misnamed American Civil Liberties Union is launching a crusade to force Catholic hospitals to act against Catholic moral teachings and the natural law.

This is an un-American attack on religious liberty.

The ACLU's intentions came to light this week after it threatened to sue Mercy Medical Center in Redding, California, which is operated by the Sisters of Mercy. The hospital is a part of Dignity Health, a nonprofit that operates 40 hospitals -- 22 of which are Catholic -- in California, Nevada and Arizona.

As reported by the San Francisco Chronicle on Monday, Elizabeth Gill, an ACLU lawyer, sent a letter to the hospital threatening legal action if it would not relent on its refusal to allow a woman to be sterilized in its facilities after giving birth there to a child due next month.

"In an Aug. 17 letter to Mercy Medical Center in Redding, Gill said the ACLU would go to court unless the hospital reversed course and authorized the sterilization procedure," the Chronicle reported. "By denying 'pregnancy-related care'..., Gill wrote, the hospital is discriminating on the basis of sex, as defined by California law, and is also allowing 'your corporate entity's religious beliefs' to override a doctor's medical decision, violating a state law against the corporate practice of medicine."

On Tuesday, the Chronicle published another article with this lead: "Facing a possible sex-discrimination lawsuit, a Catholic hospital in Redding reversed its position Monday and agreed to let a woman's doctor sterilize her after she gives birth next month."

Dignity Health's Mercy Medical Center then issued a carefully worded statement indicating that the center, in fact, had not and would not turn away from the Catholic bishops' moral directives on health care.

"In accordance with policy, as well as state and federal law, we respect our patients' privacy by not discussing the specifics of their care," said Dignity's statement.

"What we can share is that in general, it is our practice not to provide sterilization services at Dignity Health's Catholic facilities in accordance with the Ethical and Religious Directives for Catholic Health Care Services," said the statement. "As such, tubal ligations are not performed in Catholic hospitals except on a case-by-case basis where a formal review by a committee of physicians and others gives permission to perform the procedure."

"The hospital has always and will continue to operate in accordance with the Ethical and Religious Directives for Catholic Health Care Services and medical staff bylaws," Dignity insisted in its statement.

The Ethical and Religious Directives for Catholic Health Care Services, published by the U.S. Conference of Catholic Bishops, say this about sterilization: "Direct sterilization of either men or women, whether permanent or temporary, is not permitted in a Catholic hospital. Procedures that induce sterility are permitted when their direct effect is the cure or alleviation of a present and serious pathology and a simpler treatment is not available."

The U.S. Conference of Catholic Bishops has posted a collection of quotations from church documents on contraception, sterilization and abortion. It includes a statement from Pope Pius XII explaining that "direct sterilization" is a violation of the natural law.

"Direct sterilization -- that is, the sterilization which aims, either as a means or as an end in itself, to render child-bearing impossible -- is a grave violation of the moral law and therefore unlawful," said the pope.

"[W]hen sterilization began to be much more widely used the Holy See was obliged to declare openly and explicitly that direct sterilization, permanent or temporary, whether of men or women, is illicit in virtue of the natural law, from which the Church herself, as you know, has no power to dispense."

"While we are grateful Mercy Medical Center has agreed to provide medical care in this instance ... the reality remains that there is a clear conflict between the best interests of patients and the directives of the Catholic hospital system," said the ACLU's Gill in an ACLU press release.

"Religious institutions that provide services to the general public should not be allowed to hold religion as an excuse to discriminate or deny important health care," she said.

In fact, Directive 70 published by the bishops says: "Catholic health care organizations are not permitted to engage in immediate material cooperation in actions that are intrinsically immoral, such as abortion, euthanasia, assisted suicide, and direct sterilization."

We now live in a country where self-proclaimed advocates of "civil liberties" believe they can get the courts to force Catholic institutions to cooperate in these evil acts.