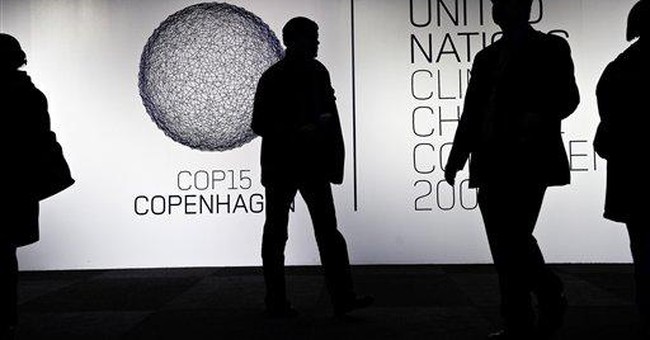 The Obama administration has a habit of waiting until late on Friday to release news it believes to be unpopular. Such was the case last Friday when White House spokesman Robert Gibbs put out a statement announcing that President Barack Obama was changing the date of his visit to the United Nations Climate Conference in Copenhagen from Dec. 9 to Dec. 18 -- when a deal on a climate-change treaty is more likely to be announced -- and that the president is now promising to hand out billions in new foreign aid.

Gibbs said Obama decided on the new foreign aid program after discussing it with the leaders of Australia, Germany, France and Britain.

"This week, the president discussed the status of the negotiations with Prime Minister Rudd, Chancellor Merkel, President Sarkozy and Prime Minister Brown, and concluded that there appears to be an emerging consensus that a core element of the Copenhagen accord should be to mobilize $10 billion a year by 2012 to support adaptation and mitigation in developing countries, particularly the most vulnerable and least developed countries that could be destabilized by the impacts of climate change," said Gibbs. "The United States will pay its fair share of that amount, and other countries will make substantial commitments as well."

Gibbs also said this $10 billion per year in new foreign aid of which the U.S. would pay a share was only the beginning of what the administration hoped would be a new and permanent stream for channeling U.S. tax dollars overseas.

"In Copenhagen, we also need to address the need for financing in the longer term to support adaptation and mitigation in developing countries," Gibbs stated. "Providing this assistance is not only a humanitarian imperative -- it's an investment in our common security, as no climate change accord can succeed if it does not help all countries reduce their emissions."

Before announcing this new foreign aid plan, the White House had revealed that Obama would tell the climate conference that by 2020 the United States would cap its carbon emissions at 17 percent below 2005 levels.

Why would Obama vow to impose carbon caps on U.S. industries -- a move certain to drive some industries overseas and kill manufacturing jobs here -- when the United States is just emerging from a deep recession and still faces a 10 percent unemployment rate, and when Obama himself is trying to persuade Americans his policies will create jobs?

The answer might be found in the vision of global wealth redistribution that has been advocated by Obama's top science adviser, John P. Holdren.

In 1973, Holdren co-wrote a book -- "Human Ecology: Problems and Solutions" -- with Anne H. Ehrlich and Paul R. Ehrlich, author of the 1968 bestseller "The Population Bomb."

The book called for "de-development" of the United States and global redistribution of wealth.

"A massive campaign must be launched to restore a high-quality environment in North America and to de-develop the United States," Holdren and the Ehrlichs wrote on page 279 of the book. "De-development means bringing our economic system (especially patterns of consumption) into line with the realities of ecology and the global resource situation. Resources and energy must be diverted from frivolous and wasteful uses in overdeveloped countries to filling the genuine needs of underdeveloped countries."

"Redistribution of wealth both within and among nations is absolutely essential, if a decent life is to be provided for every human being," Holdren and the Ehrlichs wrote.

In 1995, Holdren argued for "a world of zero net physical growth" in an essay titled "The Meaning of Sustainability: Biogeophysical Aspects" that he co-authored with Paul Ehrlich and Gretchen C. Daily. The essay was published in a book compiled by the World Bank.

"We know for certain, for example, that: No form of material growth (including population growth) other than asymptotic growth is sustainable," Holdren, Ehrlich and the Daily wrote.

"This is enough to say quite a lot about what needs to be faced up to eventually (a world of zero net physical growth), what should be done now (change unsustainable practices, reduce excessive material consumption, slow down population growth) and what the penalty will be for postponing attention to population limitation (lower well-being per person)," they wrote.

The essay included a table titled "Requirements for Sustainable Improvements in Well-Being." One of these requirements was: "Reduced disparities within and between countries." The "rationale" for doing this, the authors wrote, was, "The large gaps between rich and poor that characterize income distribution within and between countries today are incompatible with social stability and with cooperative approaches to achieving environmental sustainability."

Is it at all surprising that a president who would hire the author of these words as his top science adviser would pursue policies that will give U.S. manufacturers an incentive to relocate to developing nations and that will take tax dollars from American workers and give them to the governments of those nations?

For Obama's science adviser, Obama's trip to Copenhagen must be a dream come true.

Biden Reminds Gun Owners the Government Has Nuclear Weapons
Townhall
'People would AVOID HER': Brian Stelter's newscaster wife accused of workplace bullying and OMG-LOL that explains so much
Twitchy
Biden Threatens to Nuke Americans but Manages to Blow Up a Big Democrat Narrative Instead
Redstate
The Morning Briefing: We Can't Let the Psycho Marxist Democrats Win the Critical Race Theory Fight
PJ Media