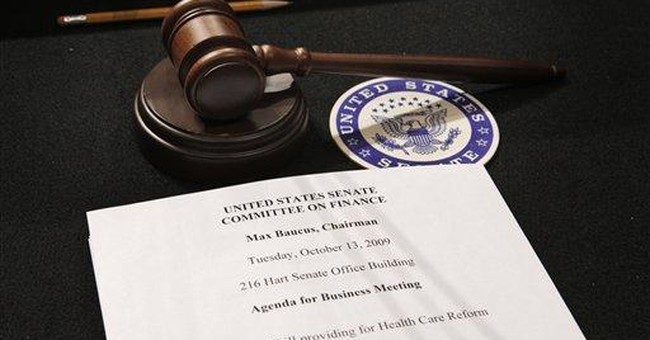 The most revelatory passage in the so-called "plain English" version of the health care bill that the Senate Finance Committee approved on Tuesday (without ever drafting the actual legislative language) says that in the future Americans will be offered the convenience of getting their health insurance at the Department of Motor Vehicles.

This is no joke. If this bill becomes law, it will be the duty of the U.S. secretary of health and human services or the state governments overseeing federally mandated health-insurance exchanges to ensure that you can get your health insurance at the DMV.

You will also be able to get it at Social Security offices, hospitals, schools and "other offices" the government will name later.

Page 19 of the committee's "plain English" text says: "The Secretary and/or states would do the following: ... Enable customers to enroll in health care plans in local hospitals, schools, Departments of Motor Vehicles, local Social Security offices, and other offices designated by the state."

This is the bill's most revelatory passage because it sublimely symbolizes the bill's true aim: a government takeover of the health care system.

What will the DMV and health care have in common if this bill is enacted? Government will control both.

But the omission is almost meaningless.

The public option is only one lane on the road to socialized medicine. Government subsidies and government regulations are two others -- and they run like a super highway through the Finance Committee bill.

The government will not pay this subsidy to the individuals purchasing insurance. The U.S. Treasury will pay it directly to the government-approved insurance providers.

"The Treasury would pay the premium credit amount to the insurance plan in which the individual is enrolled," says the committee's "plain English" text.

Four different levels of insurance plans will be available in the exchange -- Bronze, Silver, Gold and Platinum. But every year, the secretary of health and human services will determine what services need to be offered by these government-approved and government-funded plans.

"The Secretary of HHS," says the "plain English" text, "would be required to define and update the categories of covered treatments, items and services within the benefit classes no less than annually through a transparent and public process that allows for public input, including a public comment period."

The government would enforce this mandate with a fine. "The consequence for not maintaining insurance would be an excise tax of $750 per adult in the household," says the text.

The bill does not similarly order businesses to provide employees with health insurance. However, people who get insurance through their employer will not be eligible for the federal subsidies.

Even though this fee will not be tax deductible, it will be far cheaper for a business to pay the government $400 per worker than to pay a private insurance company thousands per worker for an insurance plan.

The Finance Committee has created an irresistible incentive for American businesses to drop their workers off at the DMV where they can enroll in government-funded, government-approved, government-regulated health insurance plans.