Not a Death Panel, a Death Mandate 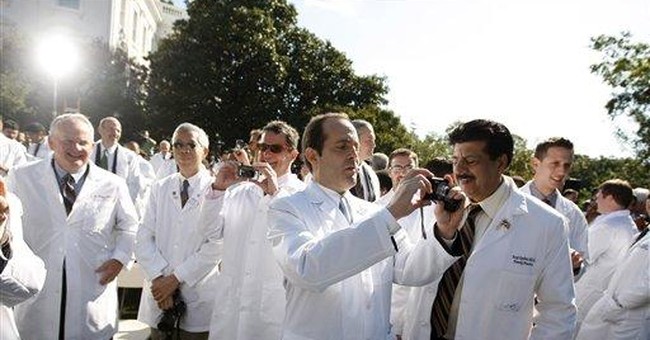 In a government-run or government-funded health care system that guarantees access to abortion, there must be people in government responsible for making sure unborn babies get killed.

In fact, the health care bill that the Senate Finance Committee finished amending last week specifically assigns just such a duty to the secretary of health and human services.

The government would not pay the credit to the individual but would pay it instead directly to the government-approved insurance plan.

Here's where the government's need to have an official who is complicit in abortions comes in.

Page 33 of the summary of the bill posted on the Senate Finance Committee's Website carries the subheading: "Rules Regarding Coverage of and Tax Credits for Specified Services." Under this subheading it says: "The Secretary would ensure that in each state exchange, at least one plan provides coverage of abortions beyond those for which Federal funds appropriated for the Department of Health and Human Services are permitted."

The bill requires the secretary to make certain every state has an insurance plan that people can buy with money paid directly out of the U.S. Treasury that covers abortion on demand.

Another provision in the bill says people who buy abortion-providing insurance plans in the exchange must pay an additional premium of at least $1 to theoretically fund the abortion part of their coverage. This provision was designed to allow pro-abortion senators to ignore the fact that money is fungible and claim that the bill they are supporting does not use federal funds for abortion -- when it fact it does.

But the death mandate on the secretary of health and human services is unambiguous. Whoever that person is must "ensure that in each state exchange, at least one plan provides coverage of abortions."

The summary does not explain how the secretary will do this -- although it does say that abortion cannot be mandated as a minimum benefit that insurance plans must offer to participate in the exchanges.

If the insurance plans in a particular state decide they do not want to cover the killing of unborn babies, the HHS secretary will presumably have to come up with some means for recruiting an insurer into that state that is ready and willing to cover abortions.

But whatever means the secretary settles on for carrying out the bill's death mandate, the fact is that if this bill is enacted, every future American health and human services secretary will be required by law to make sure that people can secure abortions through a government-approved insurance plan that receives revenue straight out of the U.S. Treasury.

If this bill passes, conscientious people who refuse to cooperate in the killing of innocent unborn children will never be able to serve in the office that sits at the pinnacle of our nation's new government-funded health-care system.

That office will be reserved for people willing to recruit into the government-subsidized health care system insurance companies that are willing to take money to take human lives.