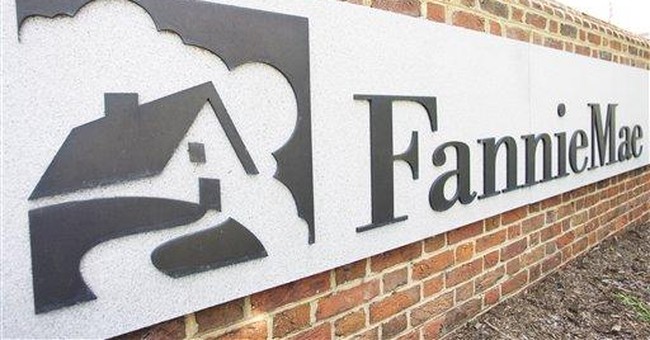 Look over old news reports about Fannie Mae and Freddie Mac, and you will repeatedly read that these two corporations were believed to carry an "implicit guarantee" from Uncle Sam.

That would apparently make them distinct from Social Security and Medicare, which most Americans assume carry an explicit guarantee from Uncle Sam.

"Though Fannie Mae and Freddie Mac say the federal government doesn't guarantee them against failing, Wall Street generally interprets the two companies' congressional charter -- and the $2.25 billion line to the Treasury each has -- as an implicit guarantee by taxpayers," The Washington Post reported in 1999, for example.

Now, the Bush administration has proposed a Fannie Mae and Freddie Mac bailout that will convert this "implicit guarantee" to an explicit one, putting taxpayers potentially on the hook for unknown billions. Even before this bailout, Fannie Mae and Freddie Mac enjoyed special benefits from the taxpayers. In addition to their lines of credit at the U.S. Treasury, for example, they were also exempt from state and federal taxes.

The proposed bailout will give the federal government the authority to buy stock in the companies and to increase the easy federal credit extended to them.

The bailout is needed, it is argued, because Fannie Mae and Freddie Mac have used their government-favored position to dominate America's secondary mortgage market. "Together, the two companies touch more than half of the nation's $12 trillion in mortgages by either owning them or backing them," The New York Times reported.

The collateral economic damage caused by their failure would be too great. We have no choice but to save them, it is argued.

How did we get to this place? It is part of a cultural and political transformation that is changing the meaning of the American Dream.

Our federal government was chartered to have strictly limited authority, primarily aimed at defending our liberty. It was designed to protect us from foreign enemies and to preserve our God-given rights.

This vision of Uncle Sam generally remained intact into the early part of the 20th century.

Since President Roosevelt's "New Deal" of the 1930s, however, American politicians have increasingly embraced a new vision. More and more, Uncle Sam's role was not just to protect our rights but also to guarantee us certain material benefits.

Fannie Mae itself was started as a New Deal government agency (privatized in the 1960s) that was intended to make it easier for people to buy homes. By buying up mortgages from banks, it allowed banks to issue more mortgages. By subsidizing lenders, it subsidized home ownership.

In a similar, but more dramatic way, Congress moved at about the same time to subsidize the retirement of seniors by creating the Social Security system.

In the 1960s, Congress created the Medicare program to subsidize health care for seniors.

In this decade, Congress created a Medicare drug entitlement to subsidize prescription medicines for seniors.

In the process, Americans became increasingly dependent on Uncle Sam. This was a good thing for federal elected officials: They could take wealth from one group (tomorrow's taxpayers) and give it to another group (today's voters).

But it also created two great problems: The bills for these benefits were bound to come due eventually, and a people dependent on government are by definition not an independent people.

The real American dream is not found in having a government that helps you pay for your home, your health care and your retirement. It is found in taking care of those things yourself, as a free and independent person.

The next generation will find this dream harder to achieve because of this generation's profligate dependence on an improvident Uncle Sam.

If Uncle Sam literally paid off every mortgage in America -- even those Fannie Mae and Freddie Mac have no involvement in -- it would cost taxpayers $12 trillion. That is a mind-boggling sum. But it is far less than the $53 trillion in unfunded liabilities the Government Accountability Office now says Uncle Sam has guaranteed to make good on in the form of Social Security, Medicare and other federal entitlements.