Memo to White House: Snowe is Not in the Forecast 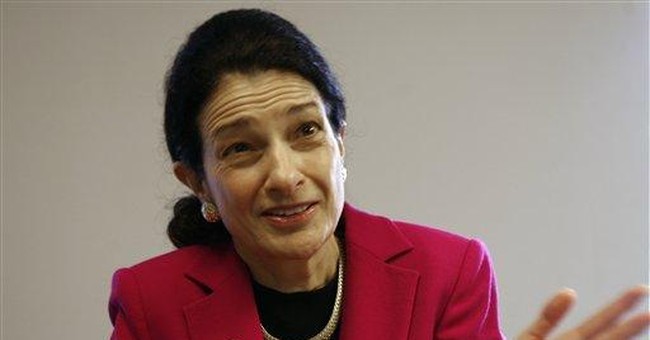 The email dings started around 10:00 pm, and continued throughout the night as folks throughout Maine sent me the latest report on CNN.com that quotes "sources" who claim, "President Obama and top aides have quietly stepped up talks with moderate Republican Senator Olympia Snowe of Maine on a scaled-back health care bill, according to two sources familiar with the negotiations."

I met with the Senator personally during the August recess back here in Maine when she spoke with dozens of Maine folks in a series of health care talks throughout the state.  Here is what I learned: She is worried about costs and the impact on the deficit, the public option plan is "off the table", she wants more private insurance companies in Maine (we have 3), and she doesn't support higher taxes - especially during a recession.

Those concerns and opinions were not from "unnamed sources," they were straight from Senator Snowe.  And just to be certain, last week I also spoke with her Chief of Staff and her Health Care Legislative Aide.  There is nothing new - other than the fact that Senator Snowe continues to be committed to working for health care reform with her colleagues in the "gang of six" and that "nothing has changed that would justify the CNN story."

I think the fundamental problem here is that the folks at the White House - who are very likely spinning this story in an attempt to pressure Senator Snowe - are totally misreading the way she operates.  While the "moderate" label is often used by the far right to protest Senator Snowe's actions - the left is about to learn a very important lesson from the moderate from Maine.

It is not an act.  It is not something Senator Snowe does to get re-elected or to curry favor.  She believes that there is middle ground and she looks for it. For her, middle ground means giving businesses the opportunity to join together and purchase health care - regardless of state lines. It involves tort reform, it involves ensuring folks have a skin in the game (not "free" government health care) and it involves truly bending the cost curve.  The bottom line is that Democrats in Congress, and this President, have failed to find the middle ground in the health care debate. In fact, they have veered so far off the center that they will find no sympathy - behind the scenes or not - from Senator Snowe or her other moderate colleagues.

As for the other "White House" strategy where CNN reports,  "Allies of the president hope that if Snowe accepts a health care agreement, she might also bring along her Republican colleague from Maine, moderate Senator Susan Collins." Don't hold your breath.

In fact, watch and listen to the video here - Senator Collins rejects the public option, and the health care reform effort in her own words, as she responds to a question from an SEIU member. (The relevant part starts at 55:25 and runs for two minutes).

So, my suggestion to the White House: put away your shovels, there is no Snowe in the forecast.

-Tarren R. Bragdon is Chief Executive Officer of The Maine Heritage Policy Center. Prior to becoming CEO in January of 2008, Tarren served for five years as the Center's Director of Health Reform Initiatives.

During 2001 and 2002, he served as the special assistant to the President of the Maine Senate, Senator Richard Bennett. In this capacity, he provided policy research, analysis and advice on a variety of policy areas, focusing on healthcare and tax policy.

From 1996 through 2000, Tarren served in the Maine House of Representatives representing District 119, part of Bangor. He is the youngest person ever to be elected to the Maine House, being sworn in when he was just eleven days past the constitutional requirement of twenty-one years of age. During his tenure in the house, he served on the Joint Standing Committee on Health and Human Services.