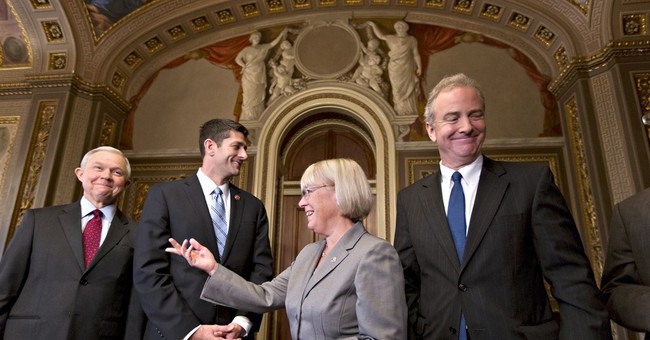 Last week, the Republican-controlled House overwhelmingly passed a water infrastructure bill with only three members (two Republicans and one Democrat) voting against. In what must have been a moving scene for beleaguered supporters of unabated big government, tea party “radicals” joined hands with Democrats to support special interests at the expense of taxpayers.

The Water Resources Reform and Development Act (H.R. 3080) authorizes $8 billion for U.S. Army Corps of Engineers projects like dam construction and river dredging that will benefit parochial constituencies and commercial interests. It’s called a “reform” bill, but a study of the bill by Taxpayers for Common Sense completely undermines that claim (see here).

The bill included projects that would benefit about half of the state delegations in Congress, by a rough count. For Georgia, there was an expansion of Savannah Harbor; for Florida, improvements to the ports of Jacksonville and Canaveral, not to mention the Everglades Restoration Plan. Texas and Louisiana won approval for the dredging of the Sabine-Neches Waterway, 79 miles billed as America’s “energy gateway,” and “the artery of southeast Texas.” Authorizations went to North Carolina, California, the Mississippi Coast, Maryland, Florida, Illinois, Ohio, Kentucky, Tennessee and the entire Great Lakes region.

In voting for the measure, small-government Tea Party faction members bucked conservative organizations, like the Heritage Foundation, that held sway over them during the October showdown that shutdown the government.

Water bills are unique: Tea Party or not, a member of Congress cannot go home and tell the locals that he voted against a deeper port or a shored-up beach. Most vote yes, issue a press release and if possible, go down to the jetty or the dam for a photo op. “The Peoria Lock and Dam is becoming a popular place for federal legislators to conduct news conferences,” the Pekin Times reported in Illinois over the weekend after the third visit from a member of Congress in a few months.

So powerful are the forces behind water bills that when President George W. Bush vetoed a $23 billion version in 2007 as “fiscally irresponsible,” Congress overrode him, one of only six veto overrides in 25 years.

The bill mobilized the big-time lobbyists, hundreds of them, according to lobbyist registration data, from power-houses like Exxon Mobil, the American Petroleum Institute and the National Corn Growers Association to every county, city and even villages that stood to gain.

For those who are interested in this topic, I highly recommend my colleague Chris Edwards’s essay on the Army Corps of Engineers. The essay details 200 years of pork-barreling, cost overruns, and often destructive and counterproductive endeavors that would be hard for even the biggest federal fanboy to justify.