Suzanne Fields
|
Posted: Sep 14, 2018 12:01 AM
Share   Tweet
The opinions expressed by columnists are their own and do not necessarily represent the views of Townhall.com. 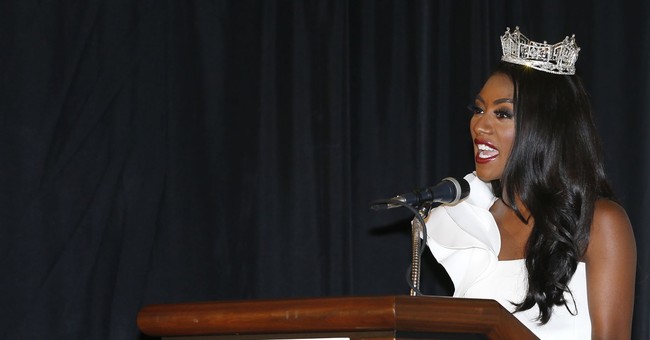 No bathing suits, but not bad. Miss America endures to play another year, this year with a winner from New York singing a lyrical aria from Puccini's "La Boheme." She tells with witty authenticity how she survived life in the Big Apple with true grit, moving five times from sublet to sublet as rents climbed up, up and away.

No Barbie doll is she, but a modern urban dweller with ambition in the arts.

Nia Franklin is black, beautiful, poised and a serious music student with a touching biography. She entered the competition after her father was diagnosed with cancer and she needed scholarship money to pay for college. She donated stem cells for his therapy.

If Miss America 1998 felt empowered walking across a stage in a bikini and 2-inch heels because it meant "I could do just about anything," Miss America 2019 could stake her claim to authentic selflessness with an Instagram photograph taken at a hospital where she lay with several IVs in her arms, helping her father. She went on to earn a master's degree in music composition at the University of North Carolina, and then a Lincoln Center fellowship took her to New York. One size does not fit all.

This year's contest called itself Miss America 2.0 (meaning it's supposed to be twice as nice as the original) and waded into feminist awareness in high-platform stilettos, Vaseline smiles and casual clothes almost as revealing as a bikini. The motto now is "A leap into the future. In step with the past." They might have called it "Miss America Meets #MeToo."

It's now part of Atlantic City lore that Gretchen Carlson, the new national chairwoman of the Miss America Foundation, former Fox News anchor and Miss America 1989, sued Fox for sexual harassment and settled for a $20 million squeeze on former Chairman Roger Ailes. She took over the pageant (and it's no longer called that) and made Miss America fit the image of Gretchen Carlson. She has not been embraced by her new colleagues.

The outgoing Miss America, Cara Mund of North Dakota, wrote a scathing public letter saying that in the last months of her reign, she was marginalized, bullied and reduced to talking points that emphasized the glory of Miss Carlson and the #MeToo movement.

It's a civil war over image, and the battlefield is littered with discarded ideas of what it takes to be a woman, reminding everyone that a liberated woman isn't limited to a stereotype. The pageant now calls contestants "candidates," as if they're looking for a job, but it's still a contest. And why not? Feminine beauty has always been prized and always will be, but so are discipline, practice and immense self-control. It's how these women project their beauty that counts.

There was always the snobbery of the elites toward the Miss America contest. Many girls from small towns across America saw it as a way to break into a world beyond small-town limitations. Although this year's contestants included a neuroscience graduate from Harvard and the outgoing Miss America went to Brown, most contestants did not go to Ivy League schools. Homemakers were ridiculed during the second wave of feminism for sacrificing for their daughters, but nearly every Miss America got to the top because a stay-at-home mother shared her dream.

Womanhood means many things to women. The first Miss America was crowned in 1921, a year after women attained the vote. It was all about the bathing suits. Atlantic City wanted to extend summer past Labor Day to keep tourists in town. Feminists never actually burned their bras in 1968, but they did protest the Miss America contest, leading a sheep into the arena. The beast was meant to compare the young women to sheep judged at the state fair on their teeth, hooves and fleece. Some of the women later regretted their insensitivity and cruelty, writes Gail Collins in "When Everything Changed," a history of modern feminism: "They should have been expressing solidarity with the sisters who were being paraded in their bathing suits, not making fun of them."

Today, beauty and comeliness are disguised as physical fitness, and despite aiming for "relevance," the television ratings continue to slide. Relevance is hard to judge, and sometimes the more things change the more they don't. A pretty girl is like a melody, still. A new Playboy club is opening in Manhattan, and hundreds of women have applied to dress up in bunny costumes. Some women say they prefer the iconic bunny ears and tail to a P***yhat.