The Not-So-Innocent 'Damsel in Distress' on Campus

Suzanne Fields
|
Posted: Sep 07, 2018 12:01 AM
Share   Tweet
The opinions expressed by columnists are their own and do not necessarily represent the views of Townhall.com. 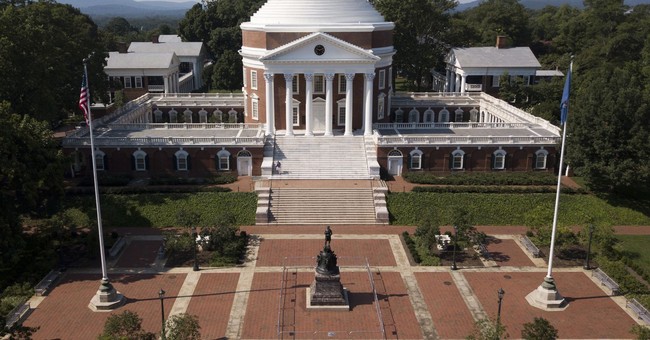 The American male is caught in the maelstrom of cultural change. Once the heroic images of World War II faded from bright colors into the darker tones of sepia, "the greatest generation" began a slow fade into history. Barely 500,000 of the 16 million men who fought in World War II are now alive. What has followed the greatest are several not-so-great generations (including my own).

The #MeToo movement, for all of the good it does in righting wrongs, has taken its toll on both innocent men and new standards of masculinity. When villainous men were rightly called to account for their sins, other men were made to look rotten, too. Many times they were not.

Public attention toward sexual harassers has focused on large men in media and movies who have been toppled from their pedestals, and the newest generation of young men on the college campuses has suffered collateral damage. The undergraduate with a shot at being Big Man on Campus now has to be especially wary of how he behaves with women, sometimes making him a more reluctant lover than Romeo.

We remember the young woman who made the cover of Time magazine carrying her mattress as evidence of a crime by the man with whom she had consensual sex. He was exonerated by the university but was nevertheless shamed, mortified and ostracized in the court of public opinion. Bearing false witness carries small stigma.

False accusations on campus have often been tilted against the accused, scorned by weak and intimidated college administrators who submit to government dictates for establishing guilt lest they lose the taxpayer money dispensed by righteous bureaucrats. A notorious "Dear Colleague" letter sent out by the U.S. Office for Civil Rights during the Obama administration in 2011 -- it went to 4,600 institutions of higher learning that receive public money -- set out standards for evaluating sexual behavior between the sexes. A man falsely charged could more easily be an innocent victim because a "clear and convincing standard" of evidence was reduced to a "preponderance of the evidence."

That's a big difference. Such an expansive definition could include accusations of misconduct, "unwelcome sexual advances, requests for sexual favors, and other verbal, nonverbal, or physical conduct of a sexual nature." Black-and-white movies of an earlier time demonstrate rites of romance that today would be included in a catalogue of sexual sins. The new standards deny cross-examination of accusers, a crucial element of American criminal law, for fear a campus "snowflake" might melt under rigorous but necessary interrogation.

But corrective help to this sad state of affairs may finally be on the way. The revised regulations that ruined the lives of many falsely accused young men will be revised again. Betsy DeVos, the secretary of education, has rescinded that infamous "Dear Colleague" letter, which led to kangaroo courts on many campuses. She promises a more transparent due process.

Getting to fair standards won't be easy in the current climate. Critics, including Sens. Bernie Sanders and Kirsten Gillibrand, have denounced her reform as a "disgrace" and "shameful." They join a large chorus of people screaming for her head.

She got surprising media support, however, from NBC host Megyn Kelly, who has entertained guests from the #MeToo movement but now criticizes the Obama administration for "completely eroding" the rights of the accused on the college campus. She tells the story of a student she knew at Colorado State University-Pueblo, a football player with a 3.7 grade-point average and aspirations to become an orthopedic surgeon. He had what he thought was a "great" consensual sexual relationship with a campus sweetheart. The sweetheart described their sexual encounter to her roommate, remarking that he did not use protection against disease and pregnancy for a couple of seconds. They resolved the problem, had a great night, but the roommate said that the couple of seconds was rape and reported it to campus authorities. The young man was found guilty of transgression by the university and suspended until after the young woman graduates. Many anecdotes like this reveal a flawed -- and biased -- procedure for establishing guilt.

Robert Shibley, executive director of the Foundation for Individual Rights in Education, which has worked to restore due process on campus, says the DeVos-proposed new rules could "go a long way toward restoring meaningful due process protections to the campus justice system." This would protect both student accuser and male students accused.

Change won't be easy in the polarized environment, where universities have become exceedingly protective of their "sex bureaucracies" with politically correct attitudes deeply imbedded in what passes for justice. The tradition of male aggressor and the damsel in distress endures, sometimes when there is no distress.