Suzanne Fields
|
Posted: Jun 09, 2017 12:01 AM
Share   Tweet
The opinions expressed by columnists are their own and do not necessarily represent the views of Townhall.com. 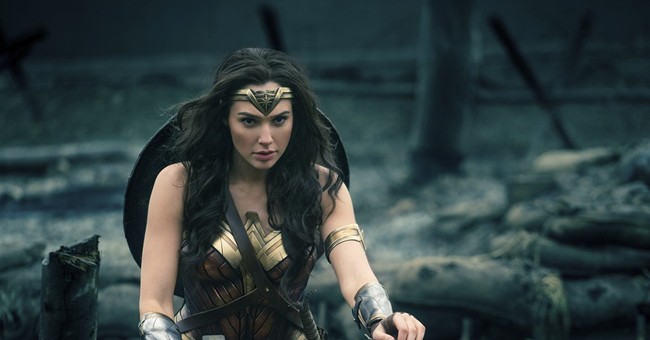 Finding a safe space, where never is heard a discouraging word and never are the skies cloudy all day, obviously has a wide appeal. Safe spaces were born on the campus to accommodate "snowflakes," the sensitive, fearful and fragile folk who imagine themselves unique and demand to be treated that way.

But supply has outstripped demand, and a safe space is coming soon to a theater in a neighborhood near you.

"Wonder Woman" is destined to be the biggest hit of the year. The Jewish weekly The Forward calls it the greatest boon to the chattering class since the election of Donald Trump. One Hollywood purveyor of hype says it might even save Warner Bros. It posted over $200 million in ticket sales worldwide in its first four days and stirred dozens -- maybe hundreds, if counting the blogs in flyover country -- of reviews and "reaction pieces" that guarantee riches, controversy and enhanced fame for Gal Gadot. The former Israeli soldier, model and Miss Israel portraying the Amazonian warrior demonstrates that anything a man can do, she can do better.

Diana, princess of the Amazons, was raised on a remote island, the ultimate safe space, and trained to be a warrior who cannot be bested in combat. She rescues a pilot whose plane crashes into the sea, and he tells her about a great conflict raging in the rest of the world. She is persuaded that only she can save that world. And so, she leaves home for the first time, her innocence intact, to fight at the side of men in another war to end war, and she discovers her destiny. The movie should be the final answer to anyone who still cavils at the notion that women can be as effective as men in military combat.

But now, critics raise many new questions. Is it OK that Wonder Woman is drop-dead gorgeous, and that men are allowed to notice? Is she feminist enough? Is she too feminist? (Surely, that's impossible.) Since Gadot is white, is the movie a totem for the white Zionist supremacy conspiracy?

Whether it's a good movie with a cracking story well-told is irrelevant in an age when reality and entertainment have become one. One of the crucial questions still to be reckoned with is whether Gadot's dark skin, dark hair and sultry dark eyes are enough to make her an authentic woman of color (or WOC, in politically correct argot). Is it politically incorrect to ask?

These are questions at least as important as whether Trump's presidential campaign colluded with the Russians, whether former FBI Director James Comey's testimony will shake the foundations of the republic, or whether the American pullout from the Paris climate agreement dooms life as we know it to a dark and watery grave. Wonder Woman will see about all that. She once lived in a comic book, encouraging little girls to think they could go to war against evil with their big brothers. But last year, on the 75th anniversary of the first appearance of Wonder Woman, she was designated by the United Nations as an honorary ambassador for the empowerment of women and girls in order to promote "gender equality." The occasion took on the trappings of state, with an undersecretary general on hand to mix and mingle with the actress Lynda Carter, who played Wonder Woman in an earlier movie, as well as director Patty Jenkins and others in the cast.

Gadot would appear to be a woman for all seasons: an actress with a string of successful movies who is married (and to a man), has two daughters and tools about Israel on a black Ducati Monster-S2R motorcycle that would have impressed Steve McQueen. Or even Wonder Woman.

It's the mark of our superficial age that a movie can become reality for a generation of snowflakes. Some of the reviews of "Wonder Woman" reflect how deeply the age has embraced alt reality. One reviewer in the San Francisco Chronicle wrote, "What lingers ... is the feeling of hope that the movie brings, that it someday might be possible for female rationality to defeat male brutality." A review in the Washington Post said: "'Wonder Woman' has raised the bar. Now let's see if the boys can clear it." One writer in The Boston Globe said: "It matters that a woman is calling the shots in this movie. Diana and her fellow warriors are figures of simple, admirable strength, and while there's a simmering romance with Trevor ... he knows he's the girlfriend here."

Good movies are good fun, and good acting can transport an audience to the unseen world of the imagination. But a movie is only a movie, after all, and the actual world is neither a movie nor a comic book. Reality comes with no money-back guarantees.