The Boys Fall Into the Gender Gap

Suzanne Fields
|
Posted: Oct 28, 2016 12:01 AM
Share   Tweet
The opinions expressed by columnists are their own and do not necessarily represent the views of Townhall.com. 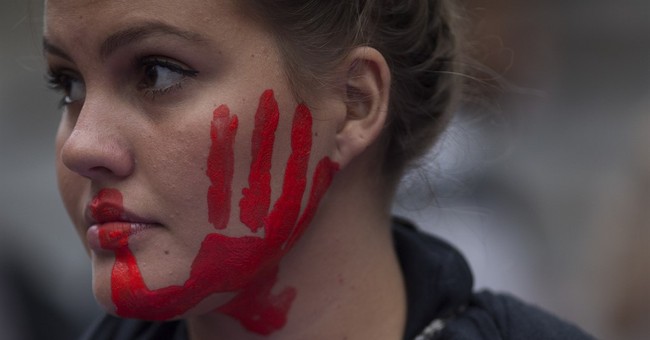 Trending
Reading is not for sissies, as the front page of the newspaper demonstrates every morning in the homestretch of a raucous presidential campaign. But there's a deeper problem, one that civility and good manners won't cure.

The really bad news is that boys are falling into a gender gap far removed from mere politics. Great numbers of boys won't read, even when they can, and when they do crack open a book or pick up a newspaper or magazine, they don't stay with it very long. The concerns in a competitive technological age are obvious.

Boys skip pages to avoid the hard stuff, and understand less. Extensive studies in both the United States and Britain show this clearly. "Boys of every age," the surveyors found, "no matter the nature of the literature before them, typically read less thoroughly than girls." They take less time to process the words, lazily skipping parts with abandon. They choose books too easy for them and fail to move on to tougher material."

This has cultural and political implications beyond the concerns of political candidates, authors and newspaper editors. And a lot of people, in and out of newsrooms and faculty lounges, are deeply concerned. A survey by the Center for Education Policy found that "in every state and in every grade, boys are trailing behind girls in reading, (and it's) the most pressing gender gap facing our schools." The problem is only worse now, as a new study in Britain shows.

The reading and comprehension gap between boys and girls, teachers speculate, is responsible for another disturbing phenomenon. Over the past quarter century graduation rates have steadily increased among young women, but not among young men. Barely 40 percent of the college graduates in one recent year in the United States were male, according to the Center for Education Policy. Many teachers and administrators think this is directly related to the habits of reading that boys develop in the early grades and continue with through high school.

Since the National Assessment of Education Progress began measuring this gap in the late 1960s, with measurements taken at ages 9, 13 and 17, the gap has fluctuated. In 2004, the gap among fourth graders narrowed to 5 points, but had expanded by 3 points four years later. The gap in high school was a stunning 11 points.

The phenomenon is not altogether new, though the distractions are. Three centuries ago, writes Peg Tyre in her book "The Trouble With Boys," the English philosopher John Locke lamented that "male students were not able to write as well as female students, and he marveled at how much more easily girls picked up foreign languages."

A librarian in Santa Clara County, California, reported that she has always found it more challenging to find books, particularly books of fiction, to hold the interest of boys.

There's no appetite among boys, for example, like the appetite among girls and women for the works of Jane Austen. Not so long ago boys eagerly read Mark Twain's stories of Tom Sawyer and Huck Finn and his own adventures on the Mississippi River, or the boys' baseball novels of John R. Tunis. But now, not so much. Perhaps they could be introduced to "True Grit," by Charles Portis, a robust adventure on the nineteenth-century American frontier, full of outlaws, gun fights, deadly rattlesnakes and saloon brawls -- all things that ought to keep boys interested.

But the research in Britain shows little difference in how fiction and nonfiction books attract and hold the attention of young men. Boys often choose nonfiction but don't read or comprehend it any better than fiction. Girls do better than boys on both.

Keith Topping, a professor of social research at the University of Dundee in Scotland, who led the British study, said "a lot of people will argue that boys are much less likely to read 'story books' -- fiction -- than girls and that's one reason why girls are better (at it) than boys. ... Boys tended to choose nonfiction but were not reading it any better than girls.

"What you need," he said, "is teachers, classroom assistants and librarians spending time with a child to talk about choices."

Good teachers are creative. Anna Konig, an English teacher for boys and girls with emotional and social difficulties, invited a "therapy dog" into her class, thinking it would get boys involved. She persuaded eight boys in the class to read to Perdy the Labrador, "who offers a non-judgmental ear." During the week, the kids began discussing what book they think Perdy would enjoy.

The grades of the boys have risen two levels. "There's a real buzz around reading now," Konig said. "The only drawback is a slightly hairy classroom at the end of each session." But the trade was worth it in a classroom gone to the dogs.