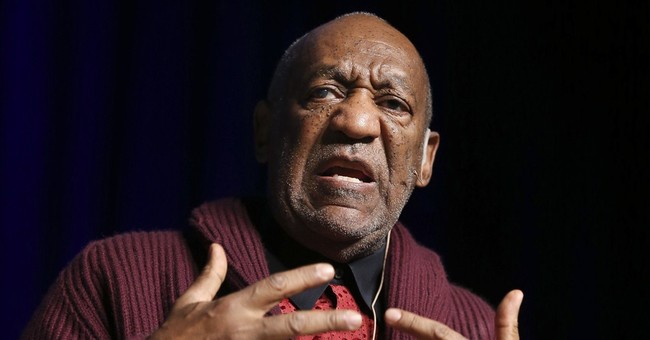 What's fascinating about the coverage of the persuasive accusations against Bill Cosby, now 18 and rising, is that race doesn't dominate. There's an outcry at the abuse of women, and he's shredded the healthy black father family man image he carefully cultivated on his sitcom, but you don't read or hear notice taken of the fact that the women who say he drugged and raped them were usually white.

Nor is the culture called racist for having turned Bill Cosby into an angry black man who spent his aggression against those vulnerable white women. There's anger at a celebrity's abuse of power, that an icon of family values is a violent hypocrite, but it's not about race. No doubt a multitude of psychological and sociological interpretations will follow. The outrage is that he abused male power, destroyed a powerful positive image and broke a lot of black and white hearts.

Rape and harassment have become equal-opportunity degradations. If many of his prey didn't speak out, it was because he was so rich, powerful and loved by the public that nobody would have paid attention to the accusations.

"One of the reasons that Bill Cosby has been a beloved American comedian for six decades is that he offered one of the most soothing versions of the story of race in America," writes Rebecca Traister in The New Republic. He made both black and white feel good about racial progress, since nobody knew that his was a rake's progress. He was soothing about the dignity of the black family and the promise that those who did not yet enjoy that life might yet achieve it. That message is not lost in the scandals.

The followers of "Dr. Huxtable," as Mr. Cosby's character was called, were from every ethnic group, drawn by the idea that middle-class family values are not merely white values. It's what President Obama implies when he talks about expanding the middle class economy to include blacks "moving on up." Moral values are crucial to that.

As the granddaughter of Russian immigrants who endured the pogroms enforced by Cossacks before they managed to get on a boat to America, the aspiration toward middle-class values was crucial to my story as well. My father was an eighth-grade dropout, a bookie by trade and threatened with jail every time the cops raided his "establishment." But both before and after he joined the middle class, as a prosperous builder, the soothing voice of the"Dr. Huxtable" voice was his voice, too. The obstacles of ancestry could be overcome.

"The Cosby Show" didn't soothe so much as smooth, softening the harsh edges painful to every family. The color of the Huxtable family's skin was a reminder that even if many blacks (or immigrants) didn't have such a life, they might have one soon enough. Middle class values, accompanying middle class money, are the great equalizers.

Later, after Bill Cosby made millions and stepped from behind the actor's mask to take his message directly to the people, he told absent black fathers to shape up and they could win life's lottery. The color of skin, he said, is only one element in becoming who you are.

His overt political message was about education, discipline, self-reliance, self-respect. He refused to blame racism for continuing to keep his people down. In 1997, when his son was murdered while fixing a flat at the side of the Hollywood Freeway, his wife Camille wrote a bitter op-ed in USA Today, blaming white racism. Her husband nevertheless kept up his rhetoric against bad ghetto behavior, black-on-black crime, demeaning rap music and irresponsible black baby daddies who abandon their children.

In commemorating the 50th anniversary of the Brown v. Board Education decision mandating the desegregation of the nation's schools, he famously scolded a kid for stealing a slice of pound cake: "If you get caught with it, you're going to embarrass your mother."

Many in the black establishment attacked the rich entertainer as an "Afristocrat" who blamed the poor for being the poor. But if white liberals and black militants didn't like what they perceived as "blaming the victim," his speech was regarded as an act of "empowerment" in black churches, barbershops and barbecue joints. The message entered the black mainstream, pushing blacks forward from "victims to victors" in the tradition of Booker T. Washington's appeal to "black self-sufficiency" at the turn of the 20th Century.

One of the sad consequences of the fall of Bill Cosby is the exposure of his cynicism. Can his virtuous message survive? It must. We can't let the disgrace of the messenger kill the message.