War in the Gender Gap Evaporates 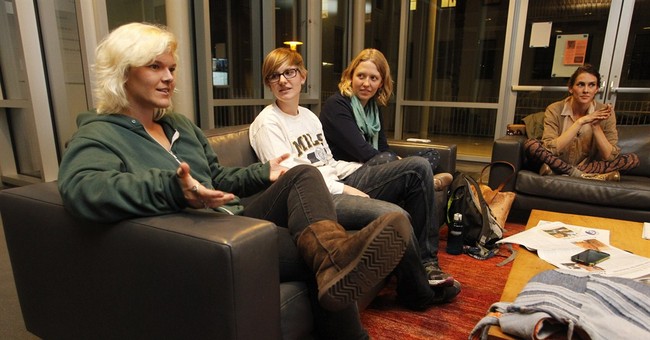 The phony "war against women" has taken a strange and unexpected turn. Republican candidates are promoting expanded access to birth control, with contraceptives available over the counter. Democrats in varying shades of blue dismiss something they've always wanted as mere Republican politics. You would think Democrats would be grateful for enhanced access for women, a dream come true.

This is the catch 22 of the 2014 campaign. Democrats and Planned Parenthood are obviously afraid that if Republicans get credit for this pip of an idea, they'll fall into the diminishing gender gap and never be heard again. The latest polls show Democrats hold only a 1-point lead among women on the generic congressional ballot.

It's desperation politics to scorn a proposal to give women greater flexibility to prevent an unwanted pregnancy, eliminate a costly visit to a doctor and reduce abortions. Over-the-counter sales would make the pill less expensive for the growing number of uninsured women under Obamacare, as well as for women who work for companies with insurance but whose employers hold religious beliefs that prevents them from paying for birth control. The proposal is endorsed by the American College of Obstetricians and Gynecologists and the American Academy of Family Physicians. This sounds to me like a win-win proposition.

The birth control pill is the most widely used method of contraception for American women, and if it were available without a prescription, sales volume would likely reduce the cost, now estimated to be about $50 a month, or less than $2 a day. Over-the-counter sales would eliminate expensive doctor's visits and time-consuming clinic visits. The Alan Guttmacher Institute finds that more than 17 percent of American women in their childbearing years between 15 and 44 rely on the pill.

Eliminating it as a prescription drug couldn't happen overnight. Only a bipartisan push from Congress would persuade the U.S. Food and Drug Administration to change its regulation of the pill, but an unlikely coalition of conservatives and liberals could make it happen quickly. It's natural for libertarian support, and the conservative Family Research Council has taken no position against contraception unrelated to abortion.

The great obstacle, of course, is that support for the idea undercuts the Democrats' "war on women" and reduces partisan noise. "What's happened with the over-the-counter birth control issue," Republican pollster Kellyanne Conway tells National Public Radio, "is that the Democrats didn't see it coming. They think they've got a monopoly on talking to women from the waist down."

A dismissive Planned Parenthood television advertisement says candidates who support the change "will turn the pill into yet another bill." Well, that's what politics is all about. Lobbying pressure and advocacy help, too. A doctor's prescription is especially burdensome for poor minority women, and it's difficult to find a pro-choice voter who opposes over-the-counter contraceptives.

None of the Republican candidates in this election cycle so far resemble any of the chest-thumping red-hots of the last cycle. Rep. Cory Gardner, locked in a tight race against Democratic Sen. Mark Udall in Colorado, is described as a "new kind of Republican." In a television ad, Mr. Booker, who supports the free-the-pill initiative, paints Sen. Udall as the man who would "keep government bureaucrats between you and your health care plan." Two driving issues fuse neatly.

Gov. Bobby Jindal of Louisiana is a cheerleader for over-the-counter sales of the pill. He says Democrats have "demagogued" the contraceptives issue. "Contraception is a personal matter," he writes in The Wall Street Journal. "The government shouldn't be in the business of banning it or requiring a woman's employer to keep tabs on her use of it."

The Republican "war on women" has always been an absurd campaign slogan, reeking of mendacity and bad faith. Women are not a monolithic mass in their preferences and attitudes, and their representatives in Congress know it. Politicians are always looking for an issue that works in appealing to a constituency, and contraceptives could be the long-sought unifying force of both liberals and conservatives. It would give women the ability to prevent unwanted pregnancies and the power to keep their most private decisions private -- no doctor, no government intrusion. If both Democrats and Republicans support this sensible idea, this "war on women" is over.

Democrats attack at their peril the messenger who delivers a message women are eager to hear. Daniel Payne, a self-described "health-nut anti-synthetic Catholic natural foodie freak," writes in the Federalist that in spite of his religious beliefs and personal preferences, he thinks "there's no justifiable reason for me or for anyone else to impede a woman's access to something like the pill." That sums it up for most of the rest of us, too.