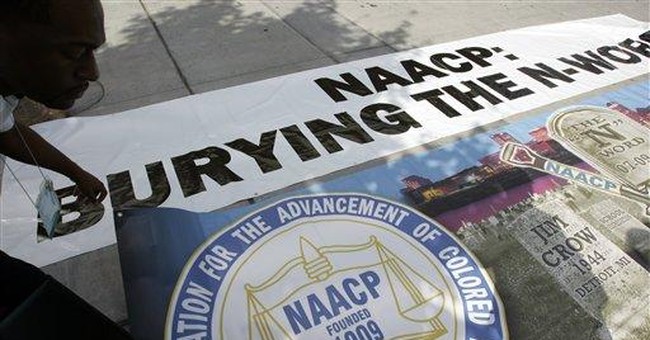 Trending
Race has become the third rail of American politics. Touch it, and you die. It's the rail some of our angriest Democrats want to ride Mitt Romney and the Republicans out of town on.

The word "racist" is the new shorthand for "evil," replacing Hitler as the all-purpose evil those with stunted imaginations accuse their opponents and enemies of. Not so long ago, racism was a crime so heinous that merely to be accused of it was all the proof needed for conviction. Racism and bearing false witness are still heinous, but like "Hitler," through reckless use is losing some of its sting.

In the overheated anger of some Democratic partisans, Mitt Romney has become the personification of racism. There's not a shred of evidence that the presumptive Republican nominee is a racist, or a bigot or a zealot or even a fanatic. In fact, it's his tone of moderation and quiet sobriety (as befits a proper Mormon) that frustrates many of his supporters, who want him to toughen up and get mean on the stump.

But here's how a columnist for Rolling Stone magazine describes him: "(He) is not merely unlikable, and not merely a fatuous, unoriginal hack of a politician, but also a genuinely repugnant human being, a grasping corporate hypocrite with so little feel for how to get along with people that he has to dream up elaborate schemes just to try to pander to the mob."

The columnist, one Matt Taibbi, is angry because the campaign is so uncivil. What provoked his tantrum was Romney's appearance before the Houston convention of the NAACP -- one of his best speeches of the young season -- when he spoke bluntly, plainly and respectfully of his differences with black Democrats. What specifically provoked the rolling stone was Romney's remarks about the Houston speech the next day to "a mostly white audience in Montana."

"I gave the NAACP the same speech I'm giving you," Romney told the Montana audience. "When I mentioned (in Houston) that I am going to get rid of Obamacare, they weren't happy. That's OK. I want people to know what I stand for, and if I don't stand for what they want, go vote for someone else, that's just fine. But I hope people understand this, if they want more stuff from the government, go vote for the other guy."

Romney was enthusiastically booed, as has been widely reported. But not by everyone in the audience. He was cheered for some of the things he said, notably his affirmation of familiar religious and moral values, and he received a standing ovation when he finished his speech.

The unexpected problem for the plug-uglies on the left is that neither Romney nor Republicans and other conservatives are acting like Republicans and conservatives are "supposed to act." They're not following their assigned roles in the script with harsh language and unyielding prejudices, reflecting what has happened everywhere. The n-word, for example, has been long banished from the conversation, at least in public, by nearly everyone.

Sometimes the "racism" ascribed to conservatives is so subtle that no one but the accuser could recognize it. Recent observations that the president looks '"skinny" is supposed to be racist code for a type who is "good at basketball." Mocking the former law professor is said to be code for "uppity." Any criticism or observation from certain quarters is code for racist.

The fact is that it's the Republicans who have blazed the way for greater acceptance of blacks in high office. George W. Bush appointed Colin Powell as his first secretary of state -- the first black to hold such high office in America -- and when he departed he was replaced by Condoleezza Rice. In the Republican presidential primaries earlier this year, Herman Cain, a relatively obscure black businessman, unexpectedly prospered and briefly led in the polls.

Peggy Noonan, a speechwriter for two Republican presidents and a columnist for The Wall Street Journal, tells of making a speech the other day to a group of businessmen, no doubt with a generous sprinkling of conservatives and Republicans. When the conversation turned to Romney's prospective vice presidential choices, "I spoke of a few, and then said Condoleezza Rice might be a brilliant choice. Here spontaneous applause burst forth."

Indeed, it was such goodwill that fueled the unlikely Condi boomlet, despite Rice's well-known social and foreign policy disagreements with conservatives, none of them about race, that would make her a calamitous choice for Mitt Romney, who has yet to fully reassure conservatives that he is really and truly one of them.

Nevertheless, the Condi boomlet speaks volumes about where we are and how far we've come in so short a time. It will be something to think about when the campaign gets ugly and Democrats and Republicans start throwing kitchen sinks at each other.