Cultivating Her Own Garden 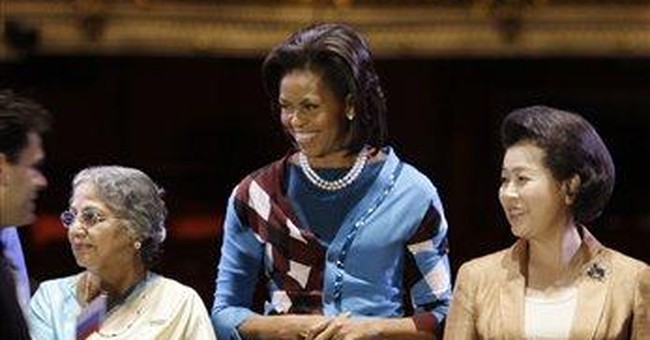 Wonder Woman she's not. She has Wonder Woman's good biceps, as we've seen in the photographs, but she's hard to picture in red, white and blue tights and starred spangles.

Nor is she Jackie Kennedy, with Jackie's perfect taste. Jackie would never have sent those tacky plastic toy helicopters to the children of British Prime Minister Gordon Brown.

Michelle has planted vegetables on the south lawn of the White House, just like Eleanor Roosevelt's World War II victory garden -- and unlike Eleanor, she hasn't been accused of meddling in policy, not yet. She has overcome some of the suspicion and hostility she stirred during the campaign, particularly after she said that "for the first time in my adult life I am proud of my country."

If Michelle Obama is a work in progress, so are the Americans always eager to take the measure of a new first lady. Her poll numbers have risen and her negatives have declined since they were first measured last summer. A new Washington Post-ABC News poll shows her favorable ratings jumping to 76 percent, up 28 points since summer. Negatives have fallen, mostly because some Republicans have changed their opinion of her.

Some conservatives say they like the way she's serious about being "Mom in chief," expanding a role that includes concern for the travails of military families. She doesn't just talk about the importance of volunteer work, either, but handles the ladle at soup kitchens.

She values private spending. The Obamas are redecorating the domestic quarters at the White House with their own money, though the first family is entitled to spend $100,000 to freshen up the living quarters every four years. (When they leave they'll be entitled to the furniture, unlike the Clintons, who mixed up some of their own belongings with things that didn't belong to them when they left the White House.) She knows it's not the right time to tap taxpayers to decorate a perfectly good house while so many Americans are losing their homes. Smart thinking.

While Michelle's poll numbers climb, her husband's are just beginning to falter. Nearly half of those who don't like what he's doing in his job like what she's doing in hers. Curiously, it's our metrosexual men who prudishly titter about Michelle's clothes. Maureen Dowd plumbs the newsroom at The New York Times to learn what America is thinking and quotes her colleague David Brooks that it's time for the first lady to put away her sleeveless tops and "cover up." Says Brooks: "She's made her point. Now she should put away Thunder and Lightning."

Does a muscular woman threaten male pundits? Grandma Grundy, who in Victorian times demanded skirts for the legs of the piano, has given way to Grandpa Grumpy, who doesn't like bare arms. But fitness is about health, too: With 38 percent of black American women and 23 percent of white American women overweight and vulnerable to type 2 diabetes, high blood pressure and heart disease, Michelle is an example of healthy living.

"First lady" is the most vaguely defined job description in Washington. Jackie Kennedy scoffed that "first lady" sounded like the name of a saddle horse. Her husband agreed: "A man marries a woman, not a first lady." There's the rub. He runs for office, and she's compelled to go along for the ride, like it or not. From Martha to Michelle, first ladies have been adored and abhorred and every permutation between, judged first for their fashion sense.

Martha Washington dressed simply and plainly only in dresses made in America of American fabrics, boosting local markets. No outsourcing at Mount Vernon. Martha knew what Michelle knows, that what she wears influences what other women buy.

Michelle Obama follows one of the most popular first ladies. Laura Bush fused the feminine and the feminist, the mother and the librarian, stressing the importance of books for young children. She didn't have the political baggage of her predecessor, whose stormy marriage was soap opera writ large and whose personality was "in your face," whether dealing with Whitewater, "wifewater" or Hillarycare.

Michelle as first lady sends a different message, whether to poor and oft-neglected children here, or to the masses in London and Europe, where she is this week with her husband, inspiring by building on the black experience of overcoming obstacles. Maybe she arm-wrestles him about the takeovers and bailouts, but he's still the president and she's not. Nevertheless, she gets to cultivate her own garden.

Rebecca Downs
Chilling Changes Are Coming Out of the Biden Administration's HHS Redefining Sex
Rebecca Downs
The FBI Finally Admitted What We All Knew About the 2017 Attack on the GOP Congressional Baseball Team
Matt Vespa
Does Biden Hate the Police? You Have to Wonder with His Updated Proclamation
Rebecca Downs