Waking From the Dream 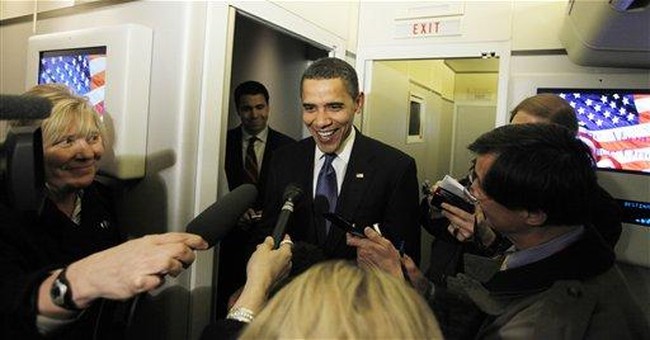 Barack Obama is beginning to sound just a wee bit frantic for a man who has been president of the United States for a little more than a fortnight. A month from now, who knows? He got his stimulus package through the Senate, but it was a partisan victory. But for two women and Arlen Specter, always reliable Democratic allies in a partisan showdown, he got no help from the Republicans.

The withdrawal of Judd Gregg as his commerce secretary further demonstrates the empty promise of changing the way Washington works. His performance at his first press conference earlier this week was remarkable for the tone of his remarks. This was no longer the man who told us through the summer and fall that proper manners and good faith would be enough to dissolve partisanship in Washington, that the grinding wheels of government would roll happily ever after with never a howl of pain or a squeak of triumphalism

His kind words for Republicans have become the scolding of an affronted president, the offered hand a partisan fist. He had picked Republicans for his Cabinet, had gone up to Capitol Hill to visit Republicans in their lair, even invited some of them to the White House, and they responded with "the usual political games."

"I suppose what I could have done was to start out with no tax cuts, knowing that I was going to want some, and then let them take credit for all of them." He pulled up scorn and poured it on. "When I hear from folks who presided over a doubling of the national debt, then I just want them to not engage in some revisionist history," he said. "I inherited the deficit that we have right now, and the economic crisis that we have right now."

The new president is learning that it takes more "charm" to pacify Washington than any one man has -- even the man some call "the Dali Bama." He sounds incredulous that some of the Republicans are playing politics, forgetting that politics is what congressmen play, that it's the media's job to egg them on. He might as well rebuke linebackers for making quarterbacks miserable.

Most ominous of all, from the president's point of view, certain correspondents and pundits have noticed, many for the first time, that the president is mortal. Cracks are showing in the media bubble that protected him for so long. When Fox News' Major Garrett quoted Joe Biden's remarks suggesting that the stimulus might not work -- "If we do everything right, if we do it with absolute certainty, if we stand up there and we really make the tough decisions, there's still a 30 percent chance we're going to get it wrong" -- and asked what he thought about that, the president showed exasperation for his veep.

"You know," he said, "I don't remember exactly what Joe was referring to, not surprisingly." There was a ripple of giggles, and the president continued: "I think what Joe might have been suggesting, although I would not ascribe any numerical percentage to any of this, is that given the magnitude of the challenges that we have, any single thing that we do is going to be part of the solution, not all of the solution."

The vice president had said no such thing, and the president, who knows and respects the meaning of words, knew it. As he stretched like a yogi to make his own interpretation of this verbal exercise, he may have sought harmony, but the media chorus now waking up to the meaning of his mantras is less than serene.

He still has sex appeal going for him, but there's evidence that even the fantasies about him are beginning to provoke pangs of guilt. Judith Warner, a columnist for The New York Times, tells of dreaming about Obama: "He was taking a shower right when I needed to get into the bathroom to shave my legs, and then he was being yelled at by my husband, Max, for smoking in the house. It was not clear whether Max was feeling protective of the president's health or jealous because of the cigarette."

This may be more than we need to know about Warner's intimate grooming, or her fantasies, but she demonstrates how consumed the media chorus has been with their object all sublime. Warner herself seems to see what's coming.

"If I were Obama (or Michelle, for that matter)," she writes, "I'd be a little scared. After all, when people are wearing their egos on their sleeves, it's so easy to bruise their feelings. What will happen when fantasy turns to contempt?"

What, indeed. That's when Barack Obama, apostle of good will and foe of partisanship, will understand why he'll never achieve nirvana in Washington.