A Face-Off for the Future 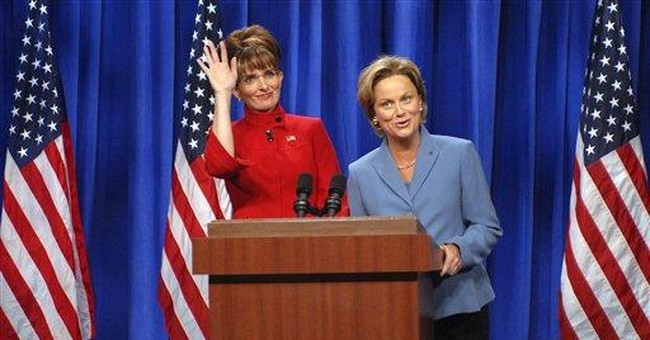 The National Organization for Women endorses the Obama-Biden ticket. NOW ought to change its name to WOW. Such stunning independence. A working woman with five children, the governor of a sovereign state, isn't a sufficient accomplishment. Who knew?

Actually, Sarah Palin is a triumph for the "third stage" of feminism. The first stage of the modern woman's movement saw the destruction of the "feminine mystique." It's been almost 50 years since Betty Friedan argued that women lived in a "comfortable concentration camp" in the suburbs, prisoners with lots of rooms but no identity to call their own. She overstated the case, insulting full-time wives and mothers, but touched a nerve in many women who wanted careers that were closed to them.

"In the first stage, our aim was full participation, power and voice in the mainstream, but we were diverted from our dream," she would write. "And in our reaction against the feminine mystique, which defined women solely in terms of their relation to men as wives, mothers and homemakers, we sometimes seemed to fall into a feminist mystique which denied that core of women's personhood that is fulfilled through love, nurture, home."

She urged women to recover their maternal strengths even while working outside the home, and that set off the mommy wars. Stay-at-home mothers and working mothers fought each other over the choices they made in the "second stage" of feminism.

Man-bashing accompanied the mommy wars. Husbands of working wives were accused of suffering from something cleverly called premature emasculation. I once met a man who told me proudly that he went alone to Lamaze birthing class when his wife went away on a business trip. Men in those days were either macho or mommy-pecked, affecting either John Wayne or Dustin Hoffman.

Hillary Clinton was famously caught in the crossfire of the second stage of the war between the sexes. When she moved into the White House as first lady, she changed roles and hairdos so many times she revived the stereotype of the woman who can't make up her mind. Her husband's caddishness became a blessing in disguise. Large numbers of women rallied behind her as victim, but their sentiments could carry her only to the U.S. Senate. She later failed to keep her balance on the seesaw of a presidential campaign. She wanted to be as tough as a man, but a man who could cry at the hard places of the campaign.

Sarah Palin presents a different psychological portrait. We can put aside the pit bull and the lipstick. She's comfortable balancing femininity and toughness. We hear jokes about her hunting and fishing prowess, as though she had been nursed on the milk of wolves, like Romulus and Remus. She actually did learn to shoot a gun at age 8. Her father tells how nearly all the game and fish on the family dinner table was shot or caught by the family.

Palin doesn't have to cultivate her femininity or demonstrate toughness by chasing a shot of Crown Royal with a mug of Old Styles. She's not one of the boys, but knows how to take them on. She's more like Annie Oakley, who likes "doin' what comes naturally."

Hillary never looked as comfortable in her skin as she did when, after she lost to Barack Obama, she delivered a forceful endorsement of the man who defeated her at the Democratic National Convention. Just as "Mourning becomes Electra," losing becomes Hillary. The unexpected grace may bring her back for another round in four years. If a President McCain for whatever reasons defers to others in 2012, we can look forward to a doozy of a debate between Hillary and Sarah. We got a preview on "Saturday Night Live" of what to expect:

Tina Fey as Sarah and Amy Poehler as Hillary face off, with Sarah striking beauty poses and telling how men find her a "babe" and Hillary, fuming, complaining that when she ran she was called a "harpie."

Fey as Palin: "I think women everywhere can agree, that no matter your politics, it's time for a woman to make it to the White House."

Here's Poehler as Hillary: " No. I didn't want a woman to be president. I wanted to be president, and I just happen to be a woman. And I don't want to hear you compare your road to the White House to my road to the White House. I scratched and clawed through mud and barbed wire, and you just glided in on a dog sled wearing your pageant sash and your Tina Fey glasses."

Welcome, NOW, to the third stage of feminism.