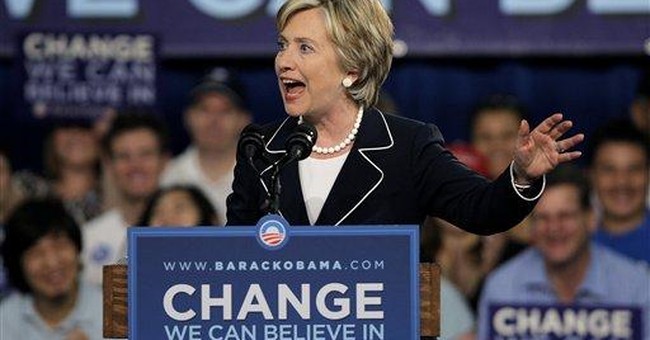 There's nothing mellow about Hillary Clinton. She's the greatest polarizer since Richard Nixon. Her defenders are fierce, her detractors ferocious. It's not because she's a woman that she's "the might have been" as Democrats gather this week for their convention in Denver, it's because of the kind of woman she is.

Golda Meir, Indira Ghandi, Margaret Thatcher and Angela Merkel never inspired such polarities. None played the "gender" card because the rest of the world is not afflicted with the sexual politics we suffer in America. The so-called "Mommy Wars" -- with stay-at-home mothers and working moms flinging psychological, economic and political polemics at each other -- are not unknown abroad, but women elsewhere are rarely as confrontational as they are here.

Thatcher and Merkel, for two recent examples, came up "naturally" through the political process. Hillary, on the other hand, is an interloper, having used marriage and inherited connections to get where she is. Thatcher and Merkel look comfortable in their skins, at home in their intellects, secure in the values they represent as leaders and only incidentally as women. There's no bifurcation between what they believe and who they are. Husbands were incidental to the process. No one would have appreciated tears if they accompanied their talk of the stresses of a campaign, merely to show how sensitive they are.

Hillary, by contrast, has gotten as far as she has through the public reaction to her stormy relationship with Bill. When he treated her badly, women rallied around her with empathy and sympathy. When he campaigned for her, it was only right that she use whatever worked. Now that he's an albatross around her neck, it only illustrates the paradoxes of Hillary's rise to power.

Much is made over Hillary's having broken new ground for women in politics, but what her candidacy actually demonstrated was that she failed because of her flaws and shortcomings as a candidate, not as a woman candidate. The e-mails from her campaign, published in Atlantic magazine, revealed her as exploiting the most damning female stereotype, that of a woman who could not make up her mind. It wasn't the stereotype, however, that doomed her pursuit of the nomination.

"What is clear from the internal documents is that Clinton's loss derived not from any specific decision she made but from the preponderance of the many she did not make," writes Joshua Green in Atlantic magazine. "Her hesitancy and habit of avoiding hard choices exacted a price that eventually sank her chances at the presidency."

"Isn't that just like a woman?" the misogynists will surely mock. But that's off the mark. That she couldn't make up her mind to make tough decisions had nothing to do with her being a woman, but with what kind of manager she would make. She was a vacillator, perhaps too smart for her own good, always dawdling over the merits of both sides of the question. Isn't that just like an intellectual?

Adlai Stevenson, defeated twice by Dwight D. Eisenhower, never overcame the taunt that he was "too intellectual," the egghead so open-minded that his brains were likely to fall out. Voters were afraid he wouldn't make up his mind because he saw too many reasonable options. They wanted someone like Harry S. Truman, who having heard his economic advisers talk of "on the one hand this, and on the other hand that," exploded, "Get me some one-armed economists!"

Hillary, like Stevenson, showed herself to be less the pragmatist than the intellectual, waiting like Hamlet for more arguments, more evidence, more reasons why not, until the issue was moot.

She couldn't make up her mind whether to address "the gender issue" after Barack Obama's March 18 speech on race. She was afraid her speech would inevitably equate sexism with racism, which radical feminists have done for years, but perceived by many, particularly blacks, as unacceptable moral equivalence. She dithered until it was too late to exploit the opportunity Obama gave her, demonstrating a fatal weakness of her own.

She will speak at the Democratic Convention in Denver on the 88th anniversary of the ratification of the Nineteenth Amendment giving women the right to vote. That's no coincidence. We've come a long way, baby -- to the happy point that a woman in politics is judged on many things, and being a woman is the least of it. That may not be gender politics, but it's gender progress.