Tempest in a Pastepot: Are We Listening to What Candidates Say? 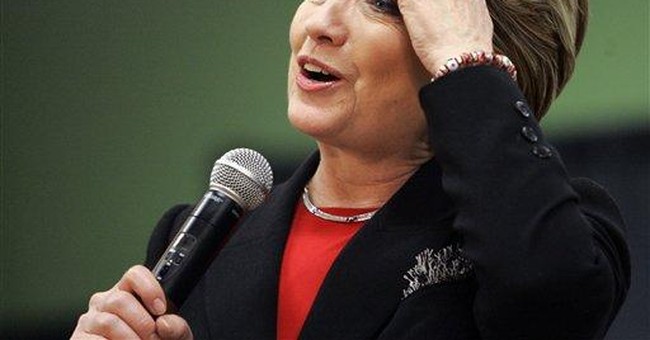 Words! Words! Words! I'm so sick of words!
I get words all day through;
First from him, now from you!
Is that all you blighters can do?

If Hillary Clinton gets a starring role this year at the Gridiron dinner -- the satirical revue by and for politicians, correspondents, columnists and assorted bigwigs in Washington -- she should touch up the words of Eliza Doolittle in "My Fair Lady." The ghosts of Lerner and Lowe might scold her for plagiarism, but Hillary could use humor to needle herself for her part in the silliest campaign contretemps of the season (so far). Nancy Reagan laughed at herself and her enthusiasm for taking expensive threads from high-fashion designers with lyrics taking on the persona of Rose and her "second-hand clothes."

Wordgate -- the fuss over whether Obama actually lifted phrases from Thomas Jefferson in the Declaration of Independence, Martin Luther King and FDR, and pasted them into his own speeches -- is a ridiculous tempest in a pastepot. But it's instructive for calling attention to what we mean by eloquence, which has been getting a bad rap this season, as well as the abused science of plagiarism, which is rife on campus.

An enterprising teacher could ask students to analyze the contents of this frivolous controversy to see if they've got the critical ability to understand what it's about. Could they, for example, identify the source of the quotations lifted from the pages of history by Deval Patrick, the governor of Massachusetts, and Barack Obama? The words are famous enough: "We hold these truths to be self-evident, that all men are created equal," "We have nothing to fear but fear itself" and "Ask not what your country can do for you, ask what you can do for your country."

This could transform a silly argument into a serious enterprise, coming after the Intercollegiate Studies Institute study that exposes the decline of "civic literacy" at our finest universities. In a 60-question quiz given to 14,000 students at 50 colleges, great numbers of freshmen and seniors flunked. A majority of them could not even say where they could find the phrase, "We hold these truths to be self-evident " Some, choosing from multiple choices, thought the source must be the Communist Manifesto.

Students from the most prestigious -- and expensive -- universities were among the worst performers, including Princeton, Duke, Yale, Brown and University of California, Berkeley. Freshmen often scored better than seniors, suggesting that the longer they stay on campus, the more they don't know. We're not talking about arcane questions of political philosophy of the hidden gems of history, but fundamental questions about the most familiar specifics of American history, government institutions and economics.

The "youth vote" is said to be especially crucial this year, and Obama excites young people, but numbers are less important for the culture than what the young people understand about who they are and where they came from. How the senator speaks is not the problem. How we listen is. When two scholars studied the changing nature of the "sound bite" from 1968 to 1988, they tracked the nightly television newscasts and found that the time allowed for the candidates to speak shrank from 43 seconds to 9 seconds.

We require a different kind of tracking today -- how long do we actually spend reading the candidates' words in the newspapers, or listening to them on television or the Internet? If Sen. Obama's rhetoric can inspire young people to listen more closely, maybe he'll engage them long enough for them to understand what he's talking about.

Abraham Lincoln, one of the greatest presidential orators, read deeply into the Bible and the treasures of the Bard. His rhetorical flourishes were nurtured through reading from great writing. Stephen Douglas "won" most of his debates with Lincoln, but Honest Abe won the national attention that ultimately led him to the White House. An observer of the debating styles of the two men discovered why. "Douglas was eminently talented, Lincoln was original," writes Gustave Koerner, an Illinois politician in 1858. "But what made Lincoln vastly more effective ... was that even the most obtuse hearer could see at once that Douglas spoke for himself and Lincoln for his cause."

At this point in the campaign of '08, I'm with Eliza Doolittle:

Never do I want to hear another word
There isn't one I haven't heard
Here we are together in what ought to be a dream
Say one more word and I'll scream.