Susan Stamper Brown
|
Posted: Jan 22, 2017 12:01 AM
Share   Tweet
The opinions expressed by columnists are their own and do not necessarily represent the views of Townhall.com. 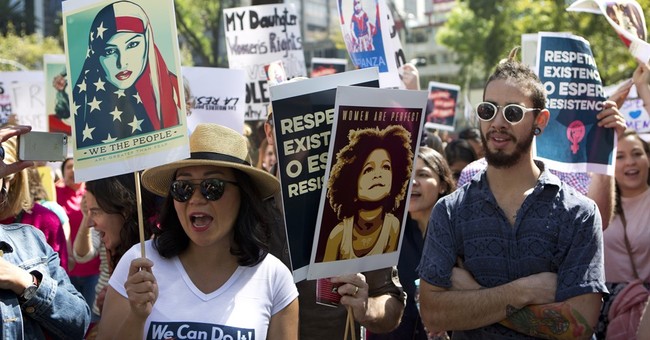 King Solomon once wrote in Proverbs 19:13 the most annoying sound on the planet was a nagging wife, but obviously, he’d never heard what leftists sound like after they lose elections.

Trump Derangement Syndrome will be around for years to come folks, so it might be wise to invest in a good set of earbuds to drown out the whining. Oh, and maybe consider carrying a fire extinguisher in case another anti-Trumper decides to light himself on fire like the guy in front of Trump Tower who said he did it “as an act of protest.”

Congressional Democrats showed who they really are by boycotting Trump’s inauguration while fellow Democrat anarchists chucked bricks, shattered glass, ignited fires and destroyed personal property. Funny thing is, more than 90 percent of D.C. went for Clinton, so the destruction spree only served to injure their own.

The following day anti-Trump women’s marches also turned a little nasty. They began with what sounded like a menopausal outburst by Madonna who welcomed protesters to “the revolution of love” and then shot off a series of F-Bombs on live TV. Madonna also admitted, “Yes, I’m angry. Yes, I’m outraged. Yes, I have thought an awful lot about blowing up the White House, but I know it won’t change anything.”

Actress Ashley Judd partnered in the vulgarities which aren’t fit to print here, but one thing is for sure: Madonna’s and Judd’s clown show inspired lots of people to join the Democratic Party, said no normal person, ever.

I will admit, because of Trump’s colorful past, he brought some of this on himself, but that’s no excuse for this level of stupidity. Their candidate, Hillary Clinton, defended a man charged with raping a 12-year-old-girl. Clinton forced the exclusion of damning evidence which allowed the man to serve only one year for raping and injuring Kathy Shelton who was made infertile as a result. Ms. Shelton told The Daily Mail, “I don’t think [she’s] for women or girls. I think she’s lying. I think she said anything she can to get in the campaign and win.” Clinton also publicly smeared multiple women while defending her own man.

Commentators on MSNBC bragged about the crowd size of the women’s marches but, as a fellow female, I couldn’t help noticing the size of some of the marchers. There is a big difference between crowd numbers and crowd size.

From the TV clips I watched, there’s not a lot of cutting back on salt intake and Big Gulps in New York City. Sure, TV cameras always add a few pounds, but not that many. Some of the footage of the women on bridges was concerning. I recall Rep. Hank Johnson (D-GA) lamenting in 2010 the whole island of Guam might tip over due to overpopulation. Someone might want to check the structural integrity of the bridges used during the marches.

I will compliment them for marching. At this point, any cardio will help, but they should also lay off the chocolate bars like I do when my size 2s get tight. In fact, they should consider marching every day rather than just when Democrats lose elections. MSNBC said protesters clogged the subways and bus systems. They could’ve burned a few extra calories hoofing it to the protest areas. Much of the time the women were immobile, which looked more like a cow auction at the Fort Worth Stockyards than a protest march. MSNBC said the goal of the marches and speeches was to inspire women “to get off the couch and run for office.” Just getting off the couch would be a good start. Grazing slowly on smaller portions also helps.

During the marches, MSNBC commentators suggested the outlandish displays were a hint of things to come as the Democratic Party pushes farther left. Obviously, they are clueless these antics are a YUGE! reason why voters handed Trump the presidency.